Home » Disassociating Stereotypical Manliness from the Definition of Masculinity 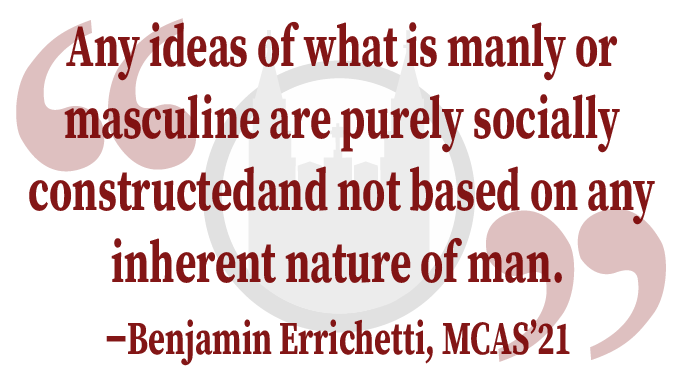 Disassociating Stereotypical Manliness from the Definition of Masculinity

“Can’t man up if masculinity your only weapon.”

This is a lyric from rapper Aminé, in his song “DOCTOR WHOEVER.” In his own words, he “was just letting people know the idea of a man in this day and age is many different things. It isn’t just your average, muscular, degrading women kinda guy.”

I think he has an excellent point. But if the “idea of a man” is many different things, then what meaning does masculinity really have?

In other words, what does it really mean to be masculine? What is a real MAN’s man? Maybe it’s an investment banker. A sleek, sharply dressed businessman, who gets to work early and gets home late, because he needs to make that money. Wealth is masculine. Bread-winning is the essence of manhood.

No no no. Surely someone sitting relatively passively at a desk can’t be a real man. A real man is active. A real man is a young, handsome politician. He goes door to door, connecting with real people, and winning them over with his perfect smile and eloquence. He oozes charisma, drips swag, and has a firm handshake. Eventually, he’s going to win an election, several elections. Maybe even become a congressman. Then he’ll have influence, and he can help shape the world to his liking and make it a better place. Charming, handsome, and powerful. That is manhood.

But that’s ridiculous. Surely, SURELY this cannot be a real man. Real men hunt, and fish. Real men can live off the land and are in tune with their primal side. They have a strong connection to mother nature, and even stronger muscles. They have little time for grooming—besides, a rough thick beard suits them anyway. Masculinity is aggressive and dominant.

So there we have it. A real man is a caveman.

If you were to ask around, perhaps any of these characteristics or any number of other archetypes could be used to describe masculinity. But what do these characters have in common? What about them is inherently tied to “being a man”?

In my opinion, nothing. There is no such thing as masculinity. Any ideas of what is manly or masculine are purely socially constructed and not based on any inherent nature of man.

Ideas about masculinity are fluid—what society views as masculine has changed over time. An article from The Atlantic on the subject of the gendered connotations of the color pink, for instance, quotes Valerie Steele, director of The Museum at the Fashion Institute Technology: “Pink was initially ‘considered slightly masculine as a diminutive of red,’ which was thought to be a ‘warlike’ color.” The evolution of the understanding of pink, which is now considered an innately feminine color, points to the idea that masculinity is not inherent, but socially constructed. And if that is the case, anything can be masculine. Rainbows and feelings could be seen as manly. Or for that matter, nothing could be seen as manly.

Ideas of masculinity marginalize groups—it’s inherent in their nature. If the dominant ideology of the time is that sports, muscles, and aggression are masculine, then men who do not fit this role are placed in awkward positions: They are emasculated men, men lacking the essence of manhood, inferior men. If the roles were reversed, and skinny, docile chess players were the pinnacle of masculinity, the situation would hardly improve. Passionate football players, then, would be relegated to a lower standing in the social hierarchy.

There are practical repercussions to asserting ideas of what “real men” are. In our society, men are not supposed to be emotional. Men don’t cry, men don’t talk about their feelings, men just deal with it.

I attended an all-boys high school—a breeding ground for hyper-masculine competition. Our sports teams excelled, and our fan section emitted a bit of boisterous and aggressive testosterone. Everything was a competition. To this day, I have the urge to compare my grades with everyone in my class as soon as tests are handed back. That’s how we did it in high school. We needed to know who won. It was a place for “real men.”

And in my junior year, two students committed suicide.

I cannot say for sure why these tragedies happen, or what these students were going through to lead them down this path. But no one else had an answer either because no one knew anything was wrong. We were in an environment that emphasized fraternity and community, and yet not a single student in the school knew that our “brothers” were struggling. I don’t blame the school, or the teachers, or anyone at all. My high school strove to and, in my opinion, succeeded in creating a strong community—but men don’t talk about their feelings. Not even brothers.

In “DOCTOR WHOEVER,” Aminé continues his lyrics, rapping, “Man, I’ve thought about suicide a hundred times / But, I’d hate to disappoint and see my momma cry.” I can’t say what might have happened to those two boys from high school if we lived in a world with different expectations of masculinity, but I know there’s a chance that things might have gone differently if these men had been allowed to be emotional. And in this world, no one would have to worry about disappointing and seeing their mothers cry.