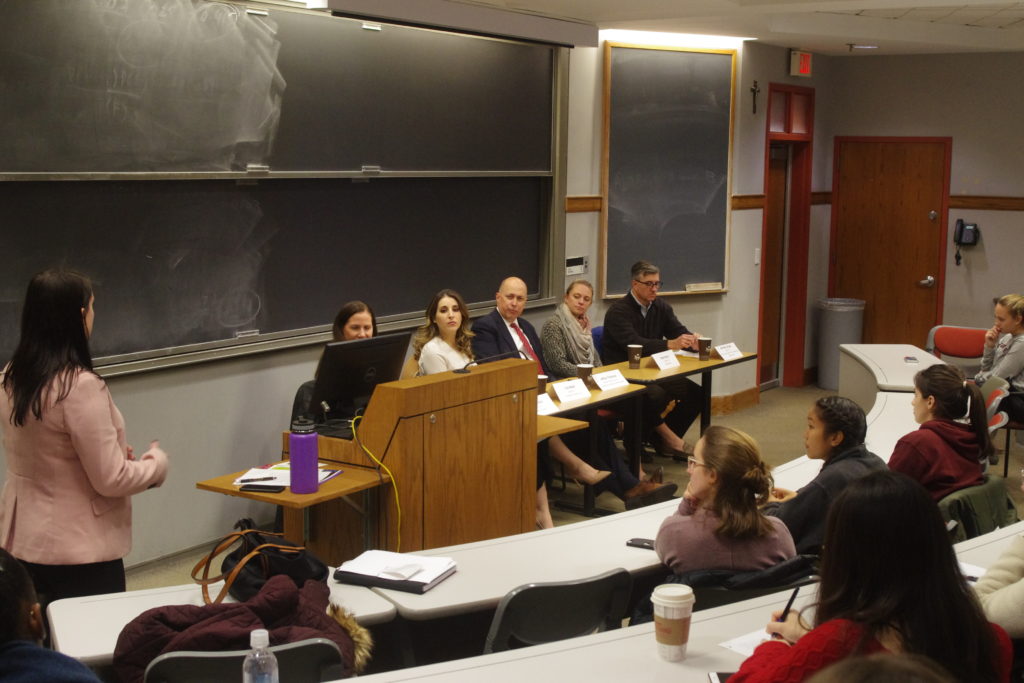 Panelists Credit BC With Global Careers

Five Boston College alumni working in global careers spoke about the experiences at BC that influenced their paths after graduation during the Social Impact Careers panel for International Education week. The Career Center, Corcoran Center for Real Estate and Urban Action, and Office of International Students and Scholars (OISS) sponsored the event.

The “Cura Personalis,” a well-rounded approach to Jesuit education at BC, helped define Lila Abed’s, BC ’12, career path. She is originally from Mexico and treated her four years at BC as her study abroad experience, particularly finding value in the guidance and mentorship her professors offered her.

“The power of analysis and education you receive at Boston College is really top of what is out there,” said Abed, who currently works for Covington & Burling LLP.

Abed said there’s a local aspect to an international experience that brings different cultures closer together. She experienced this first-hand when she ran for local congress in Mexico. Many people in her district had once lived as illegal immigrants in the United States and were dealing with related issues, intertwining local and international issues.

Neil McCullagh, BC ’91, said that everyone studying at BC has an opportunity to pursue something connected to their interests that allows them to exercise leadership skills. He traveled to Haiti during his senior year of college and his experience left a lasting impression on how he approaches his work today at the Corcoran Center for Real Estate and Urban Action.

“You just have to start doing and then people find out what they love and it opens up doors and relationships,” McCullagh said.

Brigid Tobin, BC ’97, has lived across the globe from Ireland to the Netherlands to Hong Kong through General Electric. Each move was increasingly more difficult from both cultural and language perspectives, but immersing herself in different cultures is the most fulfilling part of her career, according to Tobin. She noted that GE employs over 300,000 people worldwide in 180 countries.

“If you don’t have the correct understanding of how to operate globally, you can’t get work done,” she said. “It boils down to really small building blocks. When you work globally, that is the biggest currency you have.”

Jeffrey Thielman, BC ’85, lived in Peru for three and a half years after graduation and found the experience to be “profoundly influential and informative” to the work he does today at the International Institute of New England.

Tobin said that when embracing challenging conversations it is important to try to separate emotions from the facts.

“Emotion can be very powerful, it can move things forward, it can ignite and suppress,” she said. “But in a challenging conversation, I personally have found that checking your emotions, at least for that moment, and focusing on ‘What are the facts?’ can help move the conversation forward faster than arguing and letting emotion bubble up.”

“One of the things that we have found is most important is being really open and vulnerable to failures and also creating trust between all parties,” she said.

Speaking to the theme of the night’s event, moving toward reconciliation, McCullagh said deep riffs are often created when there’s a disconnect in values. He said that resolving these riffs involves understanding someone else’s values and putting your needs aside.

Featured Image by Matthew Trenton / For the Heights