Home » ‘Wet: A DACAmented Journey’ Offers Perspective on Life as an Undocumented Immigrant 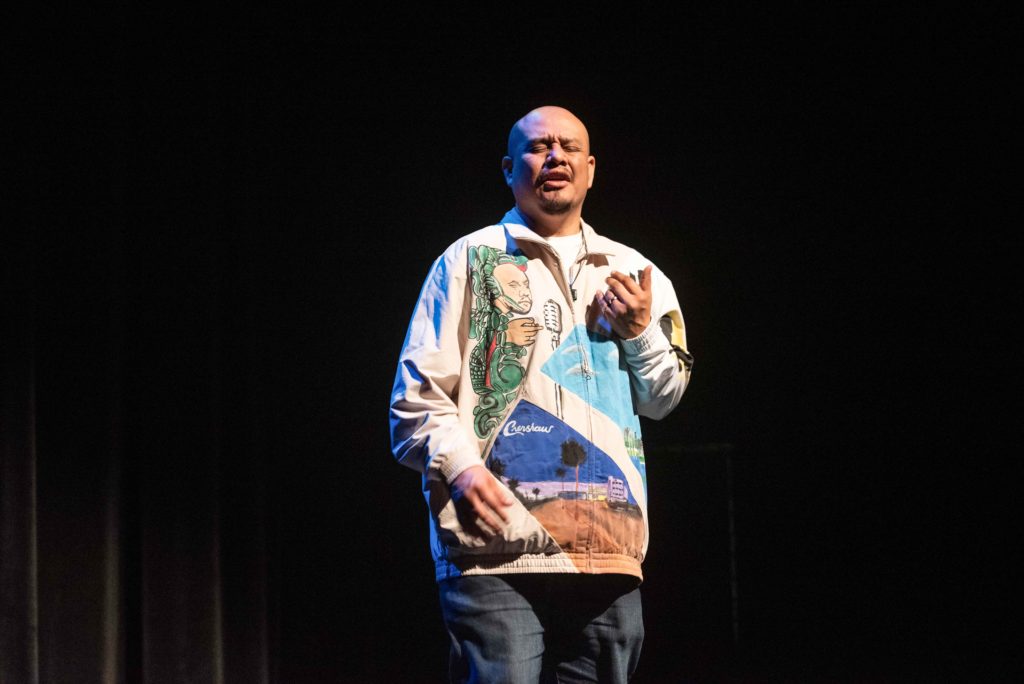 ‘Wet: A DACAmented Journey’ Offers Perspective on Life as an Undocumented Immigrant

A single man wearing jeans and a T-shirt stands in the middle of the black box theater, listing off the slurs kids called him when he was a young student. He moves around the stage, chronicling the events of his life as he transforms from character to character: He’s his mother, his father, the kids at school, the immigration officer who arrests him for being undocumented, the government agents who he tries to work with to remain in the country he has spent his entire life in.

His story builds to the point of panic: Will he be deported from the United States, forced to leave his daughter behind?

But the audience knows what is going to happen—or at least, what the end result will be. Because the man performing is Alex Alpharaoh, the writer of the autobiographical play, WET: A DACAmented Journey, on tour around eight U.S. cities, staged in Boston at the Paramount Center’s Jackie Liebergott Black Box.

Alpharaoh entered the United States when he was three months old when his mother brought him from Guatemala. He grew up and went to school in Los Angeles, but he quickly came to realize that he was different from his classmates. “What are papers?” he would ask his mother. Why didn’t he have any?

His mother’s scolding—telling him to never, ever give someone a reason to believe he doesn’t have papers—was his earliest introduction to the secrecy and fear he would feel for the rest of his life—that is, until now.

Alpharaoh uses nothing but a few stools, a hat, and a jacket as props as he leads the audience through his life as an undocumented immigrant in the United States. As an adult, Alpharaoh hears about a new program started by the Obama administration: DACA. A snippet of a then-president Barack Obama speech plays, listing out the requirements to be considered for deferred action. Alpharaoh sits anxiously, waiting.

Entered the United States prior to your 16th birthday? Check.

Physically in the United States at the time of the request for deferred action? Check.

Currently in school, graduated, gotten a GED, or been honorably discharged from the U.S. military? Check.

Not convicted of a felony, significant misdemeanor, three or more misdemeanors, and does not pose a threat to public or national security?

Alpharaoh rewinds to his college years, when he was caught for working without a valid social security number as he tried to report abuse at the assisted-living home where he was a social worker. Although he was able to take a plea deal for a lesser charge and remain in the country, the arrest didn’t leave him as he tried to continue on in his adult life without any legitimate papers.

For a while, he was able to get by. But his grandfather fell ill in Guatemala, and his mother wanted him to travel with her. By doing so, he risked never being able to return to the only country he’s ever known, and leaving his young daughter alone. The rest of the play follows him as he attempts to get “emergency parole,” which would allow him to leave and reenter the country legally.

Alpharaoh is able to deliver a powerful and informative performance, utilizing only his own emotions and experiences. He tells the audience after the show that his story isn’t over—he hasn’t been able to get his documents. But as he travels and delivers his 90-minute life story, he’s able to live as he wants to, instead of waiting for the other shoe to drop.