Home » MIT’s ‘Lean on Me’ to Launch at BC Next Year
News, On Campus, Top Story

MIT’s ‘Lean on Me’ to Launch at BC Next Year

Lean on Me—an anonymous student-to-student texting service—will be launching at Boston College this January. The service originated at MIT when, after a string of suicides at the university, a group of students decided to create something to support student mental health on campus.

The demand for on-campus counseling, the only institutional mental health resource available for BC students all of the time, has become impractical to handle, according to Reed Piercey, Undergraduate Government of Boston College president and MCAS ’19. Students often wait weeks for an appointment.

“You have people who are going in to counseling for anything, ranging from a really busy week with a lot of stuff going on and feeling overwhelmed, to people who have serious recurring mental health issues, who are at risk of self harm—and so that puts a lot of strain on both the students and the counselors,” Piercey said.

Lean on Me comes in by helping the people on the lower end of this spectrum—those who are feeling overwhelmed or lonely, don’t have anyone to talk to, or are lacking support from their friends, he said.

“They now have an instantly available service that they can reach out to and have that conversation with,” he said. “So that means that people with more clinically serious mental health issues can have more access to counseling, and the people who need that support, the lower-end support, more often can get the support easier.”

To use Lean on Me, students will just text the hotline number, and they will be anonymously connected with a trained student supporter. Both the student and the supporter see only the phone number of the hotline, and never the number of the other person.

The service will be available for students virtually 24/7, only depending on if any of the trained supporters are awake. The supporters won’t be working shifts—rather all the active supporters will be notified and have an opportunity to take the conversation anytime someone texts in.

“It’s instantaneously available,” Piercey said. “It’s for pretty much anyone with any kind of concern who wants to just blow off some steam, talk to someone, express what they’re going through—short of having an issue that does require professional mental health support.”

The idea for bringing this type of service to BC was born in the spring semester of Piercey’s freshman year, when he became a volunteer at the Samaritans suicide prevention hotline in Boston. The experience led him to think that BC could use a resource built around what he called the “Samaritans mentality”—the idea that allowing the other person to open up to you about what they’re going through, and just sitting there and listening to what they have to say, is the most powerful tool a supporter can have.

“That mindset can address just so many of the issues that come up,” Piercey said. “It’s not really about saying the right thing to them. It’s just about asking the right questions so that they can feel comfortable talking, and then all that really matters is that you communicate that you are there, that you’re hearing them, and then validate the way that they’re feeling in that moment.”

Piercey, at first, wanted to implement a mental health service on campus where BC students could talk to trained students in person. But upon talking to one of the leaders of UGBC at the time, it turned out that such a program had already been implemented in the past, but it was unsuccessful—it encountered difficulties drawing the boundaries of the student-supporter relationships, and few people used it.

Piercey thought the idea over and realized that a text or phone line potentially would work better, as it would remove the problems of in-person contact and set more of a boundary for the student-supporter relationships. In talking with one of his supervisors at Samaritans, he learned that students had started a program like this at MIT.

Realizing it would be more practical to work with a pre-established program rather than start one from scratch, Piercey contacted the organization in the winter of his sophomore year, and he reached out to people to create the first e-board of Lean on Me: BC, with Piercey as the chapter president. Piercey wrote and passed a resolution within the Student Assembly to create the BC chapter of Lean on Me as a branch of Student Initiatives within UGBC.

The program was initially scheduled to launch in the fall of 2017, but because of liability issues and other legal pieces involved, the process had to be extended. The BC chapter will now launch in January with the 10 supporters it currently has, but it aims to recruit around 15 more, according to Piercey. Students will have to complete around five hours of in-person training, in addition to a few hours of online training, to become supporters.

The service is not intended for situations in which a student would normally contact a suicide hotline or other emergencies that require clinical support from a psychiatrist, Piercey said. If a supporter starts to believe, however, that the person they are talking to is imminently at risk of self-harm, they will be able to transfer the text to a volunteer at Samaritans, who will have had more extensive training to handle the situation.

“It’s intended to just be the lower-end, instantly accessible mental health resource on campus, which I think we’ve been missing in the past,” he said. “Everything right now pretty much involves scheduling an appointment and going through that more intensive process. So I think it will be an important element of campus life. And hopefully it will make everything easier in general.”

Featured Image Courtesy of Jess Rivilis / For the Heights 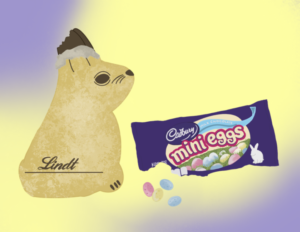