Home » In Pivotal Moment, Steve Addazio Chose to Punt the Game Away 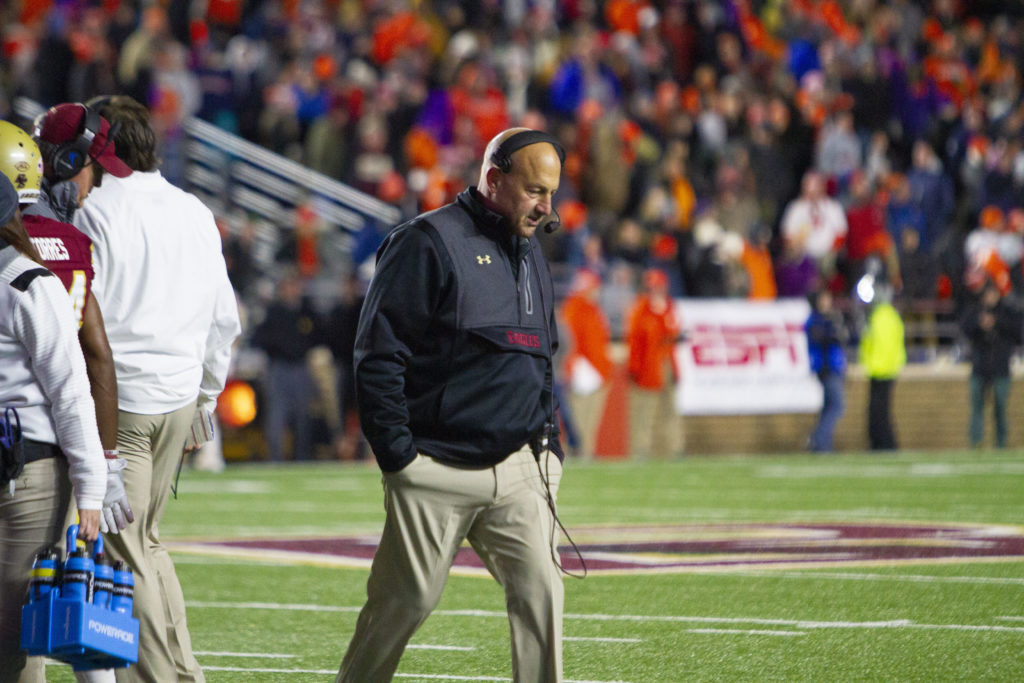 In Pivotal Moment, Steve Addazio Chose to Punt the Game Away

With 2:52 on the clock and a five-point lead, Boston College football found itself in a 4th-and-1 situation from the Florida State 40-yard line. The Eagles had already gone for it five times on the day, converting three of them, and had earned a first down in the same situation just 11 minutes earlier. Steve Addazio opted to take a timeout—his last of the half—then returned the offense to the field. The unit was merely there in an effort to draw the Seminoles offside, and when that didn’t happen, BC took a delay of game penalty and Grant Carlson punted to the FSU 13-yard line.

“How hard of a decision? I felt pretty good about it,” Addazio said after, per BCEagles.com, on choosing to punt it back to the Seminoles.

Three plays later, the stadium was rocking, as FSU quarterback Deondre Francois found teammate Tamorrion Terry for a 74-yard touchdown, one that would hold up as the game-winning score in a 22-21 loss for Addazio’s Eagles. The decision that Addazio felt good about, quite simply, was an inexcusable miscalculation. Paired with his burning of a timeout in crunch time, it handed BC a loss that knocked the Eagles out of the national polls and seems destined to send them to yet another 7-6 season—the fifth in six years for the head coach.

The decision, in hindsight, makes less and less sense. Addazio has been more aggressive than years past this season, and that was evident by the five previous fourth down attempts. Two of those, even, came on the Seminoles 40-yard line. The Eagles converted 4th-and-1 in the first quarter with a three-yard Travis Levy run, then came up short on a 4th-and-4 from the same territory. So, Addazio’s justification in the press conference that he was worried that the “ball was darn near midfield like that,” didn’t make much sense—he trusted his defense plenty earlier. That failed fourth-down conversion had ended in a field goal from the Seminoles, with BC’s defense bearing down after giving up a long throw and forcing Willie Taggert to turn to his kicker. Three points, obviously, wouldn’t have been enough to thwart the Eagles in the final minutes of regulation.

The other two conversions for the Eagles? They also came on 4th-and-1, running their mark on 4th-and-short to an impressive 3-for-3 on the day. Along with a three-yard rushing average and a conversion rate on the season upwards of 50 percent on fourth downs, everything suggested that BC would have a better than even shot of getting the first. Both the New York Times’ 4th Down Bot and SBNation’s Football Study Hall suggest, through visual charts considering field position and distance, that Addazio should have gone for it.

A more detailed look at those situational numbers furthers the case against the Carlson punt, too. A look at Pro Football Reference’s win probability calculator makes a pretty damning case. In those situations, teams hold a 87.89 percent win probability. With a successful first down—say Levy, Brown or likely an overworked A.J. Dillon sneaks through for a yard or two gain—BC’s win probability leaps to nearly 97 percent. After all, it has a fresh set of downs, and while the Seminoles had their full complement of timeouts, the Eagles would need just one more first or another score to put it out of reach.

Should BC fail to convert, instead turning the ball over to Francois and FSU at its own 40-yard line, the win probability dips to around 75 percent. After all, the Seminoles will still need to go 60 yards in around two and a half minutes. Even with the second-half success Francois and running back Cam Akers were enjoying, two of the previous three FSU drives were three-and-outs and the other was a field goal—again, three points wouldn’t be enough. Zach Allen was enjoying arguably his best game of the season, and while the Seminoles were finding chunk yardage at times in the second, they’d still mounted just two drives of 60 or more yards and just one of the two had ended in seven points.

BC punted, though, and as a result, saw its win probability dip to roughly 80 percent. The argument many would make as a product of these numbers is that 80 percent after the punt is greater than 75 percent if they’d fail, so Addazio was clearly justified—but that 5-percent margin is minimal enough to take a risk and play to win. That argument fails to take advantage of the Eagles conversion rate on the year, however, something that The Heights’ senior staffer Ben Thomas pointed out on Twitter after the game.

Thomas makes the point that, if you attempt to find a team’s fourth-down conversion rate that would yield the same win probability as if the team punted or failed to convert, it’d equal 43.7 percent. That rate is a full eight points lower than BC’s season average to that point, of 51.9 percent. So, Addazio’s postgame press conference, in which he said “I know [punting] was the right call there],” wasn’t quite correct. He obviously had faith in his team on fourth downs or he wouldn’t have already gone for it five times in the game.

He was playing conseratively and failed to take advantage of a chance in which the numbers suggested his offense should stay on the field to try and seal the deal. If he had gone for it, failed, and FSU scored on the other end anyway, the postgame press conference would likely strike a different tone. But, at least the numbers would be on Addazio’s side—and fans of the program would at least be pleased that their frustrating head coach was finally playing to win.

Addazio’s time at BC could be running out, especially if the Eagles fall against Syracuse in the season finale and fail to win their ensuing bowl game. BC had plenty of chances to pull away from the Seminoles and didn’t, so singling out one late-game decision might seem like an overreaction. But, with Addazio, these consistently faulty in-game decisions he’s making do more than enough to offset his strengths in recruiting and player development. This one, however thin the margins, was enough to spur controversy and sent the Eagles home with a second-straight loss.