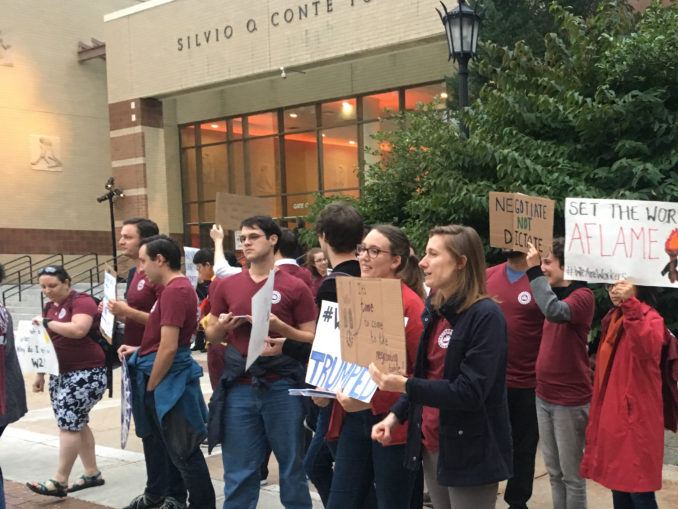 The Boston College Graduate Employees Union (BCGEU-UAW) released a letter on Oct. 31, in which it said that the University had disciplined over a dozen graduate students in response to flyering efforts on Sept. 28. The union and University have since clashed over the matter over which discipline has been handed down.

On the night in question, members of the union protested the administration’s refusal to recognize the group by walking out of an address in Robsham Theater by University President Rev. William P. Leahy, S.J., and picketing outside of Pops on the Heights in an attempt to push the union cause to a larger audience—specifically an audience that actively donates to the University. Several members of the BC Police Department and Dean of Students Tom Mogan told the protesters that they could continue to flier as long as they remained within a designated area, which the union agreed to after internal discussions.

“And now your administration has opted to unjustly discipline more than a dozen graduate student workers who engaged in peaceful efforts to distribute leaflets and exercise their free speech right to inform the public of the college’s refusal to bargain,” the letter said.

On Tuesday, University Communications responded with a statement saying that the punishment was only in response to the walkout, rather than the distribution of leaflets outside of Conte Forum.

“Administrators cite a petition launched on October 31 by union supporters that claims that a group of BC graduate students was disciplined for ‘distributing leaflets’ on the BC campus,” the release said. “Rather, administrators say, the students were found responsible for interfering with a public event and infringing on the rights of others to hear a presentation in Robsham Theater on September 27 [sic].”

The release also characterized the union’s letter as “the latest in what administrators say is a series of false statements made to bolster support of unionization under the umbrella of the United Auto Workers.”

Members of the union, however, said that there were actually two rounds of discipline: one for the walkout and another for flyering outside of Pops on the Heights.

One graduate student who wished to remain anonymous said that the union made a choice to publicize the second round of punishment to push back on what it perceived as an intimidation tactic to suppress worker speech on campus.

The administration summoned 16 students to disciplinary hearings for Oct. 24 and Oct. 25, according to union members. Approximately 35 students participated in the picketing and flyering.

A copy of the summons sent to The Heights specifically mentioned an unauthorized demonstration that occured at Conte Forum, not Robsham Theater. The summons opens by saying the following:

“The Office of the Dean of Students has received a report about an alleged violation of the Code of Student Conduct in connection with an incident involving an unauthorized demonstration that occured on September 28, 2018 in the following location: Conte Forum.”

On Oct. 31, the Dean of Students office notified the 16 union members that they had been issued an administrative warning for violating section 4.6.9 of the student code of conduct, which holds that “all activities in the nature of a public speech, rally, demonstration, march, protest or other coordinated event (“demonstrations”) must be registered and approved in advance by the Dean of Students.”

“In accordance with federal law, the University does not discuss specifics regarding student disciplinary matters,” University Spokesman Jack Dunn said in an email. “The University released a statement this week to correct misinformation from the [United Auto Workers] and its supporters. We will continue to challenge any false assertion regarding grad student unionization.”