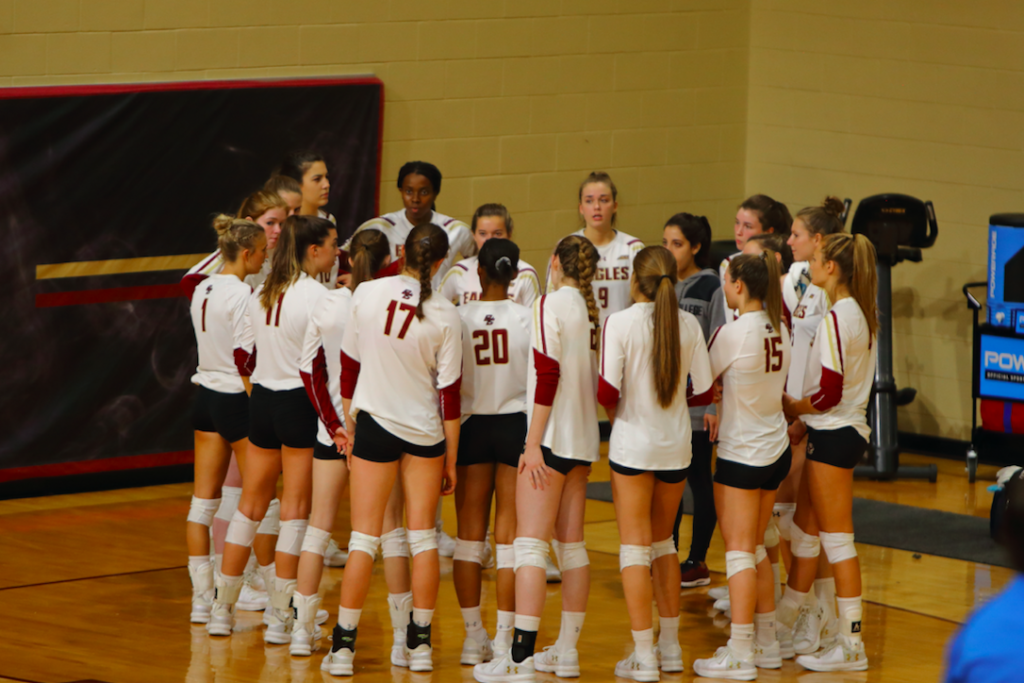 With a chance to post its first winning season in 14 years, Boston College volleyball just had to solve one nagging issue—its inability to win on the road. The Eagles entered Friday night’s matchup against Clemson winless in eight conference games away from Power Gym, and, in a five-set heartbreaker, BC squandered a 2-1 set lead and fell to the host Tigers in five.

The Eagles (15-15, 5-13 Atlantic Coast) led in the fourth set, 22-20, finding themselves just three points away from what would be a monumental victory for a program that hadn’t recorded a winning season since 2004. Instead, Clemson (17-14, 8-10)—which had led by as much as seven earlier in the set—rattled off five of the next six points to firmly swing the momentum to its side. The Tigers promptly won the decisive fifth set on the strength of a similar 6-1 run, building an early lead before handing BC a tough, evenly matched road loss.

The season finale got off on the wrong foot, as the Eagles dropped the opening set, 25-18. A .108 hitting percentage from BC was difficult to overcome, as errors from Jewel Strawberry, Amaka Chukwujewku, and Clare Naughton gifted Clemson points. The Tigers scored the first four points of the set and managed to keep their distance, never letting BC closer than three points.

The next two sets, though, showcased just how much the Eagles have improved this fall. The Tigers stuck around in the second set, with the two teams playing equal through the first 20 combined points. Eventually, McKenna Goss came up with a kill to give BC an 11-10 lead, sparking a mini-run that pushed the Eagles ahead until later in the set. Clemson managed to rally, equalizing at 18, but a pair of Tigers’ errors and a Sophie West kill gave BC the breathing room it needed to win, 25-21.

In the third set, the Eagles were nothing short of dominant. Clemson’s woeful .050 hitting percentage helped BC get out to a 7-1 lead right off the bat, one that it would stretch to 20-9. The Tigers were able to answer somewhat, but still couldn’t close it to single digits in the set.

The Eagles had chances to win the match in the next two sets but would ultimately fall, 25-23 and 15-10, again faltering on the road. The 0-9 record in ACC road games is a glaring problem for BC, as it has faced similar struggles the last few years. Still, it’s very early in Kennedy’s rebuild, and the .500 season is a milestone in that bounce-back process.

It marked the end of a largely successful campaign for first-year head coach Jason Kennedy, who should be rightfully lauded for his and his team’s efforts. Last season, the Eagles went just 7-23 and lost seven of their last eight games. While BC struggled in conference play, suffering losing streaks of five and six games apiece, it still managed to largely close on a high note, winning two of its final three and finishing an even .500.

Goss, a senior finished her career with an 18-kill outing, equaling the Tigers’ Brooke Bailey for the top mark in the match. She also had a service ace and 13 digs in the loss, wrapping up a career in which she played in 119 matches over four years. The only other senior on the Eagles, Camille Oemcke, had four assists, second on the team.

With the rest of the roster coming back, there’ll likely be a lot of optimism surrounding BC in 2019. The Eagles saw a season-best performance from West, a junior, against Clemson—she registered 14 kills, five more than her previous high. Junior Jane Dejarld followed it up with 48 assists, also a season-high, and Strawberry, a freshman, added 11 kills and 15 digs. Those three alongside Jill Strockis (18 digs), help form a core that Kennedy can lean on to take the next step up from a 15-win season.