Home » Is There Room for College Teams in Boston’s Sports Pantheon? 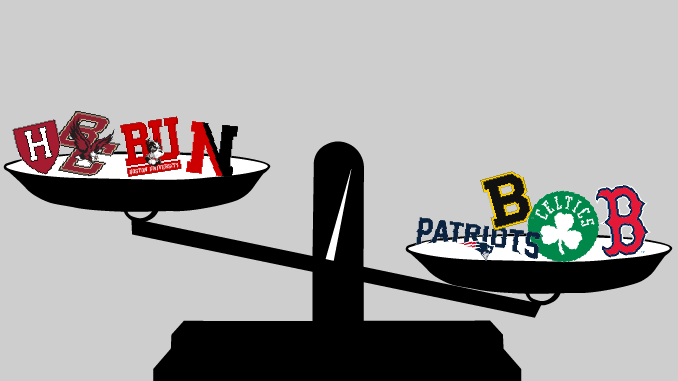 Is There Room for College Teams in Boston’s Sports Pantheon?

As a sports fan amid the BC-Clemson buzz last week, I had a handful of people ask me if was excited for the game. Although of course I wanted BC to win, I could not muster up a level of anticipation that one would expect for a game that was dominating conversations across campus. After thinking more about why this was the case, I realized that my upbringing as a Boston sports fan completely omitted college sports.

I would say the majority of sports fans from Massachusetts devote all their sporting attention, needs, and energy toward the state’s professional teams rather than its college teams. Just last weekend, the Patriots’ surprising Week 10 loss to the Tennessee Titans rocked the city of Boston as if it were a playoff game—we always expect the best.

The Pats, Sox, Celtics, and Bruins reserve such a high status in the universe of a Boston sports fan that we generally do not crave the success of any other teams. Spirited alums and current students, however, prove to be an exception to this trend.

Alex Reimer, co-host and columnist for Boston’s leading sports radio station, WEEI, commented on Boston’s association with the center of the sports universe in a column last week.

“These proclamations of grandeur ignore the fact that college football, arguably the second-most popular sport in the U.S., is not on our radar,” he said. “Boston is a professional sports town.”

Schools like Clemson, Alabama, and Georgia define much of the sports culture in their states. Besides regional and cultural disparities that cause this phenomenon, the inconsistent success of much of these areas’ pro-sports teams seems to be a prevalent factor in this difference. While the Atlanta Falcons and Braves, and the Carolina Panthers, certainly have their good days, they have not proved able to consistently deliver, while Alabama does not even have a major professional sports team.

On the other hand, Boston fans’ emotional attachment to our teams is so heightened and intertwined with individual players that making space for college sports in Boston’s ballpark proves challenging.

The recent BC-Clemson game did, however, create a buzz throughout the surrounding Boston area, while BC itself enjoyed a wave of school pride. Even though the game drew viewers who may usually reserve their weekend game time for the Patriots, it would be fair to say it did not match the excitement it would have stirred up throughout the whole state if our pro teams weren’t so iconic. But nonetheless, the undeniable interest in BC football in the greater Boston area last weekend may allude to a future for college sports in the pantheon of Boston sports teams.

Reimer even acknowledged that the increasing TV ratings for BC’s games this season show growing interest.

“There is a thirst for BC football,” he said. “It just has to be unearthed.”

For now, the Pats and Sox continue to rule among the priorities of the typical Boston sports fan, but college football may just inch further onto the radar in years to come.