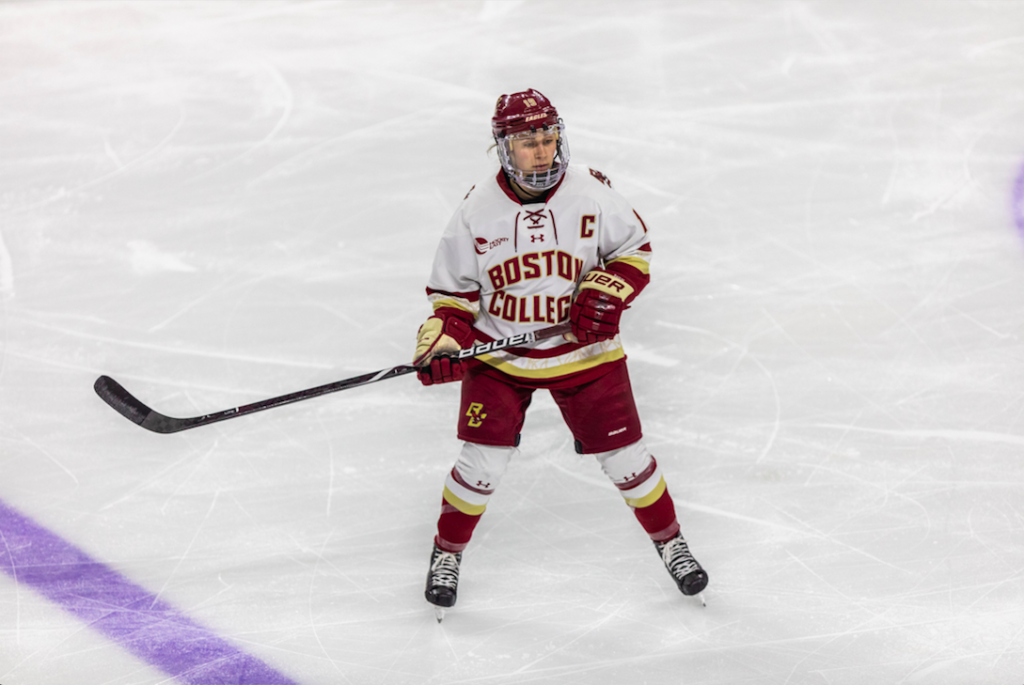 Boston College women’s hockey faces its biggest conference test of the season when it travels to face local rival Northeastern Tuesday night. The No. 4 Eagles (12-3, 9-1 Hockey East) have righted the ship after a loss to Providence at the start of November by reeling off four consecutive wins—including a thrilling 4-3 victory over BU—but will have their hands full with the No. 5 Huskies (11-1-2, 10-0-2), who haven’t lost since Oct. 12.

The game will be televised on NESN and livestreamed on GoNU.com.

1) BC is one of Hockey East’s elite defensive teams, as the Eagles allow just 1.27 goals per game, the fewest of any team in the conference.

2) BC has a wealth of talent offensively. Makenna Newkirk and Megan Keller are tied for the team lead with 17 points, but a total of seven Eagles skaters have accumulated at least 10 points thus far in 2018-19.

3) Maddy McArthur has performed admirably in her first season in net for BC. She has four shutouts, tied for the most in the country, and 1.29 goals against average.

1) The Huskies carry the longest unbeaten streak in women’s hockey into their matchup with the Eagles, as they haven’t lost in 11 games. Northeastern’s last loss was on Oct. 12, when it fell to then-No. 8 Colgate.

2) Two rookies have made an instant impact for the Huskies, with Alina Mueller and Chloe Aurard leading the team in scoring. Mueller and Aurad have recorded 21 and 19 points, respectively.

3) Aerin Frankel and Brittany Bugalski have split time in goal for the Huskies, even though Frankel has been the better of the two this season. She has a 0.72 goals against average, while Bugalski’s is substantially higher at 1.96.

The teams last met in the first round of the 2018 Beanpot. Daryl Watts scored twice in the first period, and Newkirk added a hat trick as BC pulled away in the third period, winning, 5-2, and booking its ticket back to the Beanpot championship.

The Huskies are undoubtedly the top threat to stop BC from claiming its sixth-straight Hockey East regular season title, and they currently hold a four-point lead over the Eagles in the conference standings. This will be a matchup of the top-two defensive units in the conference, and whichever team is more patient and cohesive on the offensive end will likely have the advantage. Northeastern does have a pair of budding superstars in Mueller and Aurard that BC will have to be wary of, but the Eagles should still feel good about their chances to win because of their experienced defensive unit and top-tier offensive talent. BC also has history on its side, as it took the season series last year and is 43-14-5 against the Huskies since Hockey East was formed in 2002.