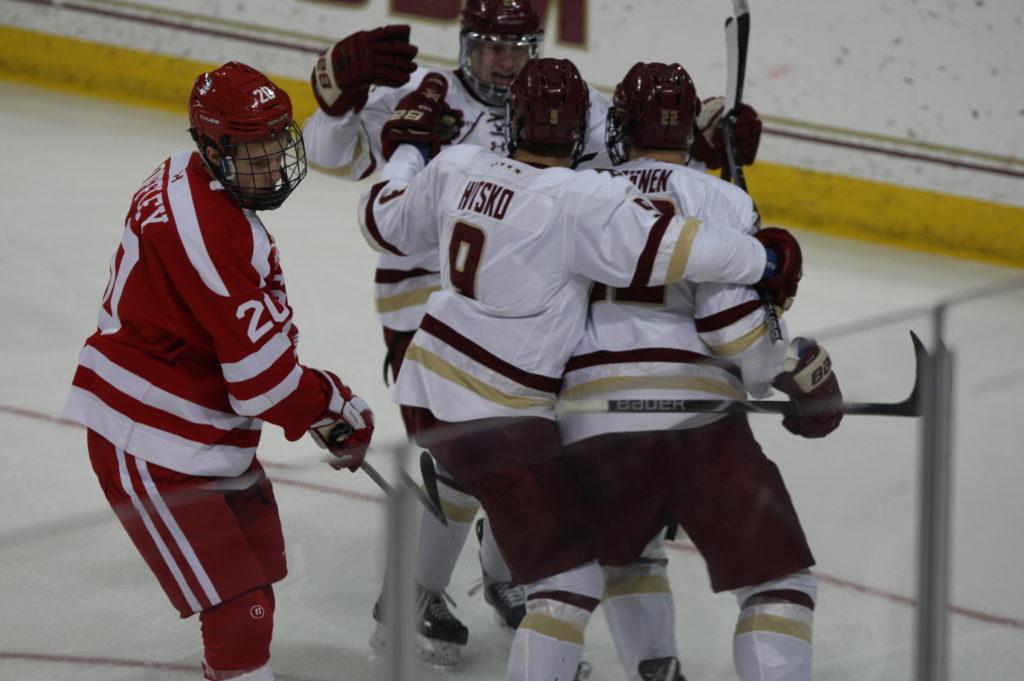 The last time Boston College men’s hockey boasted a record under .500 on Nov. 30 was the 2007-08 season. At the time, the Eagles were 2-3-5, with losses to Massachusetts and New Hampshire, two teams that BC has historically owned. That night, the Eagles faced off against Boston University, and won 6-2, in large part thanks to a hat trick from Nathan Gerbe.

So when the Eagles, again under .500 on the last day of November, beat the Terriers 4-1 at Agganis Arena on Friday night, it was a reminder of two things. First? The college hockey season is long, and a slow start doesn’t necessarily mean the season is doomed. That 2007-08 BC team won seven of its next eight games to right the ship, and ended the year as national champions. Perhaps any prognostications about the state of this Eagles team are premature. And second, a win over a rival, especially a comfortable one, can be a cure for a lot of woes.

When the game started, BC (4-6-1, 4-1-1 Hockey East) was anything but comfortable. Just one minute and 19 seconds into the game, after Joel Farabee pushed a shot wide of Joseph Woll’s net, Jack McBain hit the BU (4-7-1, 4-4-1) freshman—and 14th overall pick in the 2018 NHL Draft—high, earning himself a five-minute major penalty and game misconduct.

The Eagles were able to kill off the penalty without much difficulty, as Woll had to make just one save, on a shot from Bobo Carpenter that he was able to easily corral. BC’s penalty kill, however, wasn’t as good the next time the Terriers earned a one-man advantage.

Just 45 seconds after the five-minute major penalty was over, Aapeli Räsänen was sent to the box for boarding, and it didn’t take long for BU to convert. Just 19 seconds into the power play, Farabee dumped the puck down to Shane Bowers, who had taken a position up to Woll’s left. Bowers sent a nifty pass across the goal to Chad Krys, who had crept down below the left dot, and the junior pushed a shot inside the near post to give the Terriers a 1-0 lead.

Soon enough, BC had chances to knot the game up—J.D. Dudek cycled the puck to Marc McLaughlin, who let a one-timer rip that was saved by BU netminder Jake Oettinger. The rest of the period saw the Terriers continue to have the better opportunities, though. Woll made four more saves before Räsänen was able to climb out of the box and make another stop on a drive from Patrick Harper just before the buzzer sounded for the first intermission with BU still on top.

Yet the biggest save that Woll made came halfway through the second period. After the Terriers killed the first Eagles power play of the game, Joel Farabee had a golden opportunity to double the BU advantage, as he found the puck in the crease and tried to score on a low shot. Somehow, Woll was able to kick the puck away with his skate, and BC cleared.

On the other end, McLaughlin won a faceoff, and the puck ricocheted to the stick of Logan Hutsko, who had taken a position in the slot. The sophomore, who has again been one the Eagles’ standout offensive performers this season, sent a slapshot between Oettinger’s legs. Seconds after BU could have grabbed a two-goal advantage, the game was instead tied.

BU looked to respond, and had a good chance to do so when Graham McPhee was penalized for interference. The Terriers peppered the BC net with seven shots in the next two minutes, but found themselves again stymied by Woll, who finished the night with 38 saves. And when the teams were back at even strength, the Eagles once again made BU pay for its missed chances.

Julius Mattila won a faceoff at center ice, and David Cotton controlled the puck before skating across the blue line and feeding Hutsko in the right circle. The junior delayed for a second before firing a shot that found the net high on Oettinger’s glove side. All of a sudden, BC had turned the game around and headed to the locker room after the second period, leading, 2-1.

BU once again flooded the offensive end to start the third period in search of an equalizer. The Terriers had seven attempts in the first five minutes, but Michael Kim and Adam Samuelsson each blocked a shot, and Woll made two saves to continue to frustrate BU. Then, five minutes into the period, Oliver Wahlstrom dug a loose puck out behind the goal line, and waited a second before threading a pass to the front of the net where Christopher Brown was waiting. The senior slapped a shot through Oettinger’s legs to give BC some insurance.

From there, the Eagles simply sat on their lead, packing their defensive zone and putting bodies in front of Terriers efforts on goal. Christopher Grando deflected two attempts, and even Wahlstrom managed to get a piece of a wrist shot from Jake Wise. BU got desperate and sent Oettinger to the bench for an extra skater with two minutes remaining, only to watch Marc McLaughlin win a race to a cleared puck and score an empty-net goal—the first scoring play of his collegiate career—to seal a big win for BC.

A win over a similarly underwhelming BU team still doesn’t solve a lot of issues for the Eagles. Outside of the Cotton-Mattila-Hutsko line, BC still struggles to find offense. And, on the defensive end of the ice, the Eagles haven’t been able to prevent rebound chances—Woll was fortunate not to concede a goal on a couple of spills in the second period. What the win does provide, though, is a sense of optimism. This is the optimism that BC’s issues are fixable, and that a run like the one that followed the Eagles’ win over BU in 2007 could be lurking around the corner.