The Walking Dead aired the midseason finale of its ninth season, “Evolution,” on Saturday night. So far, Season 9 has marked a turning point in the series’ storytelling with both the departure of lead character Rick Grimes (Andrew Lincoln) and a “time skip” in the show’s universe.

“Evolution” continues the mystery the show has laid out in the previous two weeks since it jumped six years into the future. This time skip has allowed for characters, such as Judith Grimes (Cailey Fleming) and Henry (Matt Lintz), to grow up and fall into more prominent roles that have been left empty with the recent departure of main characters.

With both Rick and Carl (Chandler Riggs) now gone from the show, Judith is the last surviving member of the Grimes family, and while she used to be just a child, the audience now sees that she is a zombie-killing teen who is more than capable of carrying her weight. Similarly, Henry underwent a transformation in the years that passed, growing up from being a helpless orphan boy to the brave prince of the Kingdom survivor community.

“Evolution” will long be remembered as the episode that introduced the audience to the “Whisperers.” The Whisperers are the heir apparent to Negan’s Saviors as the show’s antagonists. The Whisperers are an intriguing new foe for the show’s heroes, as the group disguises themselves among herds of zombies both to camouflage themselves and to use the herd as a weapon. In “Evolution” they use this tactic with terrifying success.

The two episodes prior to “Evolution,” which showed the beginning of the action taking place after the time skip, felt jumbled and simply told the audience what their favorite characters have been up to for the past six years. “Evolution,” on the other hand, finally got the wheels turning again. There is a new enemy approaching and new characters are taking the spotlight, and the show is actually interesting again.

Without going into spoiler territory, “Evolution” also has The Walking Dead’s best cliffhanger in years. Fans of The Walking Dead usually can expect a major character death in midseason finales, but in this case, the tragedy was especially emotional and gut-wrenching. In recent seasons, The Walking Dead has struggled to deliver truly moving character deaths that offer more than just shock value, but “Evolution” breaks this trend. The show does not air another episode until February, and the cliffhanger will leave viewers clamoring for any information they can get between now and then.

Above all else, “Evolution” is a sign of the promising storytelling that The Walking Dead can accomplish in the future. The Walking Dead may be in its ninth season, but the show is so unrecognizable now that “Evolution” can almost be considered the pilot of a brand-new series.

The post time-lapse world  is intriguing and mysterious, the Whisperers pose a new frightening threat, and the revamped cast of characters has given The Walking Dead new life. 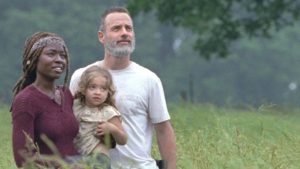