Boston College women’s basketball is coming off a packed stretch in which it played three games over the course of four days. The Eagles won the Hawk Classic, but dropped its first game of the season to Providence. After exploding for 113 points against Rider, BC (6-1) did not see many of its shots fall against the Friars and fell in a close game. Visiting Conte Forum is a Columbia (2-5) team that won its first two games of the season but has since lost five in a row, the most recent being an overtime loss to St. Joseph’s on Thursday. This presents a perfect opportunity for the Eagles to rebound from a disappointing loss and get back to its winning ways.

Who is BC playing?
Columbia

How to Watch:
The game will be on ACC Network Extra and available on WatchESPN.

BC:
1) In their Tuesday night loss to Providence, the Eagles simply couldn’t hit their shots. As a whole, BC put up 73 field goal attempts, only hitting 22 for a poor 30 percent clip. BC once again struggled convert 3-pointers, making only 2-of-16 from a distance, a similar performance to earlier in the season against Holy Cross, where it shot 3-of-26.

2) The Eagles come into this game with 132 assists on the season. That mark doubles its opponents’ figure of 66. Taylor Ortlepp, the versatile junior guard, leads the team with 32 assists.

3) Freshman guard Marnelle Garraud leads BC in scoring with 15 points per game. Garraud is able to score in large part thanks to her 47.5 shooting percentage from beyond the arc as well as her 91 percent free throw percentage.

Columbia:
1) Columbia has not been able to make much of an impact on the court for the past couple of seasons. Last year, it finished dead last in the Ivy League, and a year before that, it finished tied for seventh. Already off to a 2-5 start, the Lions do not seem to be snapping the trend.

2) Sienna Durr is Columbia’s main threat on the court. The freshman leads the team in scoring with 14.1 points per game and is also tied for the team lead in rebounds with 44.

3) On average, Columbia pull down 38.1 rebounds per game. In BC’s last game, Providence outrebounded the Eagles by eight rebounds. The Lions are formidable at grabbing boards, so it will likely be a tight battle on the glass.

Last Meeting:
This is the second meeting between the Eagles and the Lions. These two teams met last year, a game in which Columbia prevailed, 68-60. Despite 22 points from Georgia Pineau, BC still fell in New York.

Outlook:
Columbia traditionally doesn’t boast a strong basketball program, and coming off of five straight losses, the Lions do not come into Chestnut Hill with a lot of confidence. BC’s six-game winning streak was finally snapped as its cold shooting ultimately led to its downfall against the Friars. But, with Columbia coming to Conte, this matchup presents itself as a prime bounceback opportunity for the Eagles. BC’s high powered offense greatly outclasses Columbia’s, and it bests the Lions in almost every facet of the game. While it’s unlikely that the Eagles will put up 100 points like they did against Rider, they should be able to cruise to an easy victory if they make their field goals at a more consistent rate. 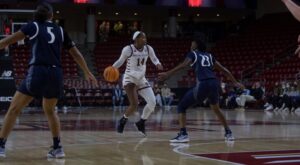