“thank u, next” Video Borrows from ‘Mean Girls,’ ‘Legally Blonde’

Garnering over 73 million views on YouTube in the three days since its release, Ariana Grande’s “thank u, next” is quickly becoming a cultural touchstone. The music video draws from a number of classic romantic comedies (and Mean Girls, which isn’t really romantic, but is certainly a comedy). In rooting itself in established properties of the past, “thank u, next” ensures its staying power. Often, content that pulls from pop culture quickly becomes dated. This is not the case with Grande’s new music video.

The video begins with a series of scenes in which characters dressed as movie high schoolers talk about the things they’ve heard about Ariana Grande. For example, one girl says “One time, on Twitter, I heard Ariana was pregnant, so I got pregnant so we could be pregnant at the same time. Turns out it was just a rumor.” In another, Troye Sivan says “I heard she’s a lesbian now and dating some chick called Aubrey. It’s f—ucking sick.”

Cut to a black screen with the Mean Girls font that reads “Ariana Grande in thank u, next.” Grande is shown laying on her bed with a scrapbook including a page for “Pete,” her ex-fiance Pete Davidson. Grande also references her other previous relationships with Big Sean, Ricky Alvarez, and Mac Miller.

The substance of the lyrics is a self-empowering and self-affirming anthem in which Grande sings about how she is grateful for her exe’s because they have helped her to grow and to learn.

While the message of the lyrics is poignant and thoughtful, the music video takes a more light-hearted approach. Grande runs through the various famous scenes of iconic teen-movies like Mean Girls, Legally Blonde, 13 Going On 30, and Bring It On. Some of the highlights include the Christmas-themed talent show dance from Mean Girls featuring Kris Jenner as a proud mother recording the performance on her hand-held camera and the nail parlor scene (featuring the real Jennifer Coolidge) from Legally Blonde. It’s interesting that Grande chooses to fill Rachel McAdams’ role as Regina GeorgeKing, instead of the “protagonist”—Lindsay Lohan’s Cady Heron. In the other movie references, Grande fills in the more expected character roles.

Regardless, “thank u, next” is a very catchy and enjoyable song that is complemented and bolstered by an amazing and well-produced music video. 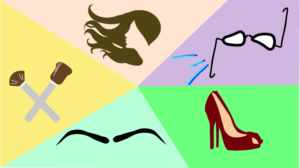