Boston College Director of Athletics Martin Jarmond announced the resignation of women’s soccer head coach Alison Foley on Monday night, marking the end of an incredibly successful 22-year tenure at the helm of the Eagles.

The announcement that Foley was leaving to pursue other opportunities came just over a month after BC fell to Hofstra, 4-1, in the first round of the NCAA Tournament. The Eagles were making their 15th appearance in the annual postseason tourney, having previously strung together an impressive 11-straight trips at one point under Foley.

“It was an honor to coach so many terrific student-athletes during my tenure at Boston College,” Foley said in a statement, per BCEagles.com. “I am proud of what we have accomplished and I look forward to new opportunities in the future.”

In her 22 years on the Heights, Foley compiled a career record of 280-145-39. This past season, despite being picked in the preseason to finish 10th in the conference, Foley coached a team that entered the national rankings and placed fourth. She piled up postseason success throughout her time, making six trips to the Sweet 16, two to the Elite Eight, and even a Final Four appearance back in 2010.

Before the 2018 campaign, Foley’s winning percentage had taken a slight dip. The run of NCAA bids that started in 2003 came to a halt in 2014, a year in which BC finished just two games above .500. The Eagles would miss the postseason in two of the next three years, but this past season was one of their most successful regular seasons in nearly a decade.

“Women’s soccer is a sport where we compete annually for championships, and that is a credit to Alison, her staff and the talented student-athletes to come through the program,” Jarmond told BCEagles.com.

Losing Foley is a setback, especially with the program poised for another big year. The team is welcoming in a pair of U.S. standouts in Michela and Samantha Agresti, twin sisters that, like reigning ACC Player of the Year Sam Coffey, have played key roles as a part of the United States National Team Developmental Program.

For the time being, assistant coach Sammy Boateng will take over in an interim position. And, for the first time since the winter of 1996, BC will be looking for a new women’s soccer head coach. 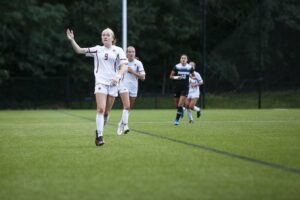