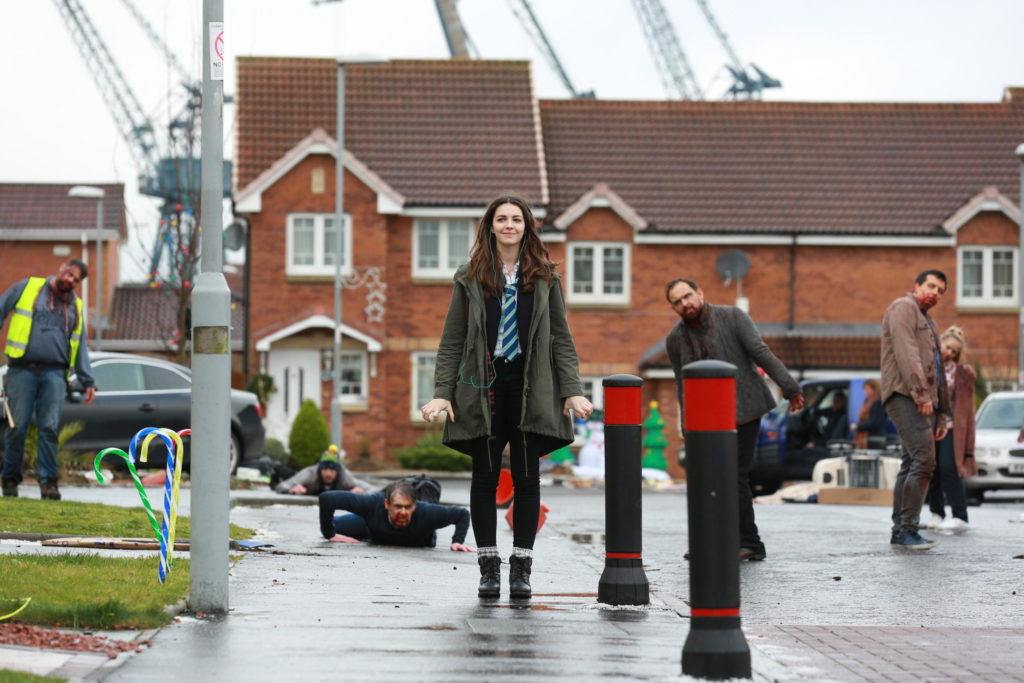 If there has ever been a film with a more over the top and ridiculous premise than Anna and the Apocalypse, one might be hard-pressed in their search to find it. It isn’t very often that a musical about the zombie apocalypse utilizing rolls around. Well, actually this premise of “horror musical” had never been used before in any form of media other than a particularly awesome episode from the sixth season of Buffy the Vampire Slayer called “Once More, With Feeling.” Despite this truly unique plotline, along with a lot of fantastic scenes and ideas, there are quite a lot of negatives that hold Anna and the Apocalypse back from being a classic zombie flick.

This movie follows a Scottish high school senior named, you guessed it, Anna (Ella Hunt), and a crew of her friends and classmates. She is unsatisfied with her life as she goes through the repetitive motions of school and plans on taking a gap year between high school and university to explore the world before reentering the monotonous lifestyle once again. This and a few other introductions serve as the only character development before the singing begins and introduces one of easily the weakest parts of the movie: the songwriting.

Even if the creators were trying to make parodies of the various cliché musical songs that appear in every High School Musical straight-to-DVD remake, they could have at least tried to make the songs themselves interesting or unique. Often times, the scenes centered around the songs are actually quite impressive, but the spectacle is negatively impacted by the clearly dubbed voices and generic, recycled pop instrumentation that makes almost every one of tracks sound the same as the others. It’s extraordinarily irritating when the music in a musical is one of the weakest aspects of the film, especially when the laughter it is meant to elicit from the audience wears out its welcome after the third or fourth song.

But luckily for Anna and the Apocalypse, the things happening on the screen during these songs are so creative that they almost make up for how bad the audio is: The implementation of zombies through an unexplained and unimportant outbreak occurs away from the story so that the characters simply stumble upon the undead naturally. Speaking of stumbling upon the undead, the best scene of the movie comes while introducing the zombies to both the audience and Anna in the most entertaining musical number of the entire film. The implementation of zombie action and gore in the set pieces of the musical numbers helps to offset how unpleasant they all sound.

The gore itself is also one of the more positive aspects of the movie, as the practical effects look great and don’t hold back from being pretty gruesome sometimes. The contrast between the usually very upbeat or lighthearted musical numbers and stomach-turning—for the weak of stomach, at least—violence is what makes Anna and the Apocalypse so interesting as a film. Directly related to the gore are the kills in the movie, which are over the top and almost randomly chosen. The filmmakers aren’t scared to take out characters that the audience is led to like or let characters survive that the audience is expected to hate. The plot is almost impossible to predict, and that makes the progression of the story much more suspenseful and satisfying to watch.

Cinematography, however, comes on a lesser plane as the shot composition is less than impressive and the overly digital look of the individual shots makes the movie look like it was filmed on an iPhone. There are very few interesting camera angles and because of this the visuals are boring whenever there aren’t any people dying on screen. Also weak was the cast of characters, with none of them being very impressive in their performances and quite a few of them being noticeably bad singers, despite having solo songs or significant roles in certain musical numbers.

Is Anna and the Apocalypse worth seeing? Absolutely. Regardless of the many flaws that the film exhibits throughout its 97-minute runtime, the few hilarious musical numbers, zombie scene mashups, and gory kills are more than worth the price of admission. It is far from a perfect musical or a perfect zombie flick, but it has elements of both that qualify it a must-see for zombie fans and strong-stomached musical fans. If anything, fans of two very different genres can finally have a movie to enjoy together.