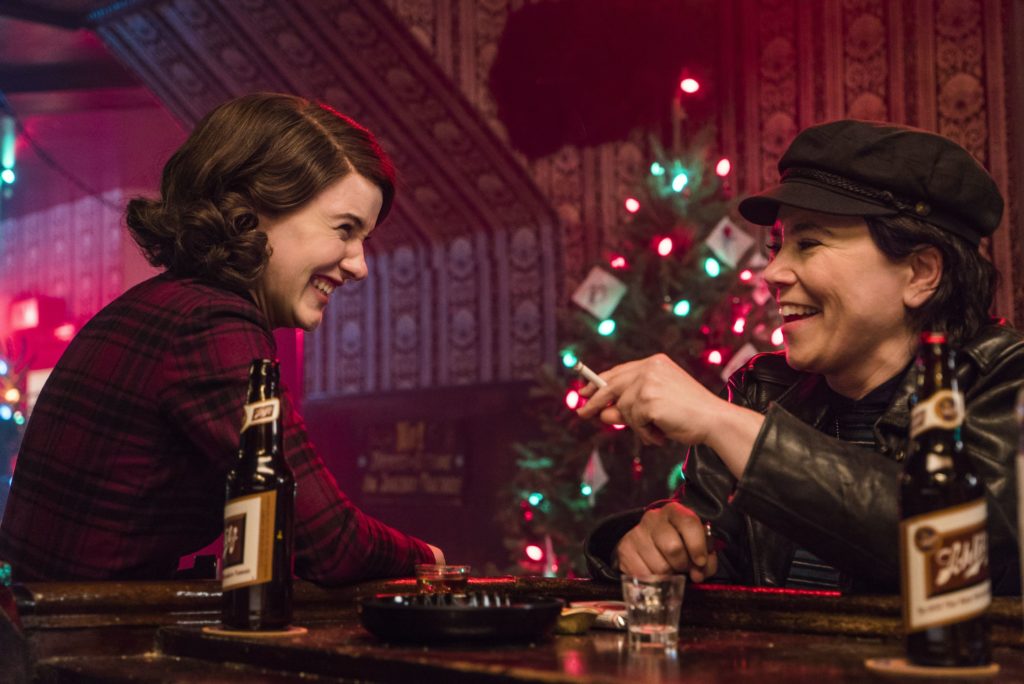 ‘Maisel’ Combats Industry-Wide Sexism After Marvelous Sweep at the Emmys

The first few episodes of The Marvelous Mrs. Maisel’s second season are unexpectedly dominated by Rose (Marin Hinkle) and her questionable (and very sudden) move to Paris. It’s an admittedly abrupt start to a season for a show that had high expectations after sweeping the Emmys earlier this year with eight wins and four additional nominations. While it took a bit to get used to—the series had not ventured out of Manhattan, let alone another country, before—Rose’s spontaneous trip to Paris illustrates a clear parallel between Rose and her daughter that was unprecedented until now. Rose mirrors Midge’s (Rachel Brosnahan) journey of self-reliance, albeit in a way that is somewhat uncomfortable and strange for the viewer.

One of the best parts of Maisel’s first season was its consistency. The cinematography, directing, acting, and plotline were unfaltering in their perfection and a big part of the appeal was that it was so believable. Director Amy Sherman-Palladino created a world that could easily transport viewers to 1950s Greenwich Village because of its simplicity—the show was confined to The Gaslight, The Weissman’s apartment, and the department store where Midge works. Sometimes viewers would catch a glimpse of the factory owned by the Maisels. The show didn’t spread itself too thin, allowing the viewer to feel at home in each of the locations. Each setting was predictable, allowing the true storyline to be experienced via the well-crafted, high-paced dialogue that propels each episode.

So when the Weissmans’ world turned upside down (quite literally—some unique cinematography allowed the Empire State Building to flip upside down and mirror the Eiffel Tower), it diverted the audience’s attention from Midge’s career in comedy and her incessant troubles with Joel (Michael Zegen) to a storyline that nobody asked for. Maybe it could have worked later in the season, but it was off-putting as the first plot twist of the new season.

On the flip side, however, once the show refocuses on Midge’s life, the storyline is better than ever. The second episode of the season might be the first time the audience truly sees Midge stand up for herself—not to her parents, Joel, or Susie (Alex Borstein), but to the men who dominate the comedy industry. And it was absolutely wonderful to see.

In “Mid-way to MidTown,” Midge has had enough of being pushed back to the later hours of the night once everyone has left the comedy clubs. Once she gets onstage, she takes it upon herself to use all the men who went before her as the subjects of her jokes. It’s not without consequence, though—she gets into trouble with the club owner afterward—but it’s still fascinating to see Midge—confident in every other aspect—finally stand up for herself in this way (with absolutely no tact but with charm nonetheless—what else would you expect?).

Even though the season had a rocky start that felt foreign and unlike Season One, it returned home soon enough. By the second episode of the season, Abe (Tony Shalhoub) and Rose have returned to New York and Midge is back to booking gigs. The season could have gotten off to a smoother start had the whole Paris extravaganza been exempt—or better, happened as a backstory in between the first and second seasons. While it made a dent in the show’s often seamless quality, it didn’t detract all that much.

Everything that drew audiences to the show in the first season still has them coming back: Sherman-Palladino’s flawlessly-written and fast-paced dialogue, the perfect dichotomy between Midge and Susie, the comically believable dynamic between Midge and her parents, and the show’s extravagant set and costumes haven’t changed one bit. The way things are looking for Mrs. Maisel, no plotline blip or awkward transition can stop the show from continuing on its increasingly popular climb to the top.