Unlike years past, fans no longer have to wait until early February to learn the next crop of players coming to their schools. On Wednesday morning, Boston College football and teams around the country watched as recruits signed their national letters of intent on the first day of the early signing period. The second year with the accelerated recruiting schedule resulted in the signing of 16 players for Eagles head coach Steve Addazio, a class that warranted a No. 55 ranking in the country, per 247Sports.

With 10 All-ACC players lost to graduation, Addazio had several places to look to the future—and in large part, this class reflects that. BC is losing both its starting safeties and two of its three defensive linemen, so the incoming class of 2023 features a combined seven players at those positions. The group’s top-60 ranking is nearly a 20-point jump from the year prior and the highest on 247Sports since 2014.

“We’re real excited about the class that we’ve signed, and moving forward here in 2019,” head coach Steve Addazio told reporters during Wednesday’s press conference, per BCEagles.com. “I thought we’ve enhanced our team in areas that we needed to enhance our team.”

Out of the 16 incoming recruits, 12 play on the defensive side of the ball. However, the consensus top-two players in the class, per ESPN, play on offense. The duo of quarterback Sam Johnson and running back Patrick Garwo are both four-star recruits, blue-chip players from Michigan and Pennsylvania, respectively.

Johnson, a pocket passer from Walled Lake Western High School in Walled Lake, Mich., stands 6-foot-4 and enters as the No. 25 quarterback in his class. Described by scouting reports as a “strong-armed  athlete with the height and physical tools to develop into an upper-tier QB prospect,” Johnson had offers from schools ranging from Michigan to Syracuse, but it was clear he was locked in to play for the Eagles.

“I love this guy. I think he’s got a tremendous arm,” Addazio said of Johnson, who’s the second highest-rated quarterback to come to BC since 247Sports began ranking players. “He’s got unbelievable character. I mean, he is the kind of guy that you want as a quarterback leading your team with his mindset and his mentality.”

Johnson was active on Twitter in the days coming up to the early signing period, reaffirming his commitment to BC while simultaneously calling out recruits that changed their minds late in the process.

Please stop flipping your commitment based on logos and last minute prepared speeches, it's about the relationships you built over time when nobody was checking on you IJS ????????‍♂️

The choice of tweets likely came as a response to a trio of talented players decommitting from his future school. The Eagles lost four-star inside linebacker Tommy Eichenberg in mid-November to Ohio State, then watched as two more departed in the run-up to the signing day. Three-star linebacker Marvin Ham opted for Colorado, while three-star offensive guard Maurice Smith made the painful switch to conference opponent Florida State.

Garwo, meanwhile, continues the line of strong running back prospects coming through the Heights—Addazio opted for the term “bona fide player” to describe him. The 5-foot-10, 200-pound back from Fairless Hills, Pa., is a hard-nosed ball carrier with breakaway speed, a familiar scouting report for those who spent the last two years watching A.J. Dillon and David Bailey. Garwo had plenty of offers as well, but committed to BC in June over the likes of Wisconsin, Rutgers, and Temple.

In the trenches, Addazio pulled in four defensive lineman to bring depth to a position that is losing stars Zach Allen and Wyatt Ray. The group includes a pair of players from Ohio, with special teams coordinator Ricky Brown doing the brunt of the recruiting work on that front. Brown pulled in the three-star defensive end duo of Spencer Bono (Cincinnati, Ohio) and Jackson Ness (Columbus, Ohio). The other guy to keep an eye on at the position comes from Mater Dei High School in New Jersey—Izaiah Henderson. The last two, Ness and Henderson, were both described by Addazio as “looking the part” of college football players despite not being out of high school yet. Defensive tackle Ireland Burke also arrives from New Jersey as one of the state’s top recruits at the position.

Backing them up in the secondary is a quartet of defensive backs, two from New Jersey—a state Addazio and his coaching staff concentrates on heavily. The top incoming defensive back is Josh DeBerry, a top-30 Michigan recruit who played high school ball at De La Salle and won back-to-back state championships. Alongside him is New Jersey’s top safety Connor Grieco, a quarterback project in Steve Lubischer, and one of Maryland’s top defensive players in Jalen Williams.

As far as other defensive positions are concerned, Addazio pulled in several players that will likely have a big impact in the years to come. A teammate of Henderson at Mater Dei, outside linebacker Shitta Sillah picked the Eagles over Michigan State and Purdue. Standing 6-foot-5, Sillah was a matchup nightmare in high school to the tune of 52 tackles, 10 sacks and a fumble recovery as a senior.

“He’s really, I think, going to be just a sensational player here,” Addazio said. “[I] really think his ceiling, again, is so, so high.”

On offense, BC pulled in two more offensive lineman and a pair of wideouts. Wide receiver Bryce Sebastian, the younger brother of current Eagles cornerback Brandon, hails from West Haven, Conn. and was rated the No. 1 athlete in the state. He’s joined by Ethon Williams, Maryland’s all-time leader in touchdown receptions, as the duo will attempt to crack a wide receiver depth chart that’s seeing the loss of two regular contributors in Jeff Smith in Michael Walker.

The Eagles live and die by their offensive line, and Jack Conley and Blerim Rustemi—from Connecticut and New Jersey, respectively—will be attempting to carry on the strong tradition. Conley stands 6-foot-8 and played high school ball at New Canaan, the same school as Allen. Rustemi, meanwhile, was one of the best offensive guards in his state and joins current linebacker Vinny DePalma as alums of DePaul Catholic.

Overall, the group is one of the highest-rated classes in Addazio’s tenure, even with the loss of three talented recruits. While a three-game slide at the end of the season likely played a role in the trio of decommitments, the fact remains that the Eagles were still able to pull in more talent than years past. Johnson is one of the best quarterback recruits to sign with BC, and the reinforcements on defense are crucial. Question marks remain, of course—Addazio notably didn’t reel in a kicker, even though the position is very weak, with Colton Lichtenberg graduating this May. Still, there’s time to fill out the class, and a win over Boise State in the SERVPRO First Responder Bowl on Dec. 26 could help make the case for any of the remaining undecided high schoolers. 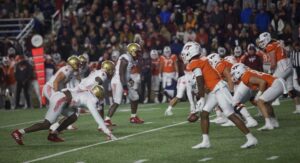 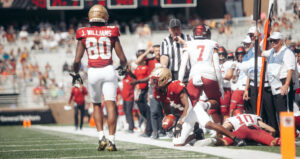