Upon graduating, Boston College women’s hockey defenseman Grace Bizal will have a landing place quite familiar to her. The 5-foot-5 Minnetonka, Minn. native was selected 19th overall by the Minnesota Whitecaps in the fourth round of the NWHL Draft, setting up a return to her home state while additionally joining three of her classmates in seeing their names on the draft board.

As the fourth Eagles player to be selected, Bizal ensured that BC would have the most representation of any program in this year’s draft. The four draft picks were one more than the likes of Wisconsin, Merrimack, and Colgate. The Eagles placed three in the first two rounds, then Bizal followed on the second day of the league’s five-team draft.

“Grace is a smooth skating defender that can chase anyone down,” Whitecaps head coach Ronda Engelhardt said in a quote posted on the team’s Twitter. “She plays good angles defensively, and is a very hard worker.”

Engelhardt was likely very familiar with Bizal, as she played her club hockey with the Minneapolis-based Jr. Whitecaps. There, the former finalist for the Minnesota “Ms. Hockey” award helped the team win the 2014 US Canada Detroit Series. Her success continued once she arrived at BC, having played in 123 games thus far, registering 52 points while also playing a pivotal role on defense.

This season, Bizal has seen her scoring take a step forward, currently slotting in at 12th amongst defenseman in points. The senior has 12 points with two goals and 10 assists—and the points often come at crucial moments. Of BC’s 13 game-winning goals, Bizal has contributed to five of them.

She’ll have an immediate mentor in Minnesota, with former Eagle and Maplewood, Minn., product Allie Thunstrom on the roster. Thunstrom, who graduated back in 2010, bounced around but signed with the Whitecaps this past August for her first NWHL contract. While at BC, Thunstrom wrote her way into the record books, scoring 86 goals (fifth) and totaling 139 points (sixth).

Her selection, which secured that the Eagles would be the most represented program in college hockey, was fitting. After all, BC’s senior class is one of the most decorated ones in school history. It’s not often you see a group that finds several players all over the record books in points, goals, assists, and per game averages. Throw in a few gold medals and the four draft selections make perfect sense. With 12 former Eagles already playing in the NWHL and four more potentially on the way, there are more reasons with each passing year to tune in to the fledgling women’s hockey league in the midst of its fourth season. 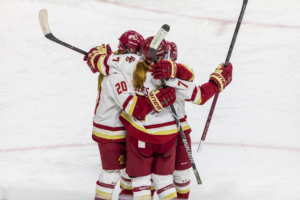 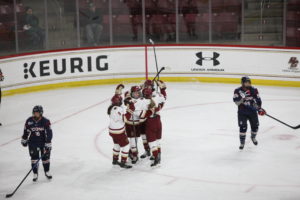