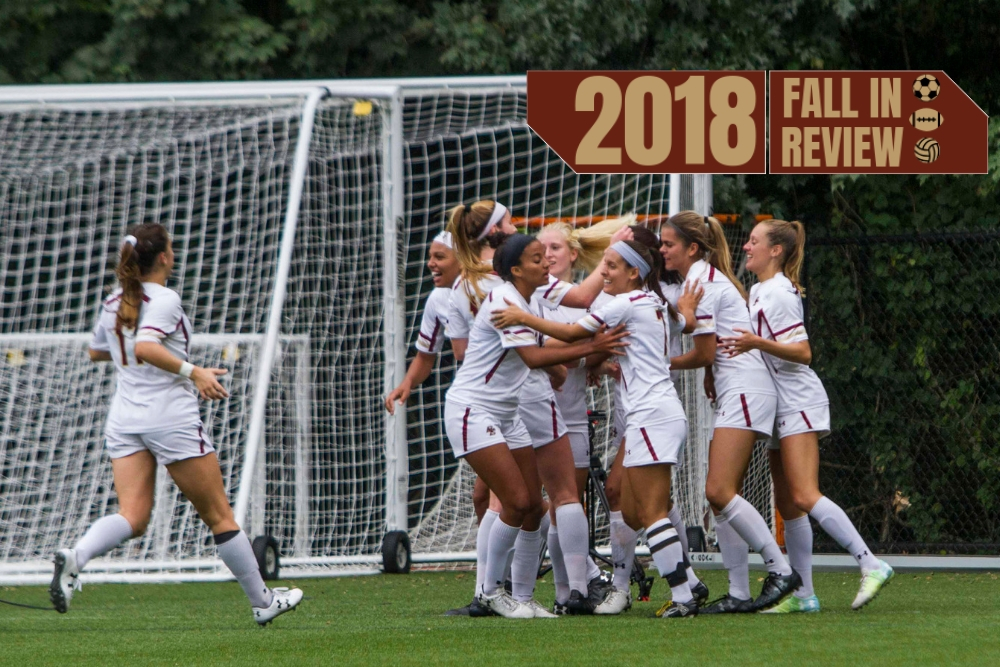 When Boston College women’s soccer head coach Alison Foley talked about her team in the preseason, she spoke quite optimistically. Despite losing two of her starting defenders, Foley was confident that a strong recruiting class and the return of two key players from seasons lost to injury would be enough to see her team return to the NCAA Tournament. Paired with a star midfielder in Sam Coffey and plenty of experience scattered throughout the roster, a strong finish in the conference was expected.

What wasn’t expected, though, was 10 consecutive wins to start the season and the eventual No. 4 overall seed in the ACC Tournament. While the Eagles—originally slotted at 10th in the conference—would lose their last two games, falling to Clemson in the conference tournament quarterfinals and Hofstra in the NCAA Tournament, BC (14-5-1, 6-3-1 Atlantic Coast) still enjoyed a breakout season in what was ultimately both Foley and Coffey’s last years with the program.

What a #GWG from #BCWSoccer junior Jenna Bike in today’s win over No. 7 #FSU – #WeAreBC ???? pic.twitter.com/GhgKjYsIZ2

While this season was full with exciting moments for the BC, few could top Bike’s goal that vaulted the Eagles to a 2-1 win over then-No. 7 Florida State. BC had entered the game with a perfect record through nine games but many likely expected that to change when the Seminoles arrived in Newton, Mass. After all, FSU was a powerhouse and eventually went on to win the 2018 NCAA Championship.

On Sept. 23, however, it was Bike’s Eagles that got the better of the Seminoles. BC jumped out to a 1-0 lead on a Gaby Carreiro penalty kick, but it was answered in the 73rd minute when FSU’s Deyna Castellanos converted one of her own. The deadlock didn’t last long, though.

Just a minute later, Eagles midfielder Emily Langenderfer threaded a beautiful over-the-top pass to Bike, who used her speed to slip past the Seminoles’ back line. She deftly placed her shot over the keeper and into the top right corner to give BC a lead it would not relinquish. It was a monumental win for the Eagles, who quickly climbed into the national polls and won three of their next four games.

Worst Moment: Loss to Hofstra in the first round of the NCAA Tournament

Although bowing out to Clemson in the first round of the conference tournament was a hard defeat to swallow for BC fans, the setback against Hofstra just over a week later was even more brutal. The Eagles had started to regain momentum after falling to the Tigers in a game that featured plenty of questionable calls and missed chances. BC hosted a selection show party where the Eagles were announced as one of the top-16 national seeds, an exciting selection that brought with it a first-round home game and the potential for a deep tournament run.

Instead, BC played one of its worst matches of the year, losing to Hofstra in a painful 4-1 blowout. The Eagles’ stout defense, which had been nothing but reliable over the last three or so months, broke down multiple times against a Pride attack that capitalized on open space with quick and decisive forwards. Hofstra needed just four shots—all of which went in—and used a “bend but don’t break” philosophy on defense to contain BC. Sabrina Bryan scored twice and Lucy Porter had a goal and an assist for the Pride, who built a 2-0 lead then withstood a Olivia Vaughn goal before scoring twice more in the final 20 minutes.

“Our back line has done great all year,” Foley said after the loss. “If somebody said, ‘Do you think anybody in the country is going to score four goals on you?’ I would’ve said no. It’s a tough one.”

The choice couldn’t be more obvious, even though the sophomore midfielder from Sleepy Hollow, N.Y., would announce that she was going to transfer to Penn State just a few months after the season ended. While various players on the back line and scattered throughout the lineup enjoyed excellent seasons, Coffey was in a class of her own—she was the only BC player to register 30 points, let alone 20. She was the ACC Midfielder of the Year and an All-ACC First Team selection, piling up 12 goals and 14 assists for a conference-best 38 points.

Coffey was able to do everything for Foley’s side. She was the facilitator in the middle of the field, setting up teammates for runs along the wings, and was also always willing to get a shot off with her powerful right foot from distance. The midfielder assumed corner kick and free kick duties for the Eagles and she boasted an impressive connection with teammate Gianna Mitchell on the former, resulting in quite a few goals. She was a member of the All-ACC Freshman Team last season, and took another huge leap in her second year, recording her first career hat trick against Virginia Tech before adding an impressive six-point performance in the regular season finale versus Pittsburgh. Her 38-point campaign is the fourth-highest single season mark in program history, and her departure will surely hurt the Eagles over the next two years.

It’s a fact of life that in most college sports, freshmen rarely get the opportunity to play meaningful roles right off the bat—unless they’re incredibly talented. The inexperience and high-pressure situations can often result in breakdowns during pivotal moments. Try telling that to Duran, who entered as the reigning Massachusetts Gatorade Player of the Year and went on to enjoy a impressive debut season for the Eagles.

Duran started all 20 games for BC and finished second only to fellow defender Gianna Mitchell in minutes played with 1,782. Alongside Mitchell, she anchored a back line that was one of the best in the country through the first two months or so before finishing 41st in goals against average. She even had a game-winning goal, striking first in the Eagles’ first ACC matchup against Syracuse that ended with a lopsided 3-0 score.

This honor was seen coming by Foley, though. She played Duran all 90 minutes in a preseason scrimmage against Penn State and remarked after the matchup that she had plenty of confidence in the freshman.

“For her to be able to play 90 minutes and make that type of an impact against the sixth team in the country was impressive,” Foley said after the scrimmage. “I think she’s going to have a great freshman campaign and certainly be a great addition.”

Achilles’ Heel: Scoring down the stretch

Yes, the Eagles would finish the 2018 season with the No. 20 scoring offense in the country. Yet, outside of a seven-goal output against a terrible Pittsburgh team, BC struggled down the stretch against good teams. The Eagles seemingly used up all their goals in the early going, as outside of the rout of the Panthers, they scored just three goals in their last five games. This included a shutout loss to Clemson and the one-goal performance against Hofstra in the tournament—two postseason games that carried tremendous weight but featured the inability to convert chances.

In those two games, BC outshot its opponents by a combined margin of 47-12, yet found itself on the wrong side of a composite 6-1 scoreline. The Eagles were getting plenty of chances, but they were misfiring or just peppering shots in lieu of a more sustained attack. Foley was clearly frustrated after both losses.

“I thought we had plenty of other opportunities to score,” she said after the Clemson defeat. “[We] were pushing and had them on their heels.”

The same sentiment emerged after the tournament loss, where she kept it simple and said, “We didn’t take care of our opportunities. You can’t outshoot someone, 28-6, and score one goal. We certainly had enough chances to make the score line look differently but we didn’t.”

Both of these quotes speak to the disappointment BC faced in the final two games, but also to the ultimate Achilles’ heel—no matter the talent up top, the Eagles weren’t able to find their scoring touch in the homestretch (they also lost to Duke, 2-1, and to North Carolina, 1-0) and it cost them a chance at any serious postseason run.

This is an exceptionally difficult question to answer for a program that just saw its two most well-known members depart. With Foley resigning to pursue other opportunities and Coffey headed to Penn State, the Eagles will have quite a different look next season. The graduating seniors include the duo of goaltender Alexis Bryant and defender Elysa Virella, who combined for 34 starts. Other players leaving include the first forward off the bench in Carly Leipzig and graduate transfer defender Rachel Newborough.

The returners greatly outnumber the departures, though. The bulk of the defense is coming back, and, outside of Coffey, the midfield is intact. The dangerous attacking trio of Vaughn, Bike, and Carreiro will all return for their senior seasons. The incoming recruits include the very talented pair of Samantha and Michela Agresti, twin sisters involved with the U.S. National Team Developmental Program. Overcoming the loss of a key cog like Coffey will be difficult, but the fact that there’s a talented goalie waiting in the wings in Maddie Murphy to replace Bryant makes things less difficult.

Sammy Boateng is the interim head coach, for now. Director of Athletics Martin Jarmond has made one thing clear in his tenure thus far—he knows what he’s doing in hiring coaches. The program could use a boost to make up for the loss of the all-time winningest coach in school history, and Jarmond has already shown great hiring skills with the addition of women’s basketball’s Joanna Bernabei-McNamee and volleyball’s Jason Kennedy. Either way, next season will feature some necessary adjustments without Coffey as the main target on offense, but the depth is still going to be there to make a similar run in conference play.