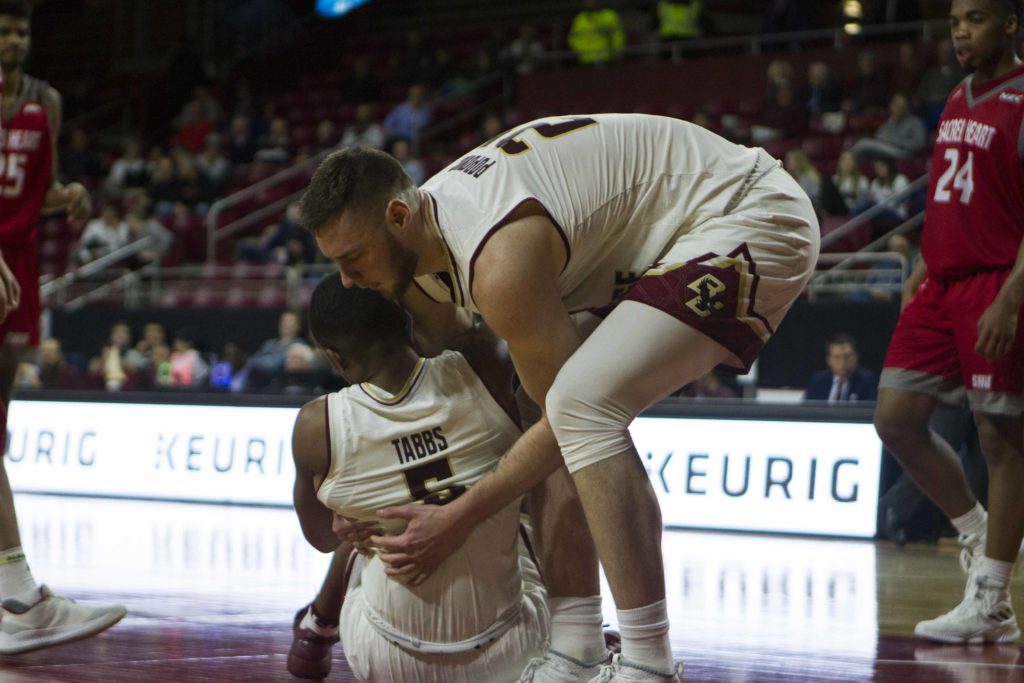 In its first true road game of the season, and still without Jordan Chatman (ankle), Boston College men’s basketball found a way to win against a surging DePaul team. Trailing for 38-plus minutes of this contest, BC (9-2) continually clawed its way back into the contest, and eventually overtook the Blue Demons (8-3) to secure the victory, 65-62. Nik Popovic led the way for the Eagles, scoring 19 points, while Wynston Tabbs scored 10 of his 15 in the final three minutes as BC rose up to finish strong.

With this being the Eagles’ penultimate non-conference game, a road win against a strong Big East team both looks good for their resume and will give this team confidence going into the ACC gauntlet that lies ahead. With the BC win streak now sitting at three, here are 10 takeaways from the DePaul victory.

1) Swarm: The Eagles’ defense was fantastic on Saturday, especially on the interior. DePaul boasted a significant height advantage, and while BC was outrebounded, it still held the Blue Demons to just a 37 percent shooting clip. Almost every layup was contested, and the Eagles physicality underneath the basket made up for its size disadvantage. The tenacious interior defense was epitomized when Tabbs sprinted down the court and chase-down blocked a Lyrik Shreiner layup, sending the ball deep into the seats.

2) Road: The Eagles struggled mightily in their away games a season ago, posting a 2-11 record in true road games. After the cancellation of their matchup against Texas A&M in College Station, this was BC’s first road test of the season. While the travel may have played a factor in the Eagles physically—many BC players, especially Bowman, were missing their jump shots short, which usually is a result of tired legs—they were mentally ready to play in a hostile environment. They handled the Chicago crowd, a group that was raucously cheering for its Blue Demons down the stretch, and getting a road win now bodes well for the nine conference road games on tap.

3) Consistent: While Bowman and Tabbs have been volatile at times at the guard position, Popovic has been a model of consistency down low. With the two guards struggling to find their shots for much of the game, the junior kept plugging along. He has expanded his post game and even took defenders off the dribble, en route to leading the Eagles in scoring. Popovic’s production can be relied upon, as he has notched at least ten points in all but one game he’s played in this season, and is shooting 57 percent from the field.

4) Deep: Without Chatman in the lineup, BC had trouble getting its 3-pointers to fall. With six minutes to play, the Eagles were just 1-of-15 from beyond the arc. Their mid-range game was off as well, which made BC rely heavily on Popovic and interior scoring. However, in crunch time facing a deficit, and when they needed it most, Bowman came through with his first deep make in five attempts, followed by another by Chris Herren Jr., playing in his first game since receiving an athletic scholarship from the University.

5) Debut: Jared Hamilton, brother of freshman Jairus, became eligible to play on Saturday after having to sit the first 10 games, due to his mid-season transfer from Georgia Southern a year ago. The lefty saw 14 minutes of action, and notched four points in his first contest as an Eagle. He is shaping up to be another valuable bench guard at Jim Christian’s disposal.

6) Youth: For the second-consecutive contest, three freshmen were in Christian’s starting five, all of whom were playing in their first road game. While Hamilton, Tabbs, and Herren Jr. combined to shoot just 11-of-31, each of them handled the pressure of playing in a tight matchup away from Conte Forum. Tabbs was dominant down the stretch, with Herren Jr. hitting big shots and Hamilton playing excellent defense down low.

7) Selection: For much of this game, Bowman was trying to force his shot and will it into the basket. The outstanding guard was trying so hard to push the ball in transition and get his team back in the game, that he would often turn the ball over on his drive, or force up deep contested shots that had little chance of falling. The fine line of knowing when Bowman and his immense talent should take over the game versus playing within himself and distributing the ball to create better shots is a facet of his game that can be improved upon.

8) Hack-a-thon: Whereas the loss against Providence quickly transitioned from a basketball game into a free-throw shooting contest, the referees in this game fell at the exact opposite end of the spectrum. With both teams struggling on the perimeter, this contest was dominated in the paint. A series of hard drives with considerable contact went uncalled. Before both teams entered the bonus with seven minutes to play, just 11 total free throws had been shot, in contrast to the Eagles’ usual slashing style that gets them to the line 29 times per game.

9) Switch: After calling a timeout and down by nine points with under six minutes to go, the Eagles, and specifically Bowman and Tabbs, flipped a switch. After trailing for the entire game, the guards came alive. Bowman nailed a 3-pointer and then drove to the hole with confidence, followed by Tabbs notching 10 points in a row for the Eagles. The hands-on defense continued to be active, creating traps and steals that led to quick points at the other end.

10) Tactics: With a three-point lead and 10 seconds to play against Providence, Jim Christian elected to play defense, and was eventually burned when a made 3-pointer sent the game into overtime—one which BC eventually lost. On Saturday, in the same situation, Christian opted to foul and put DePaul at the line. He relied on his team’s free throw shooting, and the strategy worked. After both sides hit two free throws, the Blue Demons were left with just three seconds to fire up a halfcourt shot. The prayer was off the mark, and the Eagles escaped victorious.