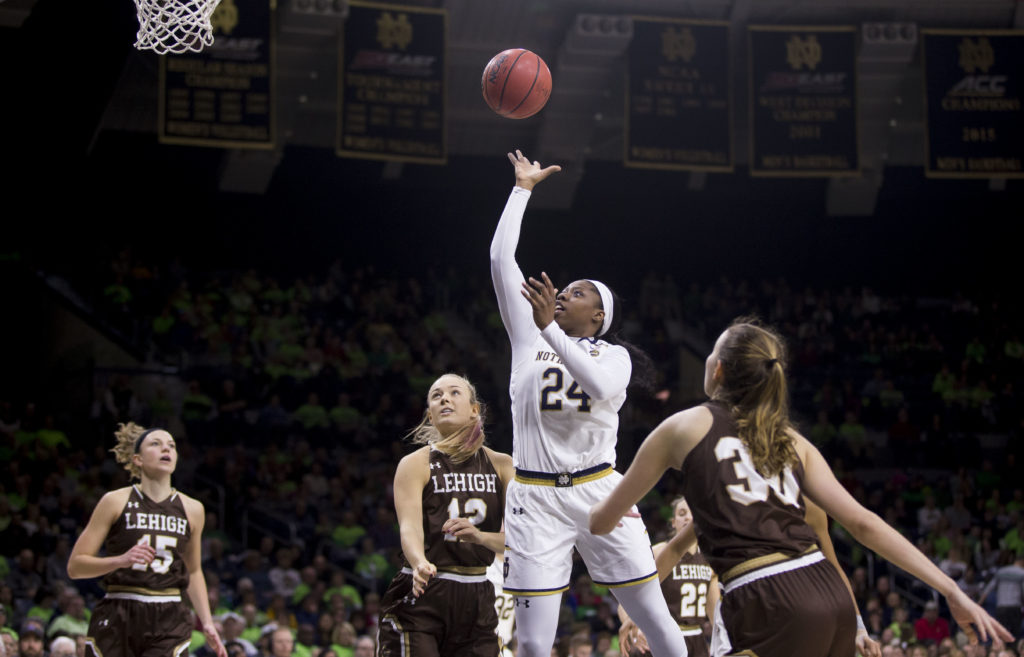 On Thursday night, 14 of the Atlantic Coast’s 15 programs will square off at the start of conference play. ACC women’s basketball—home to the reigning national champions and four AP top-25 teams—currently features three undefeated teams and nine with at least double-digit wins. The non-conference slate was largely a breeze for the bulk of the conference, with just one team failing to finish at least four games above .500.

With the ACC’s 120-game slate looming, there’s plenty to catch up on after two months of action. Here’s a few things you need to know about each team in the conference—ordered by the preseason coaches poll—heading into the seven-game slate tonight.

1) No. 2 Notre Dame (12-1): The Irish nearly escaped a challenging non-conference slate with a perfect record, the lone blemish being an 18-point setback at the hands of perennial heavyweight Connecticut. The No. 2 team in the country, the Irish have won five straight since on the strength of the ACC’s best offense (89.2 points per game). Arike Ogunbowale leads the conference in scoring (23.1 ppg) and teammate Jessica Shepard is a consistent double-double threat.

2) No. 3 Louisville (12-0): Right behind Notre Dame in the national polls, the defending ACC Tournament champion Cardinals are enjoying a spotless start to the season. Behind Asia Durr (22.5 ppg), Louisville beat three top-50 RPI teams. While rebounding has been a weakness, the Cardinals limit turnovers and make smart passes, resulting in the sixth-best offensive rating in the country, per herhoopstats.com.

3) No. 14 Syracuse (11-2): The Orange have climbed to 14th in the national polls after an impressive non-conference slate—it only lost to No. 12 Minnesota and No. 5 Oregon. Tiana Mangakahia is averaging 15.8 points and 7.8 assists per game, the latter of which leads the conference. Turnovers have plagued Syracuse in the early going, but it’s been able to make up for it on the defensive end with a unit that boasts the seventh-best defensive rating in the nation.

4) No. 9 North Carolina State (13-0): Currently ranked No. 9 in the AP Top 25, the Wolfpack is on the verge of tying the best start to a season in program history. One of just seven unbeaten teams left, N.C. State has a chance to make serious noise in conference play. The Wolfpack is 14th in offensive rating and 22nd in defensive rating, a level group that lacks one true star. Aislinn Konig is the conference’s best 3-point shooter (44.3 percent) and is seventh in assists (4.3), Kiara Leslie is eighth in rebounds (8.6), and Grace Hunter is 14th in scoring (14.6 points).

5) Miami (12-3): A preseason top-25 team, the Hurricanes have since dropped out after a 10-point loss to Central Michigan. That game was a microcosm of what could hamper Miami this season—defense, as the Chippewas dropped 90 points on them. The Hurricanes can score—that much is made evident by a top-15 offense and nearly 40 percent 3-point shooting—but they rank outside the top-50 in defensive rating and are 10th in the conference in scoring defense (62.0 points allowed per game).

6) Duke (8-4): With the current way the Blue Devils are playing, a 4-12 conference record could very well be in the cards. Duke didn’t play a top-50 team by RPI in non-conference play but still came away with four losses, including one in the third category—teams outside the top 100. Haley Gorecki is averaging nearly 17 points per game, but she’s without a lot of help as the Blue Devils are 12th in the ACC in scoring.

7) North Carolina (9-5): The team was projected to take a step forward from last year’s mediocre bunch, but that could be a taller task than previously expected. The Tar Heels seemed headed for a similar 15-15 record, as they don’t really excel in any one category. Janelle Bailey is averaging 17.3 points and 9.4 rebounds per game, Stephanie Watts is a sharpshooting guard (40 percent from beyond the arc), and Shayla Bennett is an excellent facilitator (5.1 assists), but UNC is dead last in the conference in defense and a middle of the pack offense likely won’t be enough to overcome those shortcomings.

8) Florida State (12-1): If not for a 13-point loss to LSU at home in November, the Seminoles would be in the AP Top 25 and not just lingering in the receiving votes section. A pleasant surprise after being picked eighth in the ACC, FSU leans on an elite defense—it’s 17th in defensive rating—and a two-headed offensive attack. Kiah Gillespie and Nicki Ekhomu average 18.1 and 14.6 points per game, respectively, guiding the Seminoles to a plus-16.8 scoring margin.

9) Georgia Tech (10-3): A low-scoring game will play into the Yellow Jackets’ favor—they pile up steals and blocks with a strong defensive mindset, but things will get tricky for them in shootouts. GT doesn’t have a lot of scoring depth, though, as Elizabeth Balogun and Francesca Pan both average around 14 points per game but nobody else cracks double-digits.

10) Virginia Tech (13-0): The Hokies played a very weak non-conference schedule—nine teams fell out of the top 100 by RPI—but they’re still undefeated through 13 games and that’s no small feat. VTech has top-40 marks in both offensive and defensive rating and it’s doing a lot of things well. Regan Magarity is the conference’s best rebounder, pulling in 14 a game, and Taylor Emery is third in scoring at 18.1 points per game.

11) Virginia (6-7): A pretty tough schedule early on went about as well as expected for the Cavaliers—they enter conference play as the only team with a sub-.500 record. It’s a fresh start once the ACC begins, and it’ll be important for UVA to learn from the early lessons. It had two bad losses to Alabama and Radford in its last four games, but enters on a two-game winning streak. The Cavaliers don’t have a go-to scorer, struggle to force turnovers while committing too many themselves, and could be in for a tough 16-game run.

12) Wake Forest (9-4): Elisa Penna does it all for the Demon Deacons. She’s nearly averaging 16 points, six rebounds, two steals, and two assists per game—a well-rounded stat line. She’s helped guide a turnaround after an ugly four-game losing streak earlier in the season that featured three losses to teams outside the top 100 in RPI. Penna is one of four double-digit scorers for Wake Forest who’ve rattled off six wins in its last six games, albeit against lesser foes.

13) Pittsburgh (9-5): The Panthers have had the unfortunate tendency to play to their opponents’ ability, which has led to wins over Arkansas and Northwestern while simultaneously falling to the likes of Youngstown State and Georgetown. Pittsburgh stays in games by playing well at the perimeter on both sides—it shoots 35.6 percent from beyond the arc (55th) while holding opponents to a 27.0 percent mark (27th). The concern for the Panthers is that their highest scorer, Cassidy Walsh, places 43rd in the conference at 10.9 points per game.

14) Clemson (9-4): All things considered, the Tigers had a decent start to the year. Two of their four losses came to top-25 teams in Tennessee and South Carolina and they strung together a five-game winning streak at one point. Conference play could get pretty rocky with the concentration of talent up top, but the Tigers have a top-60 defensive rating and currently force 21 turnovers per game, the 25th-most in Division I. Kobi Thornton is averaging 16.7 points and 8.1 rebounds per game, one of three Clemson players who average double-digits, and first-year head coach Amanda Butler is hoping that’ll be enough to eke out some wins.

15) Boston College (11-2): Chances are, with new head coach Joanna Bernabei-McNamee infusing the program with newfound energy, you’re not going to see the Eagles in last place when conference play wraps up. Yes, BC has largely coasted through a non-conference slate that ranks 182nd by strength of schedule, but it did come within a late breakdown of knocking off No. 12 Minnesota. The Eagles are one of the best rebounding teams in the country right now and have seen an impressive jump in scoring from a season ago—they’re now third in points per game (80.6).