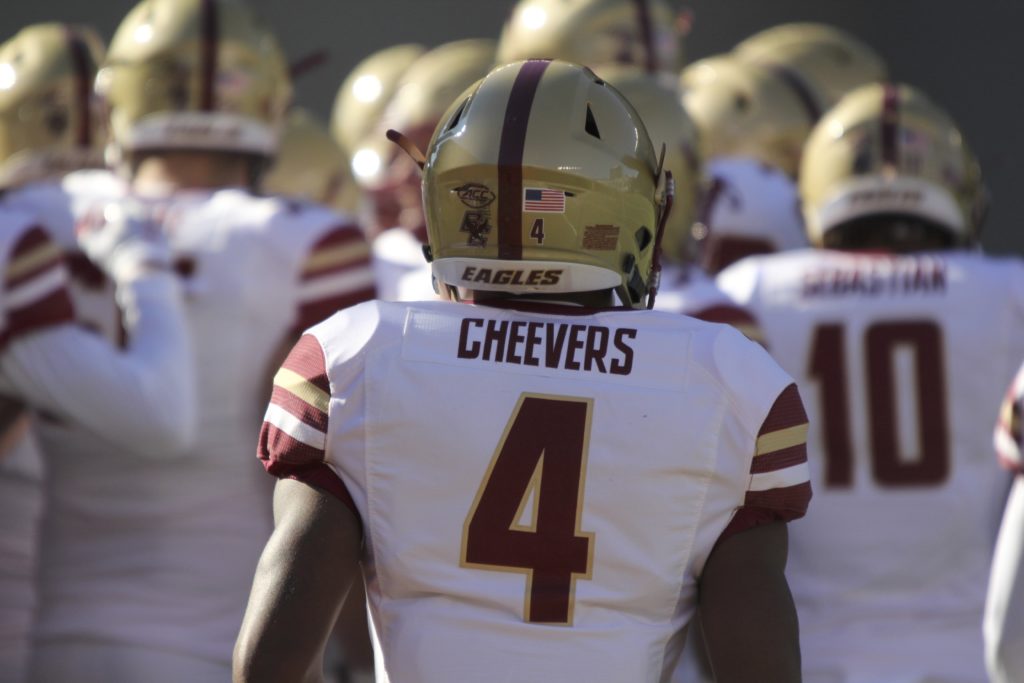 For the second-straight season, a Boston College football defensive back picked off seven passes during his first year as a starter and, at one point, led the nation in interceptions, en route to earning Walter Camp All-American honors. Only this time, Hamp Cheevers—unlike safety Lukas Denis—elected to ride the spotlight to the pros, rather than return to Chestnut Hill for his final year on the Heights.

On Saturday night, Cheevers announced via Twitter that he has officially decided to forgo his senior season and declare for the 2019 NFL Draft.

The junior cornerback rounded out the year tied with Syracuse’s Andre Cisco for the most interceptions in the country. Cheevers—who nabbed a pair of passes as a backup in 2017, eventually filling in for an injured Kamrin Moore the final three games of the season—has a knack for jumping routes. On several occasions, the shifty 5-foot-10 defensive back read quarterbacks’ eyes and baited them into throwing his way—once the ball was out, there’s a good chance he was making a break for the interception.

Similar to Denis, Cheevers was a menace whenever he got the ball in his hands, effectively turning into an offensive weapon after recording a pick or scooping up a blocked kick. When all was said and done, the Trenton, Fla. native returned four of his nine career interceptions 23 or more yards, reaching or eclipsing that mark three separate occasions this fall. Perhaps his most memorable takeaway was the only one that ended in six.

With less than a minute remaining in the opening half of the Eagles’ first meeting with Holy Cross since 1986, Cheevers tracked Crusaders quarterback Emmett Clifford as the FCS gunslinger scrambled outside the pocket, stared down wide receiver Blaise Bell, and hurled a pass toward the sideline. Cheevers made Clifford pay, intercepting the pass and coasting downfield for an 81-yard pick-six.

In order to lead the country in interceptions, a player has to have a nose for the ball, and Cheevers undoubtedly fits the build. The junior never went more than a game without intercepting a pass this season and, on occasion, seemed like a takeaway magnet. For instance, during BC’s fifth-annual Red Bandanna Game against Miami, Cheevers navigated a game of hot potato with teammate Wyatt Ray and Hurricanes offensive lineman and wide receiver D.J. Scaife Jr. and Mike Harley before coming down with his fifth pick of the year.

But Cheevers’ play is defined by more than just the interception total next to his name. In 2018, he was not only a ballhawk, but also a shutdown corner. All year, he allowed just 35 receptions on 74 targets for 433 yards, according to Pro Football Focus. When quarterbacks threw his way, the junior conceded a meager 40.0 passer rating, the second-lowest among ACC cornerbacks during the regular season. Playing in 92 percent of BC’s defensive snaps, Cheevers—at least to some degree—created an island on his side of the field.

The junior was one of the Eagles’ program-best 13 All-ACC selections. With his departure, BC will be losing 11 of those 13 to graduation and/or the NFL. Cheevers will likely join Denis and strong safety Will Harris as the next three BC defensive backs to hear their name called in the NFL Draft. Over the course of the past three years, the position group has yielded four draft selections—Justin Simmons (Denver Broncos), John Johnson III (Los Angeles Rams), Isaac Yiadom (Denver Broncos), and Moore (New Orleans Saints/New York Giants)—bolstering the program’s reputation as something of a “DBU.”

Three years ago, Cheevers was just a 155-pound two-star recruit from Florida. Now, after two years of development and a highlight reel of a junior season, he’s a matter of months away from making it big.