Home » Eagles Rally Past No. 7 Providence in Return to Hockey East Play 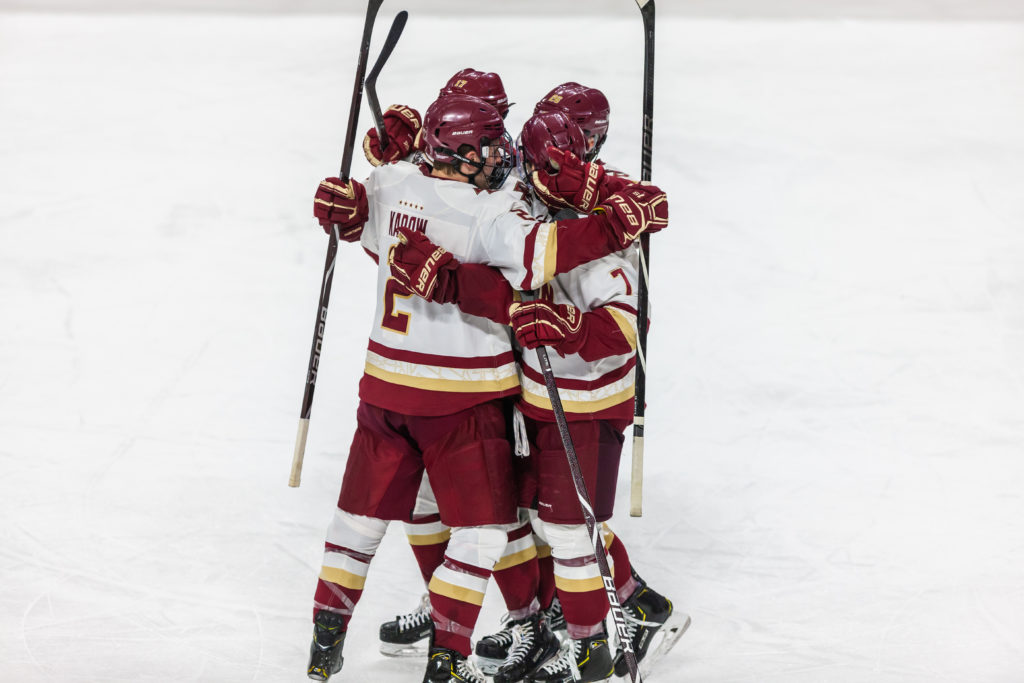 Eagles Rally Past No. 7 Providence in Return to Hockey East Play

After three disappointing road losses in a row to start the new semester, Boston College men’s hockey was able to pick up a much-needed win on Friday night over No. 7 Providence, 4-2. In a back-and-forth affair, the Eagles (7-9-2, 7-1-2 Hockey East) were able to grind out what could turn out to be their best win of the season and mark a potential turning point. Joseph Woll piled up 28 saves and impressed against the Friars (12-5-4, 6-3-1), backing up physical play and a well-executed offensive set by BC.

The Eagles got off to a hot start, needing just 12 seconds to get on the board. Logan Hutsko made a swift pass to David Cotton who slipped past a defender and finished a deflected backhand shot past Providence goaltender Hayden Hawkey. It was the Friars, though, who would absorb the opening salvo and respond in kind, dominating the remaining balance of the first period.

After some physical play, Providence set itself up for two goals that BC’s Woll could do little about. First, Friars forward Jack Dugan hit Josh Wilkins down low for an easy backdoor finish on Woll in what was a well-executed 3-on-2 breakout.

Then, with just two minutes left in the opening period, a costly turnover by the Eagles at the blue line gave Providence a 2-on-1 chance. Friars freshman Jay O’Brien was off to the races, eventually scoring with a beautiful finish—he sold Woll hard on the forehand and fired one top shelf, backhand. This gave the Friars a 2-1 lead, their first of the game. Early on, Providence looked like a top-10 team, outnumbering the Eagles in scoring chances while capitalizing on the odd-man rushes.

About three minutes into the second period, though, BC found an equalizer. Cotton bolted up the ice with the puck on a 3-on-2 rush, eventually passing it to Michael Kim who scored his first goal of the season on a one-timer. The Eagles committed four out of the six penalties handed out the rest of the second period, but they still managed to hold the Friars off the scoreboard with a strong penalty kill.

BC opened up the next period with a crucial and eventual game-winning goal, once again striking quickly.  Jesper Mattila was able to find his brother, Julius Mattila, who took a slap shot right past Hawkey on his glove side to give BC the 3-2 lead within the first two minutes.

The Eagles then continued their physical brand of play, relying on Woll to keep Providence out of the net. BC was able to limit the odd-man rushes that originally let the Friars jump out to an early lead. In the final minutes of the game, the Friars pulled their goalie and looked to make one last push to tie the game. BC’s Christopher Brown was able to put the game away on an empty net goal, though, securing a big conference win at home.

The Eagles had a stark turnaround after the first period, playing much better defense and finding quality shots that resulted in goals. BC was able to control faceoffs, winning two-thirds of the draws (42-for-63). This is the team’s first win over a top-ten team this season, and they remain tied with Massachusetts atop the Hockey East standings. Behind one of the best first lines in the nation of Cotton-Mattila-Hutsko and great goalie play from Woll, it seems this team is poised to make a turnaround despite boasting zero non-conference wins.