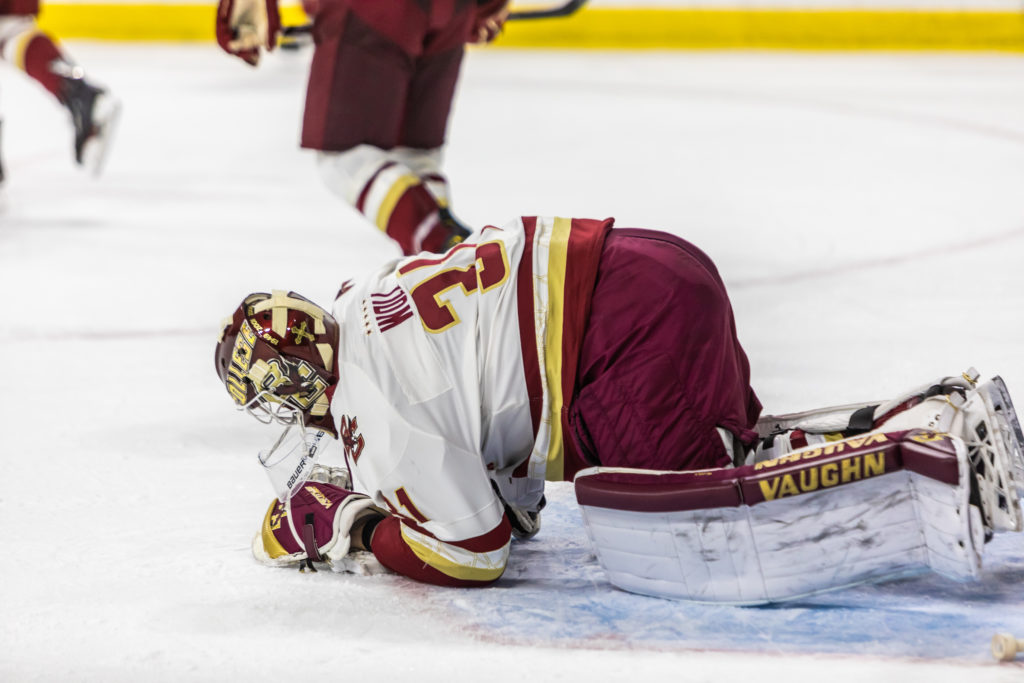 As the first period of Boston College men’s hockey’s road contest against New Hampshire came to a close, everything appeared to be going excellently for the Eagles. Thanks to goals from Christopher Brown and Oliver Wahlstrom, BC led, 2-0, and was well on the way to a second consecutive conference win after an impressive upset of Providence on Friday night.

From there, it was anything but smooth sailing for the Eagles, especially on the defensive end. The Wildcats outscored BC, 6-2, over the final two periods of play, scoring the final three goals of the game to complete an impressive comeback and hand the Eagles a 6-4 defeat.

As 10 combined goals might imply, the game was wildly entertaining, most so in the second period, which featured six goals. When the puck dropped for the second stanza, the Eagles (7-10-2, 7-2-2 Hockey East) already held a 2-0 lead, as Brown finished off a centering pass from Jack McBain, and Wahlstrom managed to sneak a shot from the high slot past UNH (7-8-6, 3-5-4) goaltender Mike Robinson for the early BC advantage.

But, just 85 seconds into the second period, the Eagles’ lead was halved, due to an unfortunate bounce. Richard Boyd dumped the puck into the Wildcats offensive zone, where it kicked off the end boards into the slot. UNH’s Patrick Grasso was fastest to react, backhanding the puck past Joe Woll before the BC netminder could regain his bearings.

The goal seemed to spark the Wildcats, who outshot the Eagles, 17-8, in the second period. Two minutes later, Angus Crookshank managed to infiltrate the BC offensive zone on a 2-on-1 break and drove to net before snapping off a low drive that snuck past Woll on his blocker side. Just four minutes into the second period, BC’s lead had been erased.

The Eagles attempted to respond, taking the lead twice more in the frame, only to see UNH respond each time. Just two minutes after Crookshank’s game-tying goal, Marc McLaughlin took the puck towards the UNH goal line before sliding a pass into the low slot. Aapeli Räsänen muscled his way past a defender to get on the end of McLaughlin’s pass and one-timed a low effort between Robinson’s legs. Then, after Liam Blackburn tipped a deflected shot past Woll to equalize, Christopher Grando located J.D. Dudek moving through the slot and fed him. The senior deked the puck to his forehand and then wristed a shot into the upper right corner of the net to give the Eagles a 4-3 edge.

Dudek’s try marked the last time BC was able to find the net. UNH, on the other hand, had no such problem. Right after Dudek’s goal, the Wildcats’ Ryan Verrier was sent to the penalty box for boarding, which provided the Eagles with a golden opportunity to extend their lead. Instead, UNH used the penalty kill to find a short-handed tying tally. Marcus Vela pressed all the way to the BC goal line, managing to create a turnover and send a pass to Grasso, who tied the game once again with a shot from the right circle.

The eventual game-winner didn’t come until almost 20 minutes later in the middle of the third period, but for the Wildcats it was worth the wait. Charlie Kelleher controlled the puck in the UNH offensive zone, before dropping a pass off to Ara Nazarian. Nazarian, who scored on a rebound the last time the two teams met in November, came back to haunt the Eagles again, beautifully finding the right side of the net with a slap shot off Kelleher’s pass.

BC was gifted an opportunity to tie the game just three minutes later, when Will MacKinnon was penalized for slashing and the Eagles gained a 5-on-4 power play opportunity. Unfortunately for head coach Jerry York, BC couldn’t capitalize, peppering Robinson’s net with seven shots to no avail. UNH made the Eagles pay yet again after Woll was pulled with under a minute to play, as Chris Miller picked up the puck near the blue line and calmly scored into an empty net to seal the game.

It was a disappointing follow-up to perhaps BC’s best performance of the season against Providence Friday night, but the loss also served as the latest reminder that the Eagles’ defensive unit has struggled since the three week mid-season break. BC has conceded four or more goals in three of five contests after the hiatus, after allowing more than two just once in the period between the start of Hockey East play from Nov. 2 to to Dec. 7, which spanned 10 games. The Eagles simply have to find some answers on defense, though the addition St. Lawrence transfer and USHL defenseman Ben Finkelstein may help matters once he gels with his teammates. Nevertheless, if BC continues to allow goals at this rate, its chances of finishing at the top of Hockey East will likely fade away.