Boston College women’s basketball has witnessed an offensive revelation under new head coach Joanna Bernabei-McNamee. In 2017-18, the Eagles averaged just 58.2 points per game. This woeful production on offense resulted in BC only securing seven wins, two of which came during conference play. Entering Sunday’s contest against Pittsburgh, the Eagles were putting up 78.8 points per game—good for 29th in the nation—and already boasted 12 wins. But on Sunday afternoon against the the Panthers, BC proved it could win without a potent offensive performance.

Even though the Eagles were visiting the Panthers, it was projected to be an easy victory, considering the fact that they beat Pittsburgh last year by double digits. Yet, in the early going, it appeared that the chances of a BC win were in jeopardy.

The Eagles, who have traditionally gotten off to quick starts this year, were stymied in the first quarter, only scoring eight total points and recording seven turnovers. BC may not have showcased its full offensive potential against Pittsburgh, but it bounced back and did just enough to manage a close 59-55 victory. Eagles (13-4, 2-2 Atlantic Coast) freshman Taylor Soule scored 13 points in just 21 minutes of game action, four of which came from the charity stripe in the final 18 seconds and sealed the win.

The Panthers (9-8, 0-3) came into the game with an offense similar to BC’s from last year, averaging a nearly identical 58.3 points per game. Much of this stagnant offense can be attributed to the injury of redshirt senior Aysia Bugg, who has not played since the beginning of the season due to blood clots. The guard was averaging over 14 points per game, and, in her absence, Pittsburgh has struggled to find consistent offensive production with only one other player, Cassidy Walsh, averaging over 10 points per game.

Even against a weaker offensive opponent, though, the Eagles greatly struggled in the opening minutes. BC only tallied three baskets in the first frame on 30 percent shooting. Turnovers were the primary culprit, as numerous mistakes started to mount for the Eagles, and Pittsburgh began to capitalize. Another concerning stat was found on the glass, as the Panthers outrebounded BC, 10-8, including a 6-3 margin on the offensive boards, which opened up the door for second-chance points. The Eagles were caught off guard by the Panthers, who thoroughly outplayed them and went into the first break with a seven-point cushion.

With Bernabei-McNamee regrouping her squad, the team came up with a much stronger effort in the second quarter. Emma Guy—who was rather quiet in the first quarter—proved to be her characteristic, efficient self as she converted all three of her field goals to score six of her team-high 14 points. Perhaps most crucial for the Eagles’ success was their ability to limit their turnovers. After slipping up often in the opening frame, BC did a much better job in limiting its mistakes, as it didn’t commit a single turnover in the second period. Outscoring the Panthers, 21-12, the Eagles retook the lead and went into the half with a two-point edge.

Following halftime, BC was unable to fully break away. The third quarter started out as a back-and-forth affair, in which the Eagles and Panthers traded baskets. Pittsburgh even took the lead with four minutes remaining in the period off a Jasmine Whitney layup. Whitney played a huge role for the Panthers, recording a team-high 20 points on 66 percent shooting from 3-point land, even though she came into game averaging only 8.9 points per game and shooting 25 percent from beyond the arc. After Pittsburgh briefly retook the lead, BC used a 10-5 run—backed by points from Guy, Taylor Soule, Mikayla Dickens, and Marnelle Garraud—to enter the final frame with a five-point advantage.

In the final quarter, the Eagles never relinquished their lead, even though the Panthers refused to go away. Milan Bolden-Morris struck from deep and Soule recorded a layup to give BC its largest edge at 10 points, but Pittsburgh did not give in. The Panthers made a strong push in the last minutes, as Whitney and Cassidy Walsh each drained triples to narrow the gap. But, in the end, Pittsburgh’s comeback effort came up short, as the Panthers fell to the Eagles by four points.

Georgia Pineau—who notched 23 points in the win against Pittsburgh last year—was held to just two on the afternoon. Fellow junior Taylor Ortlepp only scored six points and fouled out. Freshman guard Garraud scored only a single bucket as well. Dickens stuffed the stats sheet in a number of ways, piling up 11 points, seven rebounds, four assists, and 10 turnovers. The 10 turnovers accounted for 40 percent of BC’s 25 turnovers, but Dickens came up with a huge rebound at the end of the game—just as she did against Wake Forest—to keep the ball away from the Panthers and ultimately secure the victory.

While it wasn’t the best showing by the Eagles, they still eked out their sixth road victory in as many games. And, by defeating the Panthers, BC matched its conference total in wins from last season through just the first four games of the ACC slate. It wasn’t the most comfortable margin of victory, but Sunday’s contest was another display of the grit that Bernabei-McNamee has instilled in her team.

Earlier in the season, the Eagles were able to blow by most of their non-conference opponents and build up insurmountable leads in the opening minutes, but BC cannot rely solely on its talent to defeat ACC foes. The team needs to show its fortitude on a consistent basis like it did against Pittsburgh. The Eagles were picked to finish 14th out of 15th in the conference in the preseason poll, but, with the talent and effort that BC is displaying on a weekly basis, it is starting to seem like the Eagles will round out the year several places above that mark.

Featured Image by Kobe Hurtado / For The Heights 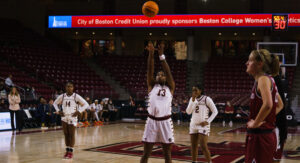 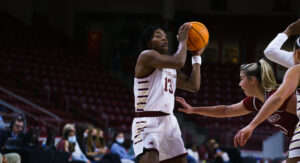 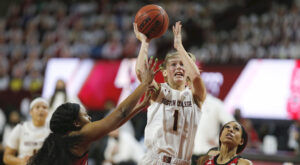