Home » Second-Half Surge Not Enough as Eagles Fall to Louisville 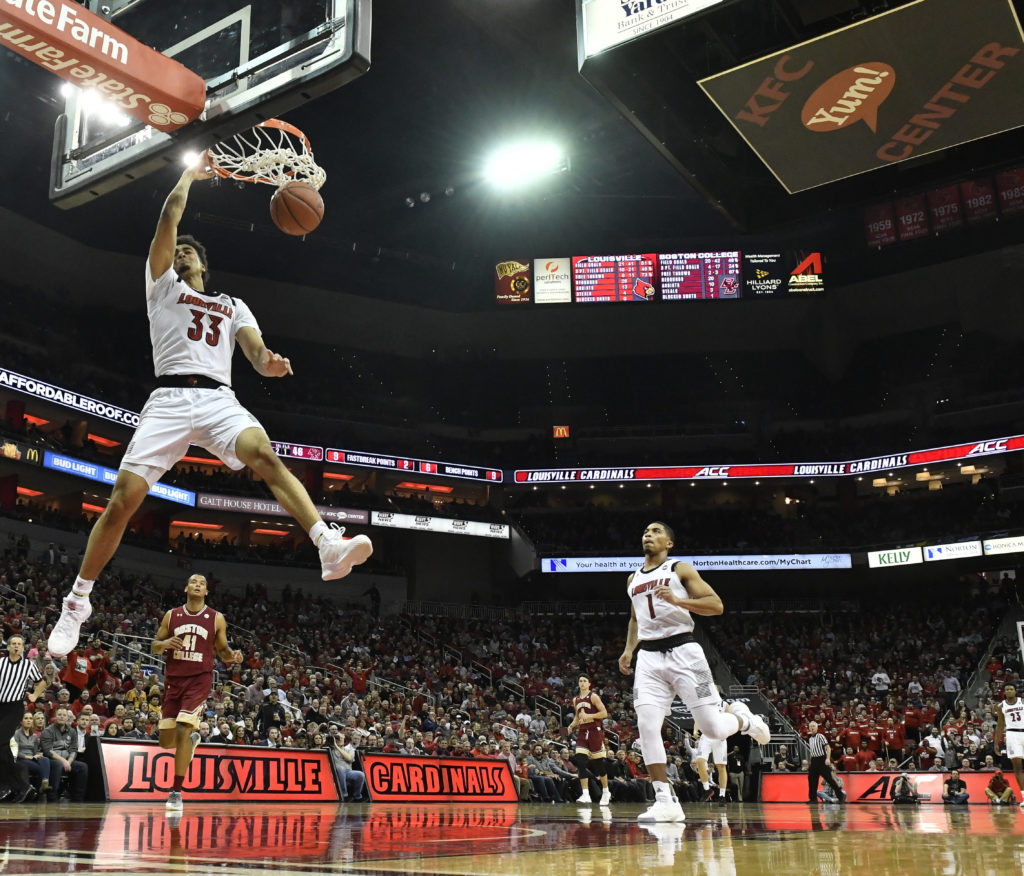 Second-Half Surge Not Enough as Eagles Fall to Louisville

Last year, Boston College men’s basketball couldn’t quite complete a spectacular comeback when it visited Louisville. The Eagles trailed by 18 with 3:57 remaining, but used a 22-4 run to narrow the deficit to just two after Jordan Chatman’s 3-pointer with 33 seconds left—but were unable to tie the game or take the lead in the final seconds.

On Wednesday, the story was much the same. Darius Perry knocked down a triple with 9:10 remaining to give the Cardinals a 71-48 lead, and it looked like the game was on the verge of reaching embarrassing territory for BC. But the Eagles—behind the hot shooting of Chatman—once again ripped off a huge scoring outburst, going on a 20-2 run over the next six minutes and cutting the Cardinals’ advantage to five points multiple times in the final moments. Despite this, BC once again couldn’t climb all the way back, as Jordan Nwora capped off a career performance with five points in the last minute, and Louisville defeated the Eagles, 80-70.

Things couldn’t have started better for BC. After Chatman missed a 3-pointer, Chris Herren Jr. snagged an attempted outlet pass from Nwora, took the ball to the rim, and banked home an acrobatic layup while being fouled. He converted the resulting free throw for a 14-12 Eagles lead, and energized the entire BC team in the process.

Jared Hamilton stepped just inside the 3-point line and knocked down a jumper before Chatman finally came to life and hit two shots from behind the arc. His last triple capped off a 14-2 Eagles run that put them ahead 28-16 and forced Louisville coach Chris Mack to call timeout.

Something he said must have worked, though, as the Cardinals looked like a completely different team after the stoppage. Dwayne Sutton—who finished the game with 14 points—bullied his way inside for a layup, then showed his range by stepping back and netting consecutive shots from behind the arc to cut the BC lead to just three. Next, it was Nwora’s turn to step into the spotlight. The sophomore, who leads Louisville in scoring, followed Sutton’s lead by knocking down back-to-back 3-pointers of his own.

The latter of Nwora’s shots from deep gave Louisville a 33-32 lead—its first since a Nwora shot from behind the arc made it 13-12 Cardinals eight minutes into the game—and set the stage for a 10-1 Louisville scoring spurt to end the half. Ky Bowman prevented the Cardinals from extending their edge even further with a chasedown block of a Malik Williams layup as time expired, but Louisville clearly looked the better of the two teams and had built a 10-point lead heading into the locker room.

The Cardinals began to further assert their dominance after the break. Khwan Fore also found his touch from 3-point range, netting two triples in the early minutes of the second half, and Nwora also found space to throw down a one-handed slam as Louisville’s lead ballooned to 55-40.

Seeking a way to slow down the Cardinals’ offensive fireworks, the Eagles turned to a soft press, in attempt to prevent Louisville from getting into its sets early in the shot-clock, and managed to force two turnovers. But, other than those two giveaways, the Cardinals remained potent on offense. Nwora—who finished the night with a career-high 32 points—got into the paint and scored with ease on two-straight possessions, and Christen Cunningham and Williams also scored before Perry’s shot from behind the arc gave Louisville a 71-48 advantage, its largest of the night.

BC, which started with a ton of energy on both ends, looked about ready to climb on the plane home. Slowly but surely, however, it started to make the plays necessary to climb back into the game. Chatman spotted up for a 3-pointer in the right corner, Bowman—who finished with a quiet 14 points—got an awkward floater to fall through the net while being fouled and made the free throws, and the Eagles cut the deficit to 73-59.

Chatman, who finished the game with six made 3-pointers after a shaky stretch of games, kept firing away. He hit another shot from long range in the right corner before rounding a Nik Popovic screen and draining a heavily-contested shot, bringing BC within single digits at 73-65. The Eagles bench exploded in celebration, and it sounded like the air had been sucked out of the KFC Yum! Center.

Yet, much like in 2017-18, BC couldn’t find the energy to climb all the way back. Bowman hit a free throw and a layup, and made a pretty pass to Popovic for an easy lay-up, but Nwora, who kept the Eagles at bay all game long, was responsible for finally squashing BC’s comeback hopes. With 52 seconds left and the shot clock winding down, he used a pump fake to send Bowman flying past him before calmly swishing a dagger 3-pointer. The shot put Louisville ahead, 78-70, and he added a dunk in the waning seconds for the final basket of the game.

BC’s scoring spurts in both halves were certainly a good showcase for the Eagles’ talent. The ability to rattle off that kind of run against a Louisville team that’s less than a week removed from a 20-point blowout victory over No. 13 North Carolina indicates that BC undeniably has the ability to compete on a weekly basis. But as Wednesday night also demonstrated, that kind of raw talent isn’t nearly enough if the Eagles aren’t consistent for the full 40 minutes.