Home » Walsh Speaks on Diversity, Housing at State of the City Address 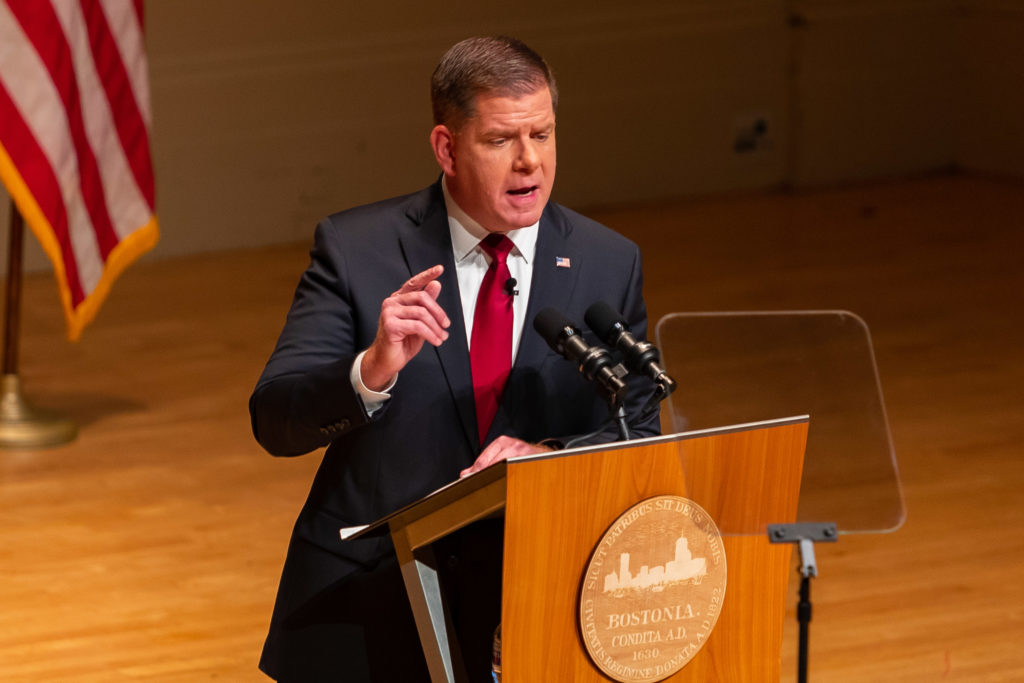 Walsh Speaks on Diversity, Housing at State of the City Address

Boston has improved in areas of diversity, housing, climate change, and unemployment, according to Boston Mayor Martin J. Walsh, BC ’09. The Democrat gave his State of the City Address at a crowded Boston Symphony Hall Tuesday evening.

He said, though, that while he’s proud of the city, he is concerned about the state of the nation. Communities are being left behind, people are being scapegoated, and the federal government is turning away from efforts to prevent climate change.

For examples of how to better bring people together and make progress in social justice, the economy, crime, and the environment, look to Boston, Walsh said.

“The White House has turned its back on climate change,” he said. “But in Boston, we believe in science.”

The Resilient Harbor Plan, the mayor said, will protect the city from floods. They also have a plan to be carbon-free by 2050.

Currently, unemployment in Boston is 2.4 percent, the lowest in history. The city has been ranked second in the country for moving people up into the middle class, according to Walsh, and was named the best city in the world to find a job.

Changes in Boston government have been historic, too, as the most diverse administration “from the cabinet to the front lines” was voted into office in 2018. Further, Boston has its first African American Police Commissioner, WIlliam Gross, and Rachel Rollins became Massachusetts’ first woman of color district attorney.

Ayanna Pressley, hailing from Boston, is the Commonwealth’s first African American woman in Congress. Walsh also shouted out Steve Tompkins, an African American sheriff. Boston has also been named as a finalist for the NAACP convention, Walsh announced, receiving a standing ovation in Symphony Hall.

“We put social justice at the heart of our vision because a more equal conversation means a more resilient city,” the BC alumnus said. “So we’ll keep leading the fight to defend immigrants. We’ll continue our groundbreaking work to achieve gender equality, and we’ll never stop protecting the rights, and embracing the identities, of our LGBTQ community.”

The middle class is a main focus of Walsh’s efforts, as he said that there will be more than 1,000 new homeowners in the next five years, due to the construction of affordable homes and an increase financial aid. The mayor has acknowledged a housing shortage and created a plan for improvement, which includes having 53,000 new homes in Boston by 2030.

Boston Public Schools (BPS) have undergone $300 million in renovations after the city listened to the visions of parents, teachers, and students, Walsh said. Another $800 million will be put into schools, according to Walsh. Before he entered office, the mayor said, BPS had not been on a regular construction plan in 40 years—two-thirds of the schools had been built before World War II.

Walsh announced a push to expand efforts for every generation in Boston, particularly the oldest generations. This year, he will launch the Age Strong Commission to serve the needs of seniors. The program, which is being revamped, was formerly known as the Elderly Commission.

He also spoke about Boston’s housing strategy for the homeless: So far, they’ve provided shelter for 1,600 chronically homeless people. They launched the Boston’s Way Home Fund last year, with the goal of raising $10 million over four years for more housing. After one year, he said, they have raised half of that. Walsh spoke about his genuine belief that no one is left behind, including those who are addicted.

“We are suing the opioid makers who fueled this crisis, because we are all paying for their greed,” Walsh said to roars of applause from the audience.

While he spoke about the ways people can respond to the opioid crisis—calling 311 if they see a needle, or emergency response to overdoses—he urged people to consider prevention and recovery methods. Massachusetts Attorney General Maura Healy’s office told Politico that one of her primary priorities is working on the state’s pending lawsuit against Purdue Pharma in the latest lawsuit born out of the opioid crisis.

“Our plan for a recovery campus on Long Island is not about building a bridge,” the mayor said about his proposal. “It’s about rebuilding a life, by getting that person, and thousands of others across our region, the care they need to get well.”

Walsh spoke about his responsibility as mayor in the opening of his address. He said it became apparent to him when a hotel worker named Leti came into his room the morning after he won his election in 2013 and said “We did it, we won.”

“It means opening doors for more Bostonians to walk through, people of every race, creed, and class, changing a city, changing a nation,” he said.