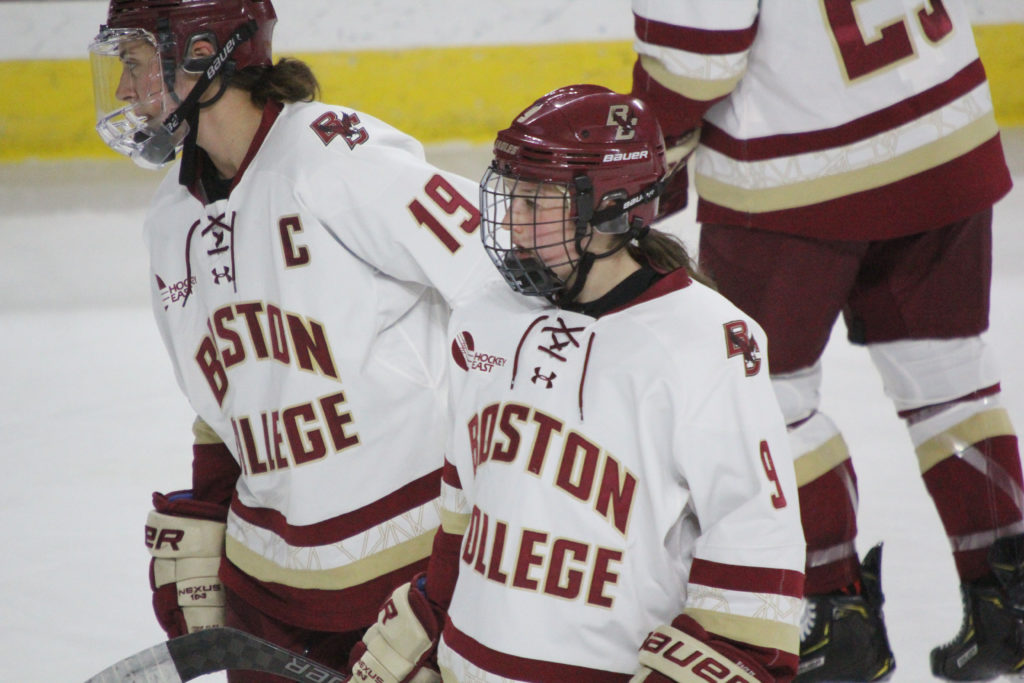 Entering Friday night’s contest, Boston College women’s hockey sought to extend its 21-game winning streak against Vermont. Yet, with the struggling Eagles dropping six of their last eight games, there was no guarantee that BC would continue its dominance over the Catamounts.

Through the first 15 minutes of the game, BC controlled the action. The Eagles owned a significant advantage in terms of shots on goal, pressuring Catamount netminder Melissa Black. Both Makenna Newkirk and Daryl Watts served as the primary attacking forces for BC, but it was Delaney Belinskas who jumpstarted the Eagles’ scoring effort. The junior notched her fourth goal of the season off a great dish from Erin Connolly. Less than two minutes later, Newkirk doubled BC’s lead by slotting a wrist shot by Black and the Eagles never looked back, earning a 4-2 victory.

Despite ruling the first period, the No. 10 Eagles (15-9, 12-7 Hockey East) faced an immediate response from Vermont (7-13-4, 5-10-2). Taking advantage of a Megan Keller penalty, the Catamounts scored with the extra skater just two minutes into the second frame, as Sammy Kolowrat blasted a shot by BC goaltender Maddy McArthur. The Eagles dominated the rest of the period but were unable to add to their lead. In one stretch of play, BC fired six consecutive shots at Black, yet none slipped by her.

Fortunately for the Eagles, it did not take long for them to seal the game in the third period. Just three minutes into the final frame, Megan Keller raced down the left side of the ice before firing her 12th goal of the year into the roof of the net. Five minutes later, Jillian Fey added the finishing blow. The freshman scored the first goal of her career, as she leveled a shot into the top right corner of the net. Vermont got one goal back late through Saana Valkama, but it failed to serve as anything more than a consolation prize.

This win comes at a crucial time for the Eagles. After suffering two separate three-game losing streaks within the last month, BC has been tested. Yet after taking care of the Catamounts and triumphing over No. 3 Northeastern last week, it appears as if BC is regaining their momentum at a critical time of the year.

However, it is notable that BC continued to commit penalties at an alarming rate. Entering Friday’s contest, the Eagles ranked second in Hockey East in penalty minutes. Against Vermont, BC players spent 12 minutes in the penalty box, as opposed to just four minutes that the Catamounts played down a skater. It did not cost the Eagles tonight, but it has hurt them all season long and will continue to harm them unless they get more disciplined, especially on the penalty kill.

Regardless, as BC proved once again tonight, it possesses the talent of a Hockey East title contending team. The question for the Eagles now is whether they can find some consistency and close out the last month and a half of the season on a high note.