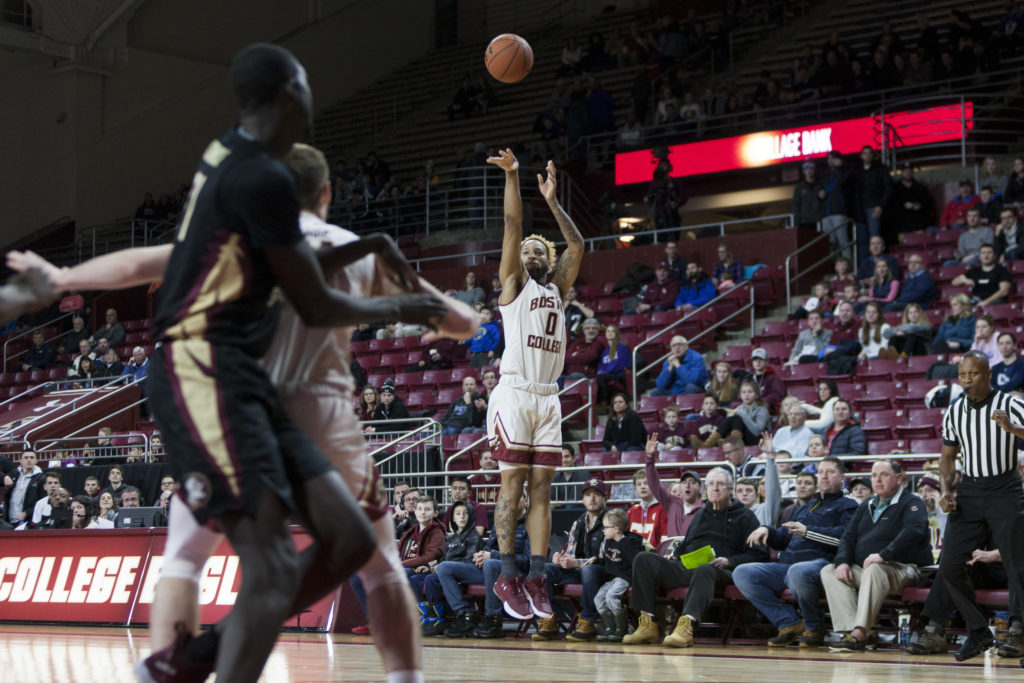 Bowman, Chatman Guide Eagles to Upset of No. 11 Florida State

Ky Bowman and Jordan Chatman are two of the biggest playmakers for Boston College men’s basketball. When both players catch fire, the Eagles are in position to pull off upsets—in last season’s win over No. 1 Duke, Bowman and Chatman combined to shoot 8-of-9 from 3-point range. But, up until Sunday afternoon, the two hadn’t been able to heat up at the same time this season. In the 13 games that Bowman and Chatman had been on the court together this year, there had only been one contest where each guard hit two or more 3-pointers. Through the same number of games last season, they had combined to reach that mark five times.

With Bowman and Chatman not gelling—and other injuries wreaking havoc on the rotation—the Eagles have stumbled. While initially enjoying success in the non-conference portion of play, BC entered Sunday’s contest against No. 11 Florida State on a five-game skid dating back to New Year’s Eve. Chatman, who missed three games with an ankle injury last month, needed time to work back into it. The redshirt senior only converted 11 percent of his triples to start off ACC play, but against Louisville, he regained his form and shot 60 percent from beyond the arc to nearly pull off the upset over the Cardinals. In that same game, Bowman was cold and missed all six of his 3-pointers.

In the early going against the Seminoles, it appeared that Bowman and Chatman had once again alternated. Bowman went 7-of-8 from the floor and accounted for 18 of the Eagles’ 36 points in the first half. Meanwhile, Chatman only had two points on 0-of-5 shooting. With BC down, 46-36, it needed a number of things to go its way, and one of those was for Chatman to find his stroke. In the second half, that’s exactly what happened. The BYU transfer poured on five 3-pointers, serving as the catalyst to propel the Eagles to a massive upset and their first ACC win of the year, 87-82.

One of the reasons BC (10-7, 1-4 Atlantic Coast) was able to notch a monumental victory was the fact that the team finally reached full health after a myriad of ailments that plagued a number of players. Ever since the beginning of November, Chatman, Nik Popovic, Steffon Mitchell, and Wynston Tabbs have all missed at least one game. Against the Seminoles, though, those four players, along with Bowman, were all in the starting lineup. With its ideal rotation, BC outplayed FSU (13-5, 1-4) in the opening minutes. Bowman started out hot, nailing two 3-pointers along with a jumper, and with Tabbs tallying a triple of his own, the Eagles raced out to a 17-11 lead.

In a similar manner to the Louisville loss last week, though, the wheels fell off. The Seminoles proceeded to tie the game at 19, and on the back of a 22-5 run, FSU took a commanding edge. Turnovers were problematic for the Eagles—they coughed the ball up nine times in the first frame, and the Seminoles turned these giveaways into points on the other end. BC limped into the half with a 10-point deficit. Bowman had 18 points, but his supporting cast was simply coming up empty. Couple that with the fact that the Eagles could not make a defensive stop and it seemed that any chance of an upset had vanished.

That was quickly proved wrong, however, as BC fought its way back into it. Bowman guided his team back, scoring six points in a row at one point to tie the game at 48 apiece. Mfiondu Kabengele immediately responded with a dunk in an effort to kill the Eagles’ momentum. Despite starting zero games for the Seminoles, the redshirt sophomore came into Sunday’s contest leading FSU in scoring with 11.8 points per game. Against the Eagles, he put up an impressive performance with 26 points and nine rebounds off the bench.

After Kabengele’s emphatic dunk, Chatman proceeded to explode with a scoring outburst. A 3-pointer from the shooting guard allowed BC to take its first lead since the first half—and he was just getting started. Tabbs then recorded a steal and fed the ball to Chatman, who once again struck from deep. Bowman then reeled in an offensive board and dished it out to Chatman, who nailed his third-straight triple for the Eagles to give them a 57-50 lead. Chatman’s remarkable display ignited Conte Forum and brought the crowd to its feet.

Now that the Eagles were playing with a true home court advantage, they fed off of the energy from BC fans and maintained their hot streak. While Kabengele hit several mid-range jumpers to narrow the gap, Chatman responded by knocking down two more shots from beyond the arc, and Bowman netted a triple of his own, along with a layup and another and-1 play. After the junior guard hit from the charity stripe, BC held a convincing 74-60 lead with under seven minutes left to play.

Unfortunately for the Eagles, it wasn’t easy coasting in the final minutes. The Seminoles rattled off seven-straight points to halve the deficit over the course of three and a half minutes. Bowman finally scored for BC, netting a layup, but FSU’s M.J. Walker converted from 3-point land to further diminish the Eagles’ edge. Popovic was then sent to the free throw line on three separate occasions, and the junior came through under pressure, hitting 5-of-6 from the charity stripe.

The Seminoles hit four free throws of their own, and a 3-pointer by Terance Mann made things dangerous for BC, cutting the lead to four points. What was once a 14-point cushion was now just a four-point advantage. In order to clinch the game, the Eagles desperately needed one of their shots to fall—and they got that in the form of Tabbs, who came through and delivered the dagger on a clutch 3-pointer. Bowman hit three more free throws for the Eagles—upping his point total to a whopping 37—and BC held on for the win.

There were a number of factors that contributed to this win, with 3-point shooting the biggest difference maker in the contest. Coming into the game, the Eagles were not shooting well from range, only converting 30.3 percent of their 3-point attempts. But with Bowman and Chatman on fire from beyond the arc, BC shot 61.9 percent from 3-point land, nearly doubling FSU’s 3-point conversion rate of 32 percent.

Even though the Eagles outshined the Seminoles from deep, they still only won by a mere five-point margin. This can be attributed to FSU’s dominance within the arc. With the Seminoles’ big bodies, they were able to put up plenty of points in the paint. Steffon Mitchell, now looking far more healthy than he was earlier in the year, played an enormous role in slowing down FSU. The sophomore did it all for BC, compiling totals of five points, eight rebounds, four assists, three blocks, and two steals.

“I think once we get more consistent, we’ll develop the identity that we all know we want,” head coach Jim Christian said. “We’ve definitely shown it in stretches of games, but to do it for 40 minutes, that’s when you really establish your identity, especially at the level that we play at in this league … We’re working on establishing who we are. We’re playing the right way.”

No one can knock the Eagles for their effort on the court—many of their earlier losses were a result of injury and the lack of depth that was exposed as a result. As the Eagles demonstrated on Sunday, they have the talent to compete in the ACC. It just took them a bit of time to put that talent on full display. If Bowman and Chatman can string together more dominant performances, the Eagles should be able to notch a number of victories against the bottom-half of the ACC, all while putting conference powerhouses on upset alert.