Among the thousands of protesters who filled the Boston Common on Saturday for the third annual “Boston Women’s March: Until All Voices Are Heard” were a number of Boston College students. The College Democrats of BC sent a group of 30 students, some wielding hand-drawn posters and noise makers, and others came with roommates and friends. The message of the afternoon was clear: The Women’s March is still relevant and not going anywhere.

In the days before the march, the Women’s Center held poster-making sessions, and Kathryn Berman, vice president of College Democrats and MCAS ’21, hosted a poster-making night in her dorm. Conversation centered on the impact of the march and the importance of continued civic engagement.

“It is always important for students and young people to get involved in politics, not only to go out and vote but also to campaign,” said Amir Orosca, MCAS ’19. “A lot of candidates this year were saying it’s not enough to just vote anymore, you need to get out and protest and campaign and stand up for what you believe in. As young people, it’s important to show what we care about.”

College Democrats members stressed advocacy and action in the face of complacency.

“We live in a nation in which women continue to be marginalized through discrimination, being underpaid, and sexualization,” said Gabby Kastrunes, communications co-director of College Democrats and MCAS ’22. “Attending the Women’s March is just one way that we may urge lawmakers to make a change.

“Although the situation for women has improved over the years, women’s rights still have a long way to go. We march to stand up against the injustices committed against women of all races, ethnicities, religions, sexual identities, abilities, socioeconomic statuses.”

The theme of this year’s march was “Until all voices are heard”—a message of inclusivity.

“We were inspired by the passion of all who used their voices to speak up against hatred, bigotry, and violence,” said Abbie Howell, a member of College Democrats and MCAS ’22. “We were especially excited that intersectionality was a main focus of the speeches, posters and sentiment of those in attendance.”

“Barring all scandals, we just need to make sure that every person feels included and kind of really be acutely aware of a lot of the intersections and oppression that lie with being a woman, and being a woman and black, and to be a woman and trans is a separate experience and separate form of oppression,” she said.

Above all else, students asserted that the message of the Women’s March should not be a yearly reminder, but a daily goal.

“The Women’s March is similar to the Women’s Center as a space where women can feel community, and feel that they are supported in their efforts for remedying gender and equity on campus, in Boston, and across the world,” said Julia Barrett, a Women’s Center employee and MCAS ’19. “So we have that sense here in this office so we support people doing things that are going to help them feel that and help them feel that they are taking steps and action towards improving gender and equity.” 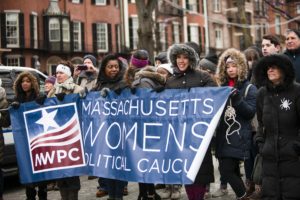