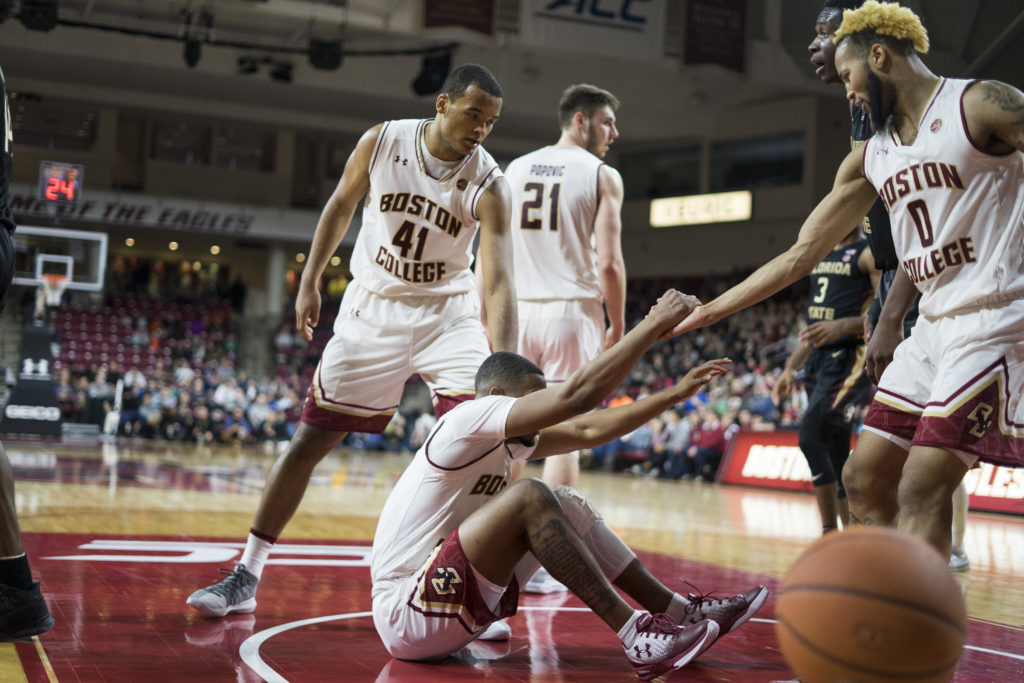 Boston College men’s basketball knocked off No. 11 Florida State, 87-82, on Sunday afternoon, using 51 second-half points to erase an early deficit and claim its biggest win of the year. It did so on the back of Ky Bowman’s 37 points, Jordan Chatman’s five second-half 3-pointers, a dagger from Wynston Tabbs, and a little bit of everything from Steffon Mitchell in a game that firmly established he was back from injury. While the first 20 minutes were largely forgettable, much of the action after the break reflected a team that has so much talent and potential that the Eagles’ 10-7 record—and 1-4 in conference play—is nothing short of underwhelming.

Beating the Seminoles, even if it required a 25-6 run and some late clutch shots once FSU clawed its way back, just prompts another iteration of a question that’s been asked of head coach Jim Christian and the Eagles many times over the past two years: How do you take the next step? BC entered Sunday afternoon’s game with five losses in a row, four in conference play, and shorthanded efforts had resulted in several frustrating defeats. Finally back at full strength, the Eagles came out of the gate against FSU strong, suffered their usual lapses, but had enough in the tank out of the break to rebound from an 0-4 start in conference play for the first time since the ill-fated 2015-2016 season.

So, if BC is ever going to contend for something more under Christian’s leadership and the Eagles, now is the time to take that step. The Eagles have a week to prepare for Wake Forest, who is under .500 and has just one win in five conference tries. They have back-to-back home games at the end of the month. Nagging injuries to Tabbs, Mitchell, and Chatman have vanished while Bowman was unguardable against the Seminoles. All of these things have, on paper, the team trending up. The only question, though, is if Christian can avoid the pitfalls of last season and get his team to put together a full 40 minutes on a consistent basis. If he can’t, and BC loses Bowman to the NBA and Chatman to graduation at the end of the year, a bulk of the hope surrounding the program will fade away, and the team will once again head toward even deeper irrelevance in the nation’s best conference. That, quite simply, is inexcusable. So what does Christian have to do?

It starts with the fact that his team desperately needs to find some form of consistency. The last two games have been frustrating examples of how hard it is for the group to string together 40 minutes of competent basketball—the wildly different results reflect the inconsistency. Against Louisville, a 10-point loss, BC built an early 12-point lead on the road. Then, in a disappointing fashion, the Eagles rolled over and conceded a 18-1 run at the end of the half. While BC would eventually heat up down the stretch—it trimmed as 23-point deficit to just five with several minutes left—it couldn’t make up for its earlier struggles and dropped a tough road game.

Against FSU, it was the exact same story with a different ending. The Eagles built an early seven-point advantage, only to watch the Seminoles use runs of 8-0 and 12-0 to eventually enter halftime up by 10. The 17-point reversal had students groaning in the stands, especially with everyone not named Bowman struggling mightily. In its typical hot-and-cold style of play, though, BC went on a 25-6 run to take the lead for good. Defensive struggles down the stretch—FSU hit three 3-pointers and worked its way back into it—made the final result way too close, even requiring a Tabbs 3-pointer with 24 seconds left to get sufficient breathing room, but the fact was that the Eagles did close out their visitors.

These two games, defined by runs from both teams, are something that BC needs to do a better job with avoiding. This inability to play a complete game is problematic for the Eagles, especially against teams in the conference that can heat up in an instant. BC can’t rely on impressive scoring runs, like Chatman’s three consecutive 3-pointers against the Seminoles or going 13-of-21 from distance as a team, to erase deficits it builds by lackadaisical perimeter defense and forced shots on the other end. The team also runs an incredibly inconsistent 2-3 zone at times, which often results in wide-open shots whether beyond the arc or in the soft spots. Christian needs to get his players into better position to avoid letting up long-winded runs from the other teams, especially if it wants to avoid some of the tougher results from last season. In 2017-18, the Eagles had countless losses in which they either made a late push that came up short because of the size of the deficit, or defeats where they built a big lead only to watch it fade away late. On Jan. 3, they lost to then-No. 25 Clemson in the final minutes, despite erasing a 19-point second half deficit. On Feb. 6, despite an incredible effort from Jerome Robinson, they couldn’t fully close a 18-point gap against Notre Dame and lost a shootout. On Mar. 3, they lost to the Seminoles after being outscored 18-4 in the final six minutes.

These are three of many games marked by “frenzied finishes” or “big runs.” The problem for Christian and his team, though, is that you can’t always bank on making that big run, or closing enough ground. Digging these holes in the first half time and time again is unsustainable, especially if BC jumps out to an early lead only to squander it. The reason this is such a noticeable point is because Christian and the Eagles coaching staff have arguably the most depth and talent than they’ve had in a while.

Consider the rotation: Bowman is a NBA-caliber point guard who is averaging 20.9 points and 8.4 rebounds per game—he’s also first in the country in percentage of his team’s minutes played and boasts an unrelenting motor. Chatman is a sharpshooter, who, when on, is easily one of the best in the conference—he’s connected on 11-of-17 from beyond the arc his last two games. Tabbs rounds out the guards as a freshman who, even if he’s slowed down, is effective at slicing into the lane and protects the ball well. Mitchell rarely is called upon to score, he’s too busy filling up the stat sheet everywhere else. Nik Popovic is a prototypical European big man, he’s adept from mid range and has displayed some improved post moves to the tune of 13.5 points per game. Throw in Jairus Hamilton, Jared Hamilton, Chris Herren Jr., and even Luka Kraljevic as of late, and Christian has a roster with plenty of different looks to go with.

So why, against FSU, did the bench play just 27 minutes? Jairus, the younger Hamilton brother, has seemed to frequently find himself in his coach’s doghouse, while Jared is still getting worked into the team since gaining eligibility at the start of the second semester. This is a problem that Christian and the Eagles need to work on—part of the reason the team is susceptible to runs is because the same guys often stay out there for long chunks of play. Bowman is an explosive scorer, but even he will cool down for bits of time. Look at Bowman against DePaul, where he was held to 11 points, or against Louisville where he had just eight points in the second half when his team was desperately attempting to rally. Chatman and Tabbs can both disappear from games—the latter hasn’t exactly looked the same since his return from injury. Add in tiredness on defense, and you see any ACC team with sufficient depth start to pick at them. The Seminoles, for instance, saw Mfiondu Kabengele come off the bench and put up 26 points.

Boiled down, the Eagles are wrestling with consistency and a more balanced rotation. These things obviously go hand in hand with each other, and it speaks to a potential problem with the coaching if the same issues from last year are creeping in again. Yes, several players have missed games with injury and that can cause problems with chemistry and consistent efforts, but it doesn’t excuse losing to a six-player Notre Dame team or digging too big of a hole against Louisville. Losses to Virginia Tech and Virginia are understandable—BC even made the former close down the stretch—but it can’t just limp through another up-and-down ACC season.

The conference is incredibly difficult, yes, but with the talent and experience the Eagles have, the win over the Seminoles needs to be the baseline moving forward. Look at Pittsburgh, for instance. The Panthers went winless in the conference last year, endured a mass exodus of players transferring, hired a new coach in Jeff Capel, and—even with the fact that three of their top four contributors are freshmen—have gone 2-3 in the ACC thus far with surprise victories over Louisville and FSU and a narrow six-point loss to No. 21 North Carolina State. If Capel can do that in his first year, there’s no reason that BC can’t be playing at a more consistent higher level in Christian’s fifth year. That starts with stringing together a complete 40-minute performance, and with everyone back from injury, that should be the expectation moving forward.

The Eagles have the talent to compete with nearly anyone in the ACC, it’s just the execution hasn’t been there for long stretches. Ultimately, if BC suffers through another roller coaster season in which games are defined by furious finishes that come up short, there’s reason to consider moving on from Christian. Yes, he’s brought the program back from the lowest of lows, but anything other than an increase from last year’s 7-11 mark in conference play should be regarded as a huge underperformance of expectations.