An additional bus stop near University Health Services (UHS) at 2150 Commonwealth Ave. was added to the Newton Eagle Direct and Newton Eagle Limited routes on Jan. 14. The addition of this stop, spearheaded by the Council for Students with Disabilities (CSD), is intended to relieve the stress of getting to Health Services put on students who have mobility issues and disabilities, according to Sean Dunphy, the chair of CSD and CSOM ’21.

“For all students, especially if you have a permanent disability or temporary disability, it’s really not fair for you to have to Uber to the University’s health center,” said Dunphy. “Forcing [students] to pay out of their own pockets seems a little ridiculous.”

The Newton bus route had previously included a stop near the University Health Services Center, Dunphy said, but it was discontinued before he arrived on campus in 2017. Dunphy made it his fall semester goal to ensure that the bus stop was added once again. Additionally, he said he hopes that adding the new stop will relieve the congestion that has been placed on the Eagle Escort system by students who have struggled to make their way to Health Services from either the Main Gate or Robsham Theater bus stops.

Dunphy’s effort was aided by the Office of the Dean of Students, particularly with Rory Stein, the assistant dean of students with disabilities. Dunphy credits Stein’s openness and willingness to find agreement as one of the main factors that contributed to the revival of the UHS stop, as Dunphy also noted that the CSD chair before him had attempted to do the same thing during Dunphy’s freshman year.

“[Stein] is so open and receptive, so when we met earlier this year, he and I were really trying to push and get this bus stop added, so all students can go to University Health Services,” said Dunphy.

The new Health Services stop, which is slated to run for the rest of the year, runs along the traditional Newton bus route. The stop is across from 2150, near Walsh Hall just before the crosswalk.

CSD has been working on releasing a survey to evaluate whether or not Eagle Escort services need to be revamped in order to provide quicker service, specifically to take care of students in need of medical assistance. Details regarding the progress that CSD and the Office of the Dean of Students are making on that survey are due out in the coming weeks. 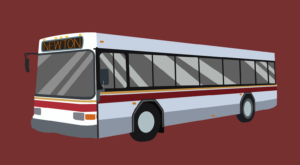