Nina Chanel Abney’s mural is the first thing viewers encounter when visiting the Institute of Contemporary Art in Boston. It occupies the Sandra and Gerald Fineberg Art Wall, an unconventional space commissioned annually for an artist to install his or her work.

The setting allows for natural light from the floor to the ceiling windows surrounding the Wall. This showcase space is uniquely in the Institute’s lobby, where visitors can see the artist’s creation for free. Its accessibility, according to curator Ellen Tani, alters the experience.

“To have this situated in a public lobby where it’s always there I think brings out a different kind of comfort with visitors in terms of engaging with it,” said Tani.

The mural, Abney’s debut in Boston, was completed on Jan. 17 and will remain until March 15, 2020. Abney is an abstract narrative painter whose work covers a variety of forms such as playground surfaces, fashion collaborations, and canvases. Her art tells a story of modern tensions such as racial and gender discrimination, disenfranchisement, and current events that capture national attention. But Abney’s work is primarily open to interpretation.

“The narratives that she’s creating can’t be distilled or centralized to be about those topics,” Tani said. “That’s not something that she’s interested in. She’s not interested in giving you an answer.”

Abney is captivated by the power of public messaging from screens to billboards and today’s constant flow of information. As such, her visuals are reminiscent of what we see all around us and bring to light the potential conflicts underneath what we do not question in the everyday. Her simple figures, symbols, and short, direct words such as “wow” and “stop” echo what we use to communicate, such as emojis and texts, and bright colors make the scene hard to ignore. In fact, the relationship between her mural and the world it represents is stylistically linked.

“This work registers as something almost digital, although you know it isn’t, because this is actual material on a wall,” the curator said, “but the really clean edges of the forms, the typeface that’s used, the really flat saturated colors, it seems like it was born in the digital realm.”

The colored vinyl cut-outs were designed on a computer and then applied to the wall. The bright colors and the sizes of the symbols evoke an age of distraction by signaling what we need in order to get our attention. An intriguing black and white checkerboard background might reference segregation or other disparities, and numbered figures raise the question of dehumanization although the figures themselves appear playful. This ambiguity of her work is part of Abney’s message and goal.

“A lot of what’s happening right now in the world is something that we can’t articulate, and I think that kind of ambiguity is really important for her to preserve in her artwork,” said Tani. “It’s an important exercise for us as viewers to grapple with that ambiguity, to try to understand how we make meaning out of what we see.”

Featured Image by Keely Dickes / For the Heights 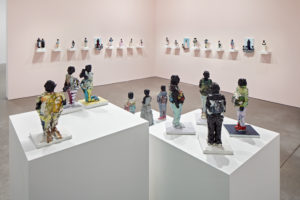 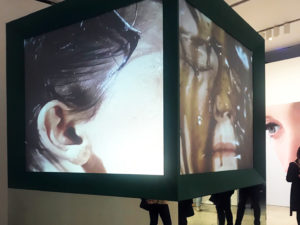