More Than 1,000 Students Flock to Two-Day Career and Internship Fair

The Boston College Spring Career and Internship Fair spanned two days, with 54 employers each day speaking to a total audience of approximately 1,073 students.

A broad array of industries were represented in the Heights Room, giving students the opportunity to explore a variety of potential careers.

This year’s iteration was split into a two-day event. In the past, students have found the fair overwhelming and stressful, often reporting that they did not not have a chance to truly see all the companies that they had wanted to explore.

“We divided the career fair into two seperate days grouped by industry cluster so students could decide whether to attend one or both days,” said Joseph Du Pont, associate vice president of Student Affairs and Career Services.

Du Pont also highlighted the important role the spring career fair plays as a jumping off point for BC students who are just starting the process of finding a summer internship or a job, which can be confusing or overwhelming for first-timers.

“We emphasize that this fair is truly a kickoff event to help promote all the other work we do so students realize we are here to help at any stage in their career education,” Du Pont said. “Getting a job or an internship is important. It is also important for students to know that BC is committed to helping them lead lives of meaning and purpose, and the Career Center can play a big role in helping students discern that.”

Many employers were happy the fair took place over two days, as it allowed students who otherwise would have passed them by to survey their industries. This year’s changes made it easier for students to seek out all their options and take time to have real conversations with all employers of choice.

“We like coming to the career fair because it gives us a great opportunity to meet tons of new people, specifically this year when they separated it into two different days,” said Joseph Compagna, a production coordinator at a marketing agency called Cramer. “I know last year when we were here we were kind of flooded out by the sea of people going to Fidelity and business companies, but this year, now that it’s separated, gives us more opportunity to meet people who are into creative work and can help us out in that aspect.”

Compagna also mentioned how important coming to BC is for Cramer. The company’s founder, Tom Martin, played for BC men’s hockey, and his number hangs from the rafters in Conte. Another of Compagna’s colleagues came to the company through an internship she held during her time at BC.

Many other employers also emphasized that they love coming to campus to recruit new talent, due to how well rounded BC students are and how successful alumni have been in making a tangible impact on their companies.

“We like to come to BC because you guys are all very motivated students,” said Boston Beer Company’s Sabrina Rossi. “We have a lot of alumni in our company who have been very successful and were hoping to find more.”

“I think the main reason why we’re so interested in coming to BC is the selection of students that you guys have,” said Kellie Rizzo, who works at Luxottica, an eyewear company. “They’re all well-rounded, just great students overall.

“When looking for our internship opportunities, we’re really looking for people who have a collective experience, whether that’s majoring in something great, having that classwork experience, or maybe prior internship experience, and I think that the students at BC really embrace that as a whole, and they’re really involved in their community.” 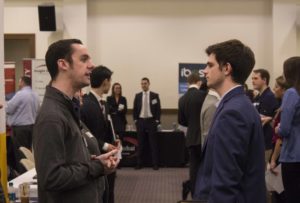