FIDLAR has remained on the fringes of popular rock music since 2012, when the band released its self-titled debut album, a 14-song ode to getting drunk, getting high, catching waves, and occasionally doing all three at the same time. Four years after their sophomore album, Too, FIDLAR finds itself in a precarious situation: On Almost Free, the Los Angeles-based band sways between adulthood—crooning about heartbreak on “Called You Twice” and sobriety on “By Myself”—and adolescence—singing about superficiality on “Can’t You See” and substance abuse on “Alcohol.”

Distant apocalyptic sirens ring in the 13-song album, right from the opening track, “Get Off My Rock,” a territorial diatribe that takes listeners through a Beck-ian convergence of hard rock drumming and irreverent riffs. FIDLAR continues the life on the run it established for itself in its first two albums through frontman Zach Carper’s lyrical rampages, such as “F—k it, I need a cigarette / I need a bag of ice, I need some Heineken.”

Singles “Can’t You See” and “By Myself” continue to build momentum for the album following “Get Off My Rock.” Although “Can’t You See” presents a sonic foil to its predecessor, the track grounds itself in the pre-established theme of territory, this time criticizing the L.A. hipster stereotype. A slick guitar-and-drum combo provide a simple backdrop for the superficial sarcasm of Carper, who mouths off lyrics such as “Oh gluten-free, it’s killing me” and “And baby I get paid / ‘Cause I’m a DJ.”

Given FIDLAR’s jaded criticism of the DJ lifestyle in “Can’t You See,” “By Myself” arrives with a twinge of irony: The rock band rattles off a carefree beat laden with LCD Soundsystem influences on the three-and-a-half-minute track. Overproduction reigns king on the track, with eccentric sounds popping in between lyrical ramblings about a deplorable, self-indulgent lifestyle. Although atypical for FIDLAR, the upbeat, airy sound of the two tracks comes wrapped in radio readiness as if they were manufactured for non-stop airtime on KROQ, L.A.’s well-circulated alternative radio station.

“Flake” returns FIDLAR to its usual hard-rock sound with heavy guitar riffs and lyrics rebuking flakes with venomous delivery, courtesy of guitarist Elvis Kuehn. Staying at the surface level, FIDLAR follows with “Alcohol,” a track that embodies the blatant spirit of its name.

FIDLAR appears to stack the album’s foremost tracks at the top of the tracklist, perhaps to the backend of the album’s detriment. Separated by the winding instrumental title track, the second half of the album is where thematic conformity is laid to rest in favor of chaotically disjointed track-by-track ricocheting.

The enjoyably cheesy ’80s trumpet-heavy beat of “Scam Likely” disguises uninspired attacks on wealth inequality, a topic that is a bit too big for FIDLAR to chew. Growing pains persist in “Called You Twice,” a heartbroken love song that enlists female vocalist K.Flay. The track opens with a guitar riff eerily similar to that of Bush’s “Glycerine.” Unfortunately for FIDLAR, the 2019 rendition of the track fails to reach the same level of sincerity as the 1994 original, with empty lines such as “Smiling as I look back / Wondering why you took so long to see.”

A quick tempo change occurs with the following two tracks, “Nuke” and “Too Real”—both heavy songs that feature screaming vocals from Carper and racing guitar lines. “Too Real,” however, is the saving grace of the back half of the album with its ample discontented rage and clever lyricism. Having received nods from major music publications in September for the track’s dystopian montage featuring clips from The Andy Griffith Show and possessed Care Bears, the song is able to capture the disillusionment of the Trump-era event without visual aids. The breathlessly sprinting beat and lyrical snarl give FIDLAR its teeth back just before the close of Almost Free.

The glory of “Too Real” is short-lived: In the true non-uniform fashion of the album, “Thought. Mouth.” returns to cause the tempo to plummet one last moment. Weirdly resembling the Silicon Valley theme song, the beat features an oscillating techno opening that somehow morphs into an annoyingly palatable beat during the first verse and a full-on rock breakdown during the chorus.

Incoherent as a whole, the surf rockers’ third album occasionally succeeds in producing a fresh, original sound but makes too many attempts to hang on to its earlier image in the process. Much less an album and more an amalgamation of songs with no particular theme or tempo, Almost Free is hardly free of imperfections. 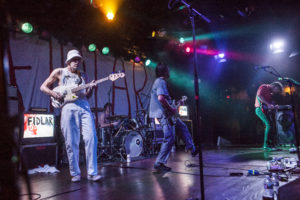