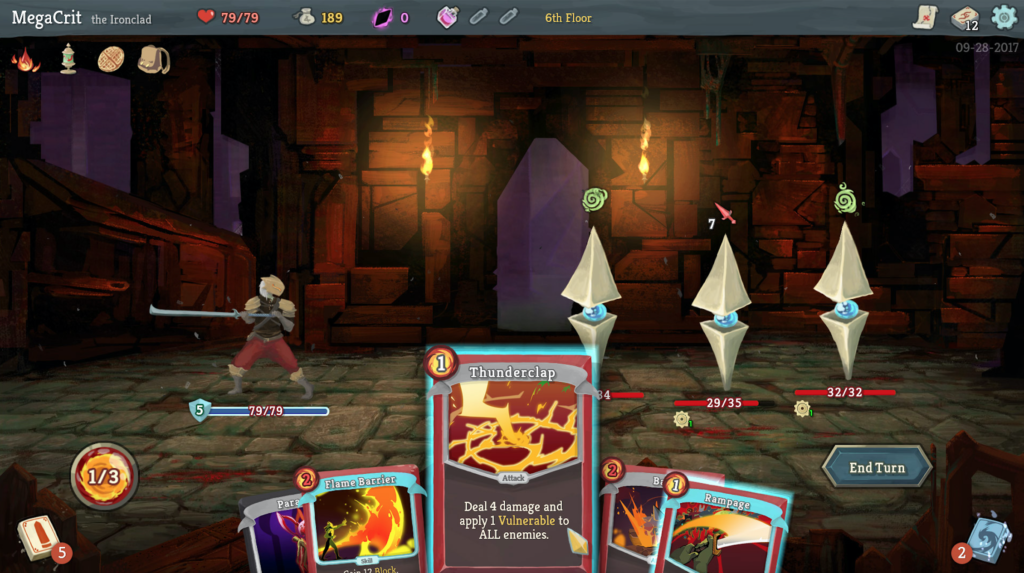 On Wednesday, Slay the Spire left Early Access for its full release on Steam, after being in Early Access since November 2017.

Slay the Spire is a roguelike card game, developed by MegaCrit, a small indie video game company based in Seattle, as its first game. The roguelike genre is a type of roleplaying game that has procedurally generated levels; turn-based combat; and permanent death, making each death a fresh start for the player. Since the initial release, Slay the Spire has added 94 cards to its original 283 and a third character to its original two.

Slay the Spire is a dynamic, deck-building card game requiring both luck and decision-making, keeping the player constantly calculating but also hoping for a lucky draw or drop. The player chooses from one of three characters and obtains cards to fight enemies as they climb levels of the spire, culminating in a boss fight at the end of every large level.

Gameplay begins with a preset basic deck, different for each character, with each card having a different energy requirement assigned to it. The starting amount of energy that can be used for playing the cards each turn is three, and the standard draw of cards for each turn is five. The player, thus, draws five cards randomly each turn and has three energy to play the cards. When a card is played, that card goes into the discard pile, and all cards drawn get discarded at the end of the turn. When the draw pile is out of cards, all the cards get re-shuffled back for a new draw. At the end of a battle, the player usually receives prizes in form of money, potions, and relics that give permanent character buffs, and a choice out of three cards, also randomly generate.

A full play through usually takes about 40 minutes (if the player doesn’t die prematurely, that is), and involves a lot of chance, as the draw order, the item drops, and even the map generation is all completely random.

Beating a level of Slay the Spire is no easy task—players might think they have a perfect deck, but still remain at the mercy of the random number generator, as the next generated fight might just have the exact counter to your deck.

What really gives Slay the Spire staying power is its unpredictability. The added factor of luck and permanent death gives a lack of control that can be thrilling, as a skilled player can still experience the woes of losing. The feature of ascension levels also keeps the game interesting—when players beat the entire run with a character, they unlock a new ascension level for that character, which comes with increasingly hard handicaps that makes the game much more difficult as it goes on.

Slay the Spire is truly a multifaceted experience. The frustration, on the one hand, at losing a very promising round from a bad draw or a chance encounter with a difficult event is inevitable. On the other hand, the sheer satisfaction when you beat a run, and hear the familiar “click” that signifies the unlocking of a new ascension level is better than any other video game can provide. To beat Slay the Spire, you need luck, skill, and good judgment—when to be greedy, and when to not. Just like the game, the player must be dynamically calculating risks and rewards, whether that’s by choosing to take a 50 percent chance at either a great relic or a punitive relic, or taking the path with the stronger elite bosses (who drop relics) rather than the one without.

Slay the Spire combines decision-making with experience and judgment, creating a rich gaming experience. The art style and intricacy of the game has developed greatly since the beginning of early access, and at full release has expanded to 16 languages thanks to the contribution of the community. The game is aesthetically pleasing, and dialogue has a distinct sense of humor that makes the game not only a card game, but also a story.

For an independent game developer that often has a more difficult time creating works on par with large companies, MetaCrit delivered a game full of complexity in Slay the Spire. Throughout the Steam Early Access period, MetaCrit consistently maintained updates and kept the community informed and involved. Slay the Spire has sold over one million copies even in early access, and seems to be on track for future success as well. Working on developing access to different platforms, the developers of Slay the Spire have big dreams and future aspirations to bring their game to a wider stage.