Boston College women’s basketball came into a difficult road matchup with Miami on a two-game losing streak—respectable losses to Florida State and Notre Dame preceded it. While the Eagles set the pace from the beginning, with the help of Makayla Dickens and strong efforts from Taylor Soule and Emma Guy in the paint, BC struggled mightily with foul trouble.

The Eagles ultimately saw four players foul out, and it proved too much to overcome late in the game, with Miami taking advantage of many free throw opportunities and escaping with a narrow victory, 76-73. It was a high-drama ACC matchup, constantly going back and forth, but sloppy play from BC (13-7, 2-5 Atlantic Coast) tipped the scale in the Hurricanes’ (18-4, 6-1) favor. Here are seven things that stood out amid BC’s third straight defeat.

BC executed well on offense for the most part against a tough defensive matchup—the Hurricanes entered with a top-40 defense. Guy and Georgia Pineau were efficient, getting points on the board early on in the game. Both have been patient on offense and good at attacking inside all year. The Eagles also succeeded at getting back in transition and maintaining their scoring ability, despite Miami’s unending pressure. In the first half, BC shot 52 percent from the floor and led Miami in points in the paint, 26-14, even though it was at a height disadvantage. Taylor Ortlepp led the Eagles in points with 12 at the break—she’d already connected on two of her team-high three 3-pointers. Still, while BC had a lead, it was only up two points, as the result of the Hurricanes taking 24 free throws in the first 20 minutes of play.

Soule entered Sunday’s game averaging about seven points per game, but against Miami she already had nine points off the bench by halftime. She has great physical strength and elevates to the cup when scoring layups. Even as a freshman, she doesn’t shy away from contact and operates on the court with a lot of confidence, bullying her competitors in the paint. By the third quarter, she was 4-for-4 from the line and had 12 points in the game. Like several of her teammates, though, she ran into foul trouble. Her exit was easily one of BC’s biggest losses, as she departed in the fourth quarter with just under eight minutes left. This really hurt the Eagles’ offensive efforts, as her team was +3 with her on the court.

It was a pretty physical matchup between the two teams. The Eagles have been aggressive throughout the season—but BC upped the ante against Miami. From the first quarter on, the ACC foes were battling in the paint and the backcourt. The Eagles held the Hurricanes to just 35.7 percent shooting from the field in the first half and a similarly low 39.1 percent mark in the second, but also sent Miami to the line for for 25 and 24 attempts, respectively. They gave  Miami too many opportunities to score, in large part because they couldn’t consistently defend without fouling.

BC controlled the pace for the majority of the matchup. Even when it was down, it never gave in, keeping the score relatively close and making its hosts sweat out a win. Dickens was especially composed and poised, while still being aggressive on the attack. She was integral in dictating the speed of the game for the Eagles and getting them points inside the paint. They kept tight pressure on Miami, delaying their offensive set and transition back to defense. BC challenged Miami’s depth, especially at the post position. Toward the end of each quarter, BC never lost momentum, even if it was down. Five minutes before halftime, the Eagles scored five straight times down the floor. Their attack was steady and impressive, which allowed them to create high-percentage field goal attempts.

Quite simply, BC’s foul trouble is what cost it the game. At times, the Eagles were forced to triple team Beatrice Mompremier inside, who posed a major threat to its defense and frequently drew contact on her way to the basket. BC also had a tough time dealing with the assorted dribble-drives Miami was taking, which often disrupted the flow of its defense.

Because of an uptick in personals, the Eagles were forced to sit some of their star players in the third quarter—Guy logged her third foul of the matchup just two minutes into the third quarter, and Dickens, Soule, Lowery, and Pineau were all in foul trouble shortly after. This would come back to haunt them, as with 49 seconds left in the game, the Eagles faltered. They were down by just one point, but Dickens fouled out of the game and gave Miami the chance to extend its lead, which it did and didn’t relinquish. Overall, BC had 30 recorded 30 personals and sent the Hurricanes to the line for 49 free throws.

While it did so with limited chances compared to its opponent, BC enjoyed one of its most successful days at the charity stripe. The Eagles came just a few percentage points shy of setting a season best in free throw shooting, hitting 16-of-18 from the line for an 88.9 percent mark. That’s only a few percentage points shy of the 92.3 percent clip that BC recorded against Holy Cross, but that was accomplished with five fewer attempts.

In the first quarter the Eagles were a perfect 6-for-6. Soule was a key factor for BC at the line, finishing 5-of-5, while Pineau—who is a 73 percent free throw shooter—also did a great job at making her shots from the line, hitting 4-of-6. By the final frame, BC was 15-for-16 in free throw attempts.

Dickens has been an important player for the Eagles this season, even more so in recent weeks, and really got the ball rolling at Miami. She excelled at resetting offense and helping the Eagles get back in transition. She had a total of 12 points in the game, with a team-high six assists as well as five rebounds. In the third quarter, Dickens found Guy in the paint to ignite a 9-1 run, giving the Eagles a 59-51 lead. It was a major loss for the Eagles when, soon after, she had to be benched because of too many fouls, especially considering the slim scoring margin. 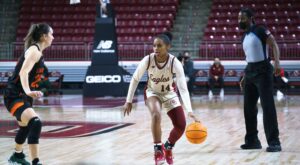 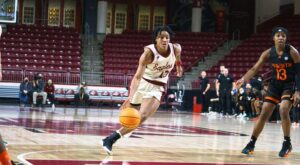 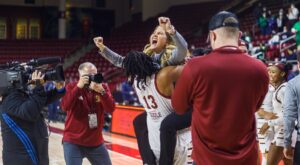