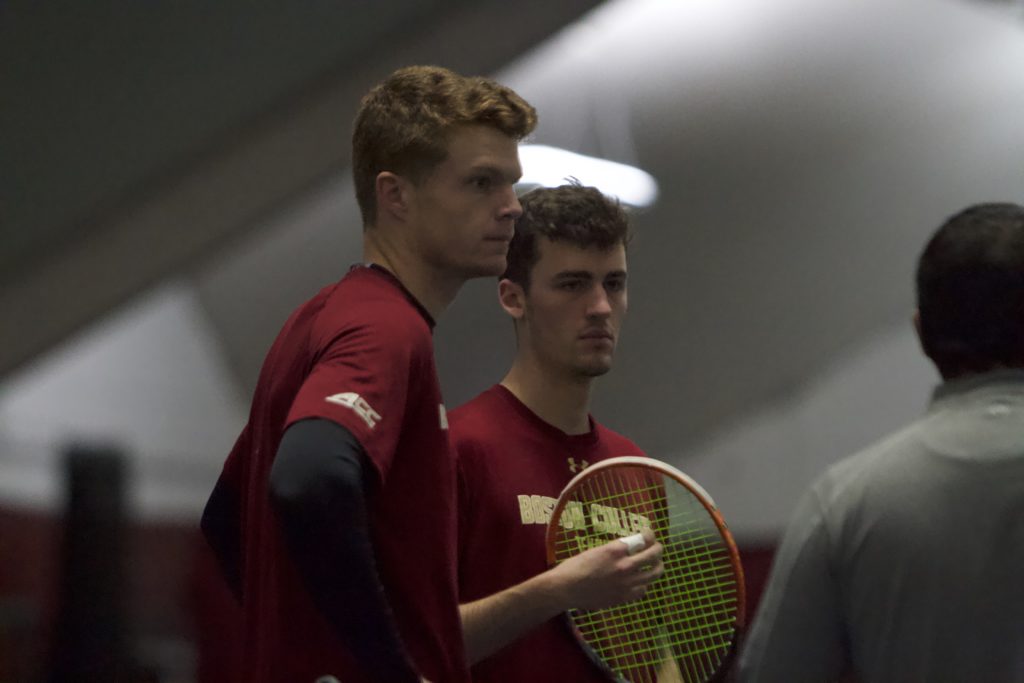 Despite opening the spring season on the wrong foot with a disappointing road loss to St. John’s on Friday, Boston College men’s tennis returned to action on Tuesday afternoon with clear intent to pick up its first win of the semester. With newfound vigor, the Eagles easily blanked nearby Connecticut, 7-0, in the home opener, cruising to an easy win across all courts. With sharpened technique and apparent attention to detail, BC nabbed the doubles point and continued to pile on from there. Playing at a level unrecognizable from that of last weekend, the Eagles evidently found their rhythm and made the quick shift to a winning mentality just in time to build confidence in the front end of a three-game homestand.

Apart from a few impressive plays from UConn’s top duo Yili Zheng and Hank Hill, BC faced few obstacles in sweeping the Huskies. Soon after Derek Austin and Sean Mullins dismantled the top Husky double pair, 6-4, Conor Mullins and Santiago Montufar stuffed away the doubles point for the Eagles. The duo took down Jack McLlister and John Holtmann, 6-3, rebounding from falling in their first match against St. John’s four days prior.

BC was far from done, though, as the Eagles proceeded to manhandle the Huskies across all the single’s courts, refusing to concede a single point to their visitors.

The Huskies proved inconsistent in single’s competition—they initially gave the Eagles a scare in their opening sets—but BC recovered and only gained momentum from there. Austin battled and found a way to secure the first set in his top matchup with Zheng, then amplified his serving game in the second frame to eventually tally another point for the Eagles, winning 6-4, 6-0. With consistent net play and impeccable foresight, Austin made it near impossible for Zheng to keep the ball in play, making for a quick shutout of UConn’s top seed.

In the neighboring court, Markus Nordby conceded the first set to Holtmann (6-3) in the game’s most contested match of the night. Nordby exhibited resilience, however, and ran away with the next two sets, 6-2, 6-3, cruising to another impressive victory and quieting any talk of a UConn comeback. Nordby, like Mullins and Montufar, had also struggled on the road last weekend and dropped consecutive sets, so it was a good sign from the Oslo, Norway native.

Max Mendelsohn’s match mirrored that of his teammate Austin, shaking off early pressure from his Huskies opponent in Hill before running away with the point. As was the story of the night, Mendelsohn felt slight pressure from Hill in the first set but managed to secure the frame, 6-3. It was only a warmup, as Mendelsohn built to a climactic second set in which he shut out his opponent, 6-0, in a near flawless manner.

BC went on to showcase its depth, as its remaining singles players secured wins in their respective matches, making for an effortless showcase of talent in the home opener. In the fourth and fifth slots, Sean and Connor Mullins beat McLister and Justin Warren, respectively, with the former needing a tiebreaker to finish the day with two wins. The Eagles also got a victory out of the sixth slot, with Alexander Chieffalo dispatching UConn’s Christian Provenzano with ease—he won 6-1, 6-1.

The Eagles managed to play far above their competition in executing thoughtful and clean plays across the board. This will prove to be key as they transition into one of the toughest parts of the season next month. While they have two matches against rival Boston University and Southern New Hampshire this weekend, those pale in comparison to the perils of the conference schedule, where BC finished just 1-11 last year. The Eagles beat this weekend’s opponents by a combined 13-1 last spring, so they’re largely a tuneup for the looming ACC play.

Still, BC has historically struggled in league action, which means—quality of opponent aside—it will need to capitalize on every opportunity against non-conference opponents if it plans on piecing together a superior win total to previous years. With two matches remaining before a road trip to Notre Dame, the Eagles must maintain their rhythm in order to stockpile confidence as they prepare for an intense spike in their level of competition.

What We Learned About BC’s 2019 NFL Draft Class From the Senior Bowl﻿
Three Teams File to Run for UGBC Presidency, Executive Vice Presidency