Home » Battle, Syracuse Use First Half Run to Power Past BC 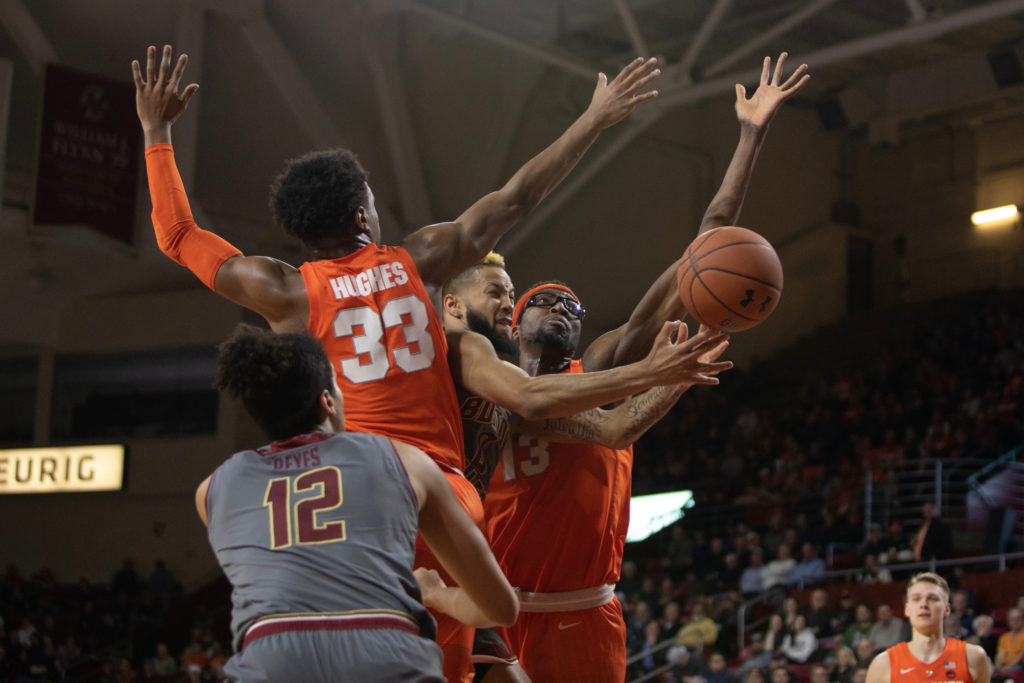 Battle, Syracuse Use First Half Run to Power Past BC

For two minutes and 42 seconds during Wednesday night’s game against Syracuse, Boston College men’s basketball looked like it was running through a casual practice, making all the right plays. The Eagles answered an early Orange bucket with 10 points in a row, moving the ball well against the elevated 2-3 zone and connecting on a pair of 3-pointers. After BC’s Jordan Chatman sunk an open shot from distance, making the most of a perfect pass to the perimeter from Nik Popovic in the center of the zone, Syracuse head coach Jim Boeheim had seen enough and called a timeout.

With a loud Conte Forum—even if a good portion of them were wearing orange—it seemed like BC had landed a strong opening punch and were poised to make things difficult for an Orange team that had limped into Chestnut Hill after a 22-point loss to Virginia Tech.

Instead, the Eagles would quickly run into a scoring drought of just under six minutes as Syracuse went on a 14-0 run. BC looked confused on offense and helpless on defense, it struggled to get any open looks before the shot clock was in single digits, and let the Orange’s plethora of shooters fire away from distance. By the time halftime mercifully came for the Eagles, Syracuse had outscored them 40-25 since the opening salvo, using seven 3-pointers to build a lead. The Orange didn’t let up after the break, either,  as Tyus Battle scored 21 of his game-high 31 points down the stretch. No amount of heroics from a shorthanded BC side—Jordan Chatman and Ky Bowman both scored 21 points—was enough to erase what grew as large as an 11-point lead for Syracuse, who held on for a 77-71 victory.

It was a frustrating loss for the Eagles (11-8, 2-5 Atlantic Coast), who were hoping to extend their winning streak to three games after starting conference play with four straight defeats. BC simply didn’t have an answer for Battle in the second half—it attempted to guard him with a variety of players, including Jared Hamilton off the bench—and the Syracuse playmaker capitalized. The junior, who’s been running the point for the Orange (15-6, 6-2) of late, was able to beat his defenders off the dribble or with a devastating pull-up jumper.

“I think when you have a great player like that and you give him some teed-up shots early in the game, you get him going,” BC head coach Jim Christian said. “He’s good, he’s a lot to handle. He has mid-range game, he’s explosive and he can get to the basket. We didn’t have great matchups for him, and he had a great game.”

Without Wynston Tabbs, who missed his fourth game with a left knee injury, BC wasn’t able to respond to Syracuse’s initial defensive adjustments. Tabbs would’ve been able to space the Orange better with his ability to drive, pass, and shoot from an extended range. Instead, the Eagles attempted to go through both Nik Popovic and Steffon Mitchell in the middle of the zone, but neither found much success. Several times, Popovic would hesitate with the shot clock winding down, and the offense was unable to string together strong offensive sets.

Chris Herren Jr. was largely ineffective in 10 minutes of play for BC, but Hamilton was able to have an impact off the bench. He had 12 points and a pair of steals, but the offense was pigeonholed through Bowman and Chatman during the night—to mixed results. Chatman took 12 long-range shots, the most he’s attempted since Feb. 13 against Pittsburgh last season, but he only hit four after knocking down five or more in each of his last three games on fewer attempts. Bowman was aggressive at times, but he was largely limited from driving into the lane and the offense felt very forced at times. The duo had 42 points together, but those buckets came on 28 shots, and Boeheim and the Syracuse defense did just enough to prevent either one of them from exploding.

The Orange, meanwhile, enjoyed a highly successful offensive game—it averaged nearly 1.3 points per possession with Battle guiding the way. In the first half, the 14-0 run featured a little bit of everything. Elijah Hughes hit consecutive 3-pointers—the first with the shot clock winding down—and even celebrated with a mock air guitar celebration. Battle had a slick up-and-under layup, then Oshae Brissett emphatically took a lead with a dunk over BC’s Johncarlos Reyes. After an Eagles shot clock violation, Brissett absorbed contact to finish in the lane, then Frank Howard punctuated the run with a deep jumper.

It was a whirlwind sequence for Syracuse, and was one the team would replicate later in the game. Chatman knocked down 3-pointers on successive possessions out of the halftime break, but the Orange didn’t break down. Even more impressively, when Hamilton skied for a emphatic two-handed dunk with 12:08 left on the clock that cut the Syracuse lead to just two, Boeheim’s side responded with an 11-4 run. Battle had eight of those points, while Brissett had a momentum-sucking three-point play.

That run largely secured the win for the Orange, BC would get as close as five after a trio of free throws hit by Chatman, but Buddy Boeheim—the head coach’s son—knocked down one of his three 3-pointers on the game and added a fast-break layup after a Eagles turnover to push it back to double-digits with two minutes to go.

Buddy was a story in and of himself—he scored 13 points in 21 minutes of action after stealing starting guard Howard’s minutes. At one point, a “Buddy Boeheim” chant rang down from the stands, and no amount of heckling from the students about his father was enough to slow down a guard that entered averaging 4.7 points per game.

All in all, it was a disappointing final three-fourths of the game for the Eagles. They failed to make any significant adjustments on the defensive end—Battle was springing free for open looks time and time again, and that’s inexcusable against a player with a hot hand—while simultaneously struggling to pick apart a zone they knew was coming. Granted Tabbs would’ve been helpful in spacing and made things a lot easier, the team as a whole didn’t seem cohesive. Popovic struggled to do much down low, even when the Orange interior defense was lacking, and both him and Mitchell ran into foul trouble and had a pair of turnovers.

To make some noise in the ACC, BC really needs to win the games it’s more evenly matched with—and Syracuse was the second game of a three-game stretch that it really needed to win all three of. Ultimately, the upset of Florida State only looks good for so long if you can’t beat teams that you have the ability to.

“This is a league that is unforgiving,” Christian said. “This game is over. We’ll learn from this game, and we have to get ready for Notre Dame, which is another good team that is just as hungry and shoots the ball just as well.”

The Eagles’ first-half lapse was indefensible, and it speaks to a recurring problem the team has faced—without a complete 40-minute performance, winning in the ACC is nearly impossible.