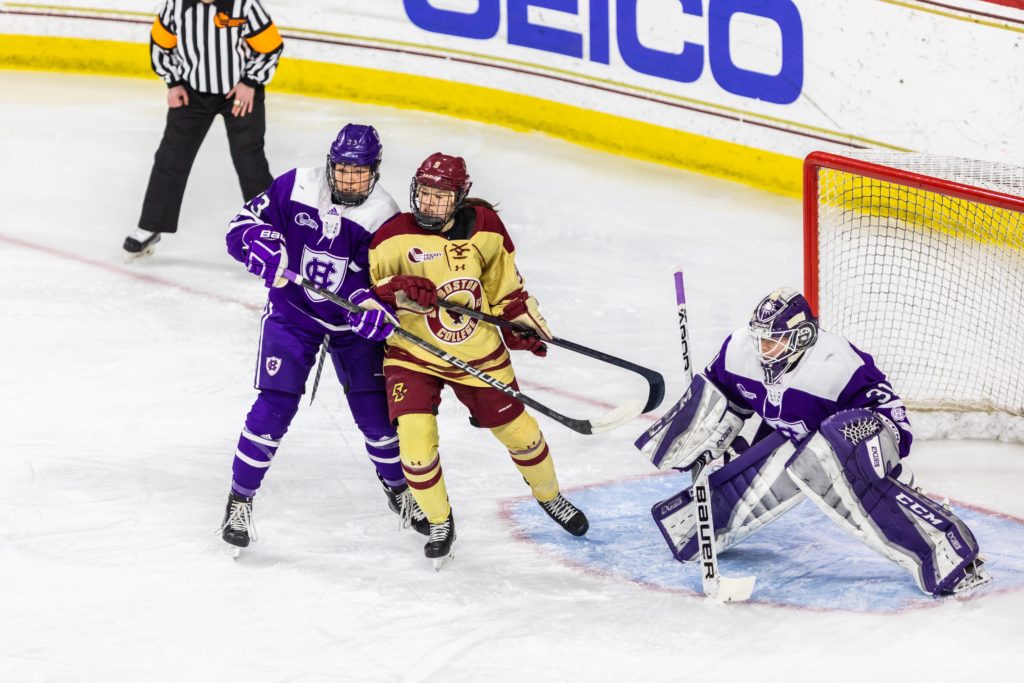 Six Different Players Score for BC in Rout of Holy Cross

As the days wind down before the annual Beanpot tournament, Boston College women’s hockey had one last hurdle before heading to Harvard. Coming off a five-game winning streak, the No. 7 Eagles took on a reeling Holy Cross team—the Crusaders had lost five straight and last registered a win on Nov. 30—and after three periods of dominant play, BC skated away with a 6-0 win.

For BC (19-9-0, 15-7-0 Hockey East) goaltender Maddy McArthur, recording yet another shutout—her fifth of the year, one off the nation lead—so early in her career was a credit to staying focused.

“You really have to stay focused in these kinds of games,” the freshman said. “You never know when you’re going to get shots. There’ll be a period of 10 minutes where you might not and it’s all about staying focused. We don’t take any team lightly.”

The Eagles didn’t waste a second and the puck had barely dropped by the time BC’s forwards had settled in around Holy Cross (1-24-1, 1-20-1) goaltender Jada Brenon. The Crusaders didn’t make it easy for BC, though. Deep in their own territory, the Crusaders were able to intercept passes and block shots, keeping the Eagles from too many open looks.

After 10 minutes of scoreless action, Holy Cross became more aggressive and started taking shots from the circles, but the Eagles’ defense, paired with McArthur’s quick hands, deflected any attempt that was directed toward its own cage. Despite slowing for a bit, BC soon found its golden opportunity.

Daryl Watts closed in on Brenon and skated past the freshman before flicking her wrist as she was passing the frame and sneaking the puck into the back of the cage. Less than a minute later, Serena Sommerfeld picked up a pass from Kelly Browne and shot it on Brenon, where it tipped the top of the post and behind her, giving the Greenwich, Conn. native her first goal of the season.

After logging two goals in the span of a minute, the Eagles had found their rhythm, and shot after shot on Brenon had her scrambling to block whatever came her way. Despite its lead, the period wasn’t without its woes for BC.

With six minutes to go in the period, Olivia Finocchiaro was called for too many players on the ice. The two minutes came and went smoothly, and the Eagles easily killed off the penalty. Less than a minute after returning to full strength, BC found itself with an advantage. Holy Cross’ Maeve Reilly was called for elbowing, and—with an extra player—the Eagles made a home for themselves in front of Brenon. Even though it attempted numerous shots throughout the power play, BC couldn’t connect, and Holy Cross came out of the penalty unscathed.

The Eagles were given another advantage early in the second period, after Katie MacCuaig was called for hooking in the Crusaders’ own territory. BC again was quick to move and peppered Brenon with shots, but the four players left on the ice were quick to block the Eagles’ shots and killed off the penalty.

After logging her first goal of the game and 15th of the season, Watts was all over the puck, reluctant to give Brenon a moment’s rest. Early in the period, the sophomore passed the puck behind Brenon to Lindsay Angew just in front of the goal line. With the netminder distracted, the Oakville, Ontario native was able to tuck it into the cage from the crease. The goal was reviewed by the referees, but in the end the play held, and the Eagles extended their lead to three.

Just like their initial two goals, the Eagles were able to turn around quickly for another. Two minutes after Agnew picked up her ninth goal of the season, Ryan Little corralled a pass from Kali Flanagan in the neutral zone and closed in on Brenon. Free to skate in on net, Little slipped a shot around Brenon’s blocker and into the back of the net. The Eagles weren’t done yet, though. Again closing in on Brenon, Caitrin Lonergan passed the puck behind her to Kelly Browne, who buried a wrister from the circle. With three consecutive goals within five minutes of each other, it was clear the Eagles couldn’t be stopped as they headed into the second break.

Holy Cross opted to give Brenon an early exit, subbing in Julia Pelletier heading into the final frame. Early in the third, Emma Lange was called for interference, and the Eagles were given their third power play of the evening. In a concerning manner, though, BC again couldn’t make the most of the one-man advantage, finishing the night 0-of-3 against a team with the worst power play in Division I hockey.

Right after the game returned to full strength, Megan Keller was whistled for her own interference call, putting the Eagles on their first power play kill since the first period. BC killed off the penalty easily, preserving its five-score lead. After holding an unrelenting Eagles offense in check for about 15 minutes, Pelletier met her match in Lonergan. When the junior broke away from her defensemen to head 1-on-1 toward the goaltender, Pelletier came out of the cage to block the shot. The move proved fatal, as she effectively passed the shot back to Lonergan, who took advantage of the open goal and whipped it past Pelletier, solidifying BC’s six-goal win.

After six straight wins, head coach Katie Crowley and her team are looking ahead to the challenge of the Beanpot, a tournament they’ve won three years in a row, but will have their hands full against the likes of No. 3 Northeastern and No. 8 Boston University.

“Around this time of year it’s tough. You want to get into that Beanpot game because it’s so exciting and an exciting time of year,” she said. “Now our focus is on Harvard. No matter what your record is at this point, these Beanpot games mean something a little bit more, and you’ll see that on Tuesday.”