Home » ‘In the Flesh’ Explores Performance Art as Form of Protest

‘In the Flesh’ Explores Performance Art as Form of Protest

The African and African Diaspora Studies program (AADS) brought, Ashon Crawley—an assistant professor of religious studies and African American and African studies at the University of Virginia—to campus on Tuesday, where he spoke on his intellectual and artistic journey, unearthing the hidden traditions rooted within black praise and worship music.

Crawley’s visit was a part of AADS’s “New Directions in African and African Diaspora Studies” lecture series. He began by breaking down his lecture, “In the Flesh: Prayer, Praise, Protest,” into five sections.

“Section one: And we have to figure out a way to be together,” Crawley said.

Crawley’s unusual beginning was intentional: In choosing to begin with “and,” he set the audience up for building connections. Adding onto the initial “and,” he fleshed out the hidden connections within black praise and worship in each section, establishing where the origins come from—black queer culture, Islamic tradition, even the sound of the Blue’s evolution within the United States.

“What is unsaid, but certainly felt and told is the black queerness of black sacred music,” Crawley said.

He makes a powerful claim: that the presence of black queerness makes possible the very practice of black praise and worship.

Within these sections—each one a new milestone—he marked the progression of his intellectual study and emotional journey with his work. He reached a turning point, moving from study to experiment and from experiment to immersion.

While reading an excerpt from his book The Lonely Letters, he recounted how he came to create an art piece inspired by the practice of clapping. The professor showed a video of a little girl covered in paint, clapping her hands together, splattering paint onto walls, paper, and herself. Crawley explained how he was inspired and reminded of the way it emulates music. His study shifted into action, as he focused on creating artwork that captured the energy of this little girl clapping her hands.

Crawley revealed his resulting art pieces on the projector. Then he repeated the clapping, but included a tambourine, mixing movement and music. And then, once more, placing canvas on the floor, blasting black praise and worship music, stomping paint into the paper and moving to the rhythm, he allowed the power of the music to control him and immerse him in the vibrations. Red, blue, yellow, and black paint was splattered and/or stomped onto these three canvases. Combining study and visual representation, Crawley’s intellectual journey took on a new form.

“The work I do isn’t about being an academic,” Crawley said. “I care about trying to practice justice with other people.”

There is a drive behind the work Crawley creates, no matter whether his art takes the form of words, paint, or music. His mission is one of passion and emotion. It’s a total immersion of the senses into his study of black queerness in praise, worship, and gospel music—and for Crawley, it’s personal.

Update (3/14/19, 1:34 p.m.): This article has been updated to reflect the role the AADS program played in bringing Crawley to campus. 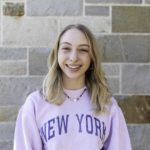 Grace is the Associate Arts Editor for The Heights. She is from Kansas, and knows she should have named her dog Toto, but instead she named her Daisy. She is interested in fashion, films, music, and photography. She is not opposed to social media, but refuses to get on Twitter.