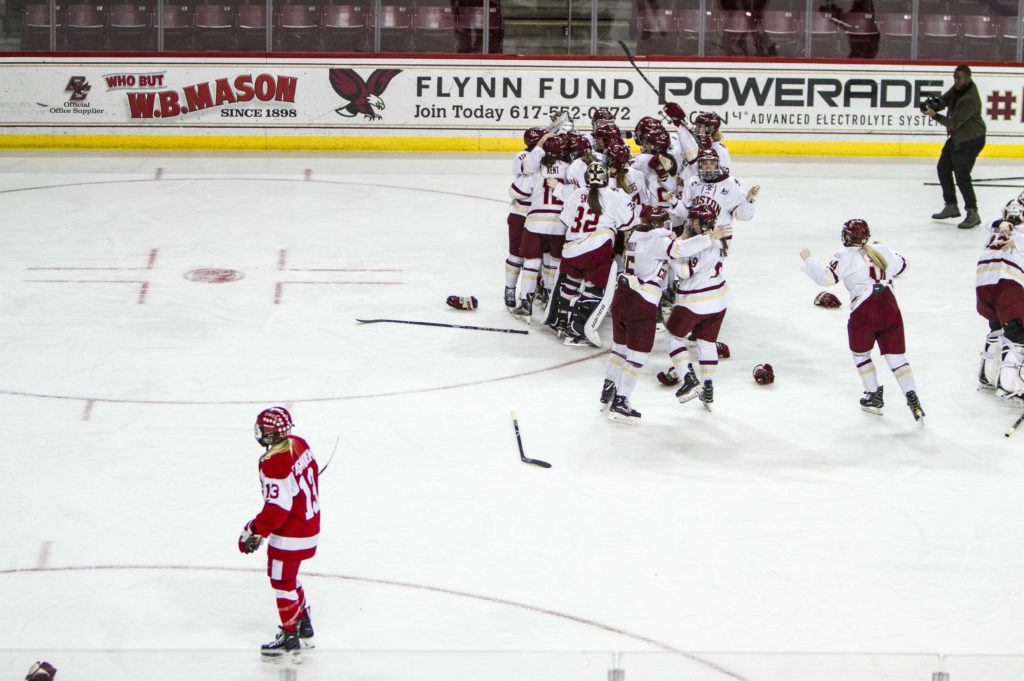 Tuesday evening, Boston College women’s hockey travels to Harvard, looking for its fourth straight triumph in the annual tournament played by the Eagles, Boston University, Northeastern, and the Crimson. The past three years have seen the same result—the Eagles lifting the trophy—but in different ways. There was the 2015-16 team, which outscored Harvard and the Huskies, 15-0, amid an unstoppable march to the title, the 2016-17 squad that utilized a pair of third-period comebacks, and last year’s iteration, which needed overtime to pull out a thrilling championship victory over the Terriers. In preparation for the 2019 Beanpot, here’s a look back at how BC captured the trophy in each of the past three seasons.

Eagles fans will remember this team as likely the most dominant women’s hockey team that BC has ever seen. Despite falling just one game short of the ultimate goal—a national championship—the Eagles rattled off 40 consecutive wins to begin the season, becoming just the second team in NCAA history to ever reach the 40-win mark, and won 37 of those 40 games by multiple goals. They certainly didn’t slack off in the Beanpot either.

BC’s semifinal opponent was Harvard, which the Eagles will also face off with in the 2019 semifinal. Any hope the Crimson had, however, of slowing BC’s roll dissolved after just one period. The Eagles found the back of the net five times in the first frame, as Tori Sullivan, Kaliya Johnson, Toni Ann Miano, Megan Keller, and Alex Carpenter all managed to beat Harvard netminder Emerance Maschmeyer to give BC a significant edge heading into the locker room.

The last two periods didn’t see quite as many goals, but the Eagles refused to take their foot off the gas pedal. Five minutes into the second period, Lexi Bender cut through the slot and scored a one-timer off a pass from Dana Trivigno to extend the advantage to 6-0. Keller added her second goal of the game three minutes later right after a shift change, and Carpenter put the finishing touches on an 8-0 blowout win midway through the third period with her second goal of the frame. For the game, BC managed to pepper the Harvard goal with 48 shots, while Katie Burt was barely troubled, needing to make just 12 saves as the Eagles skated their way into the championship game.

One week later, BC faced off against Northeastern in the championship game. The Huskies ended 2015-16 second in Hockey East, but in the Beanpot the difference in quality between the Eagles and their Boston rival was readily apparent.

BC didn’t enjoy the same offensive explosion that it manufactured against Harvard in the first period—that was saved for the final frame—but still held a comfortable 2-0 lead after one. Haley Skarupa opened the scoring less than three minutes into the contest, converting a power-play opportunity, before Makenna Newkirk slid the puck through Northeastern goaltender Brittany Bugalski’s legs to double the Eagles’ advantage.

In the second period, the teams went scoreless, but any ideas the Huskies had of creating some third-period magic was emphatically squashed by a BC attack that simply overwhelmed the Northeastern defense. For the second time in the tournament, the Eagles erupted for five goals in a frame. Trivigno—who was named tournament MVP—opened the floodgates with a long rebound just 1:25 into the frame, before scoring twice more in the period, while Kenzie Kent and Keller chipped in with goals of their own to seal a dominant 7-0 win and give BC its first Beanpot trophy since 2014.

The 2016-17 team wasn’t quite as dominant as the 2015-16 one—the Eagles finished the season 28-6-5 and lost in the national semifinals to then-No.1 Wisconsin—but still enjoyed a successful season that was capped off with Beanpot and Hockey East trophies.

BC didn’t win its second straight Beanpot trophy without having to work much harder than in 2015-16, though. In the first round the Eagles took on BU, which at the time was one of three teams that had recorded a win over BC in 2016-17. The Terriers gave the Eagles trouble all season long, and the semifinal meeting was no different. Newkirk opened the scoring just over a minute into the game, wristing a shot past Victoria Hanson on a 2-on-1 break with Caitrin Lonergan, but BU mounted a second-period comeback, as Nina Rodgers and Maddie Elia scored a pair of goals on the power play to leave BC searching for an answer entering the final period.

The Eagles got one, thanks once again to Newkirk and Lonergan, who was a freshman at the time. Midway through the frame, BC won a power play and capitalized on the opportunity. Kent picked up the puck in the BU zone and fed it to Newkirk, who curled toward goal before slamming a shot off the underside of the post to tie the game with 7:49 gone in the third. Lonergan then came up with the play of the contest, firing home a loose puck under Hanson with under three minutes to play for the game-winning goal.

In the final, the Eagles once again had a date with Northeastern, which would finish second in Hockey East in 2016-17. BC emerged victorious, but it had to use a third-period fightback to claim its second consecutive Beanpot crown. The teams were deadlocked at zero going into the third period, but the Huskies’ Kasidy Anderson received a clearance pass and beat Burt with a shot high into the net just one minute into the final period to put Northeastern in prime position for some revenge following the 2015-16 blowout loss.

Unfortunately for them, the Eagles weren’t going to let go of their crown so easily. Eight minutes into the period, Delaney Belinskas pushed the puck ahead to Kristyn Capizzano at the blue line, and the senior flew into the Northeastern zone before beating Bugalski over her stick to knot the game at one.

Four and a half minutes later, the Eagles had their winning moment, and they got it on the power play. Andie Anastos received the puck behind the net and slid it in the slot, where Erin Connolly managed to redirect a shot past Bugalski for the tournament-winning goal.

In 2017-18, BC once again struggled when it mattered most—falling in the first round of the NCAA Tournament to Ohio State—but continued its tradition of playing well in the Beanpot, downing Northeastern and then BU in a thrilling championship game to lift the trophy for the third consecutive season.

In the semifinal against the Huskies, it was Newkirk and Daryl Watts who made the difference, combining for five goals in a comfortable 5-2 victory to send the Eagles to the championship. Watts, then in the midst of a freshman season that would see her take home the Patty Kazmaier Award, struck twice in the opening frame, finishing a 1-on-1 just under nine minutes into the game before doubling the BC advantage with a backhand shot from the high slot.

Northeastern managed to even the score in the second, as Andrea Renner managed to place a shot below Burt to halve the Huskies’ deficit before Shelby Herrington managed to poke a shot home from the slot to tie the game, but Newkirk scored the first of her three goals just three minutes later to restore the BC advantage.

The Huskies thought they had tied the game again with four minutes left in the period but had a goal waved off for goaltender interference, and Newkirk scored twice more in the third period, with the second tally coming after Northeastern pulled Bugalski to try a last-ditch comeback effort, and the Eagles headed to the championship game for the third year in a row.

There, BC faced off against its Comm. Ave rivals, and for the second straight year, got all they could handle from the Terriers. Watts and Molly Slowe both recorded goals in the first period to send the Eagles to the locker room after one period with a two-goal advantage, but, much like in the semifinal, BU staged a second-period rally, scoring three goals in the span of five minutes to leave BC trailing after two periods.

The Eagles had to wait until late in the third period for an equalizer, but found it with four minutes to play, thanks again to Watts. Slowe sparked a breakaway with a great defensive play and passed to the BC freshman, who got a shot over Corinne Schroeder to send the game into a dramatic overtime.

The teams had played almost 15 minutes of the extra period when the Eagles found the winning goal. With under 30 seconds left on a BC power play, Newkirk gave the puck to Toni Ann Miano, who was left alone at the center point. Sensing opportunity, the BC defenseman slid down toward the top of the circle, beating Schroeder through traffic and giving the Eagles their third consecutive Beanpot in the most dramatic of fashions.

As the 2019 tournament is set to kick off, heroes of past tournaments like Trivigno and Burt have left, but a few—such as Newkirk, Watts, and Connolly—are back to once again lead BC against its Boston rivals. This season, all four teams arguably have a good shot to win, and if the Eagles are able to get past Harvard, they’ll have a stiff test against No. 3 Northeastern or No. 10 BU, both of whom have already recorded victories over BC this season. But if recent history is any indication, the Eagles should feel plenty confident about their chances against anyone. They are, after all, three-time defending champions.