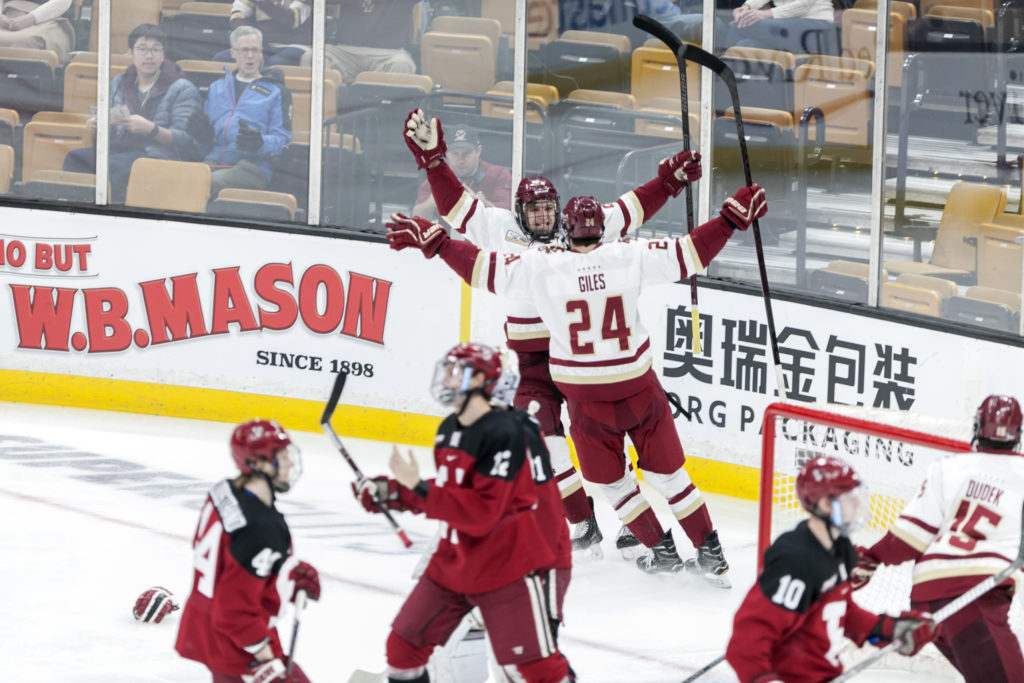 When Harvard’s Henry Bowlby knotted the game up at 1-1 with four minutes left in the second period of Monday night’s first-round Beanpot game, it seemed as if Boston College men’s hockey was once again going to fail to show up on the Boston hockey world’s biggest stage. After all, the Eagles had lost four straight games in the annual tournament, had failed to take advantage of numerous power plays and pull away from the Crimson, and had seemed to have lost all momentum.

When Crimson defenseman Adam Fox made an impressive save to deny a wraparound effort on what was practically an empty net from BC’s J.D. Dudek midway through period, it appeared as if TD Garden had simply become an ill-fated place for the Eagles to play.

Then, with eight minutes left to play, two years of sobering first-round exits were alleviated by two players that haven’t been around for the losing streak. The freshman duo of Jack McBain and Oliver Wahlstrom worked in tandem, and it was McBain who eventually buried a centering pass with a wrister from the low slot, lifting the Eagles to a narrow 2-1 win over the No. 17 Crimson.

It was a cathartic victory for BC (10-12-3, 9-4-3 Hockey East), which advanced to the Beanpot championship game next Monday for the first time since 2015-16. Not only did they end a two-year drought in the tournament, they also ended a two-year non-conference losing streak that dated back to November 2016.

It was especially positive for the team’s junior goaltender in Joseph Woll, who turned away 27 shots. Woll, after all, had kept his team in the game with several noteworthy saves—including a sprawling stop across the distance of the crease—and was finally able to shake off the burden of going winless in three previous Beanpot starts.

The Crimson (11-7-3, 8-5-2 ECAC) had the man advantage for the final 1:51 of game time after a penalty was called on Julius Mattila, but even though they boasted the nation’s most efficient power play coming in, they couldn’t crack Woll and the BC defense in what proved to be an insane final few minutes.

The Eagles found scoring earlier from an unexpected source: Patrick Giles. The freshman, who entered BC one of its lesser-known first year players behind the likes of NHL draftees Oliver Wahlstrom and Jack McBain, had registered just four points—all assists—in 22 games prior. The 6-foot-4 forward plays on the team’s fourth line alongside J.D. Dudek and Graham McPhee, and his linemates had combined for just five points on the year. On Monday, though, it didn’t take the line long to establish consistent rhythm, and the three teamed up for a strong opening goal just under five minutes into the game.

Dudek poked the puck loose in the neutral zone, sparking a 3-on-2 for the Eagles, and he quickly got it ahead to McPhee. The junior winger skated down the left side before centering it for Giles, who buried a wrister past Harvard’s Michael Lackey in the high slot. It was an impressive way to open his scoring ledger in a BC sweater, even more so as the team had failed to score a single goal in last year’s first round Beanpot game against Northeastern.

The game quickly delved into a physical, sloppy affair. The team saw three penalties called in the opening period, two of which were for cross-checking. The Eagles had two called on them but managed to hold the nation’s best power play off the board, an impressive effort. They narrowly held the Crimson off once Marc McLaughlin went to the box with 1:39 on the clock, as goaltender Joseph Woll had to deny Reilly Walsh and Adam Fox, who both had good looks on net.

The physicality only picked up in the second period—it took just 10 seconds for Harvard’s Baker Shore to be whistled for boarding. In a trend that would hold true for the entirety of the period, though, BC’s power play was largely ineffective. The team had one sequence of tic-tac passing that nearly generated a goal, as the team’s first line of David Cotton, Logan Hutsko, and Christopher Brown strung together passes to set up a deflection in front of the net, but Lackey was able to turn it away.

Dudek and Harvard’s Jack Drury promptly got in a shoving match shortly after and headed to the box with matching minors, and setting the stage for a lot of time without full strength. Bowlby would follow by racking up back-to-back hooking calls, much to the chagrin of the Edina, Minn. sophomore, but BC couldn’t do anything with them—and he redeemed himself quickly after.

Eventually, with a little over four minutes left in the second, Harvard’s John Marino scooped up a loose puck in his own defensive zone and skated the distance of the ice, settling to the right of the goal. Bowlby freed himself in the crease, and a deft pass from Marino was finished off with a one-timer on one knee. Bowlby’s equalizer seemed inevitable at points in the second, as Fox had already hit the left post five minutes prior. It paved the way for a whirlwind finish—nothing new for the two teams, as they’d gone to overtime in the consolation game last year.

This time, though, it didn’t end with the Crimson scoring the game-winning goal. As Woll was called upon for save after save, the Eagles strung together a couple of looks on the other end of the ice and eventually broke through. While it took Wahlstrom’s pass perfectly deflecting off a Harvard player’s skate and onto the waiting stick of McBain, it was a turn of events that seemed fitting for a team that’s been down on its luck.

The final two minutes—with Mattila in the box—were particularly stressful for head coach Jerry York and the Eagles. Still, they survived, securing a spot in the final against either Northeastern or Boston University, who met in the nightcap. Another loss would’ve likely set the team up for a disappointing stretch run, but now the team will play one week from Monday for the program’s 21st Beanpot title. Snapping two losing separate losing streaks in one night does wonders for your confidence, and that alone could be enough to spark this team toward big things in the final few weeks of the season.