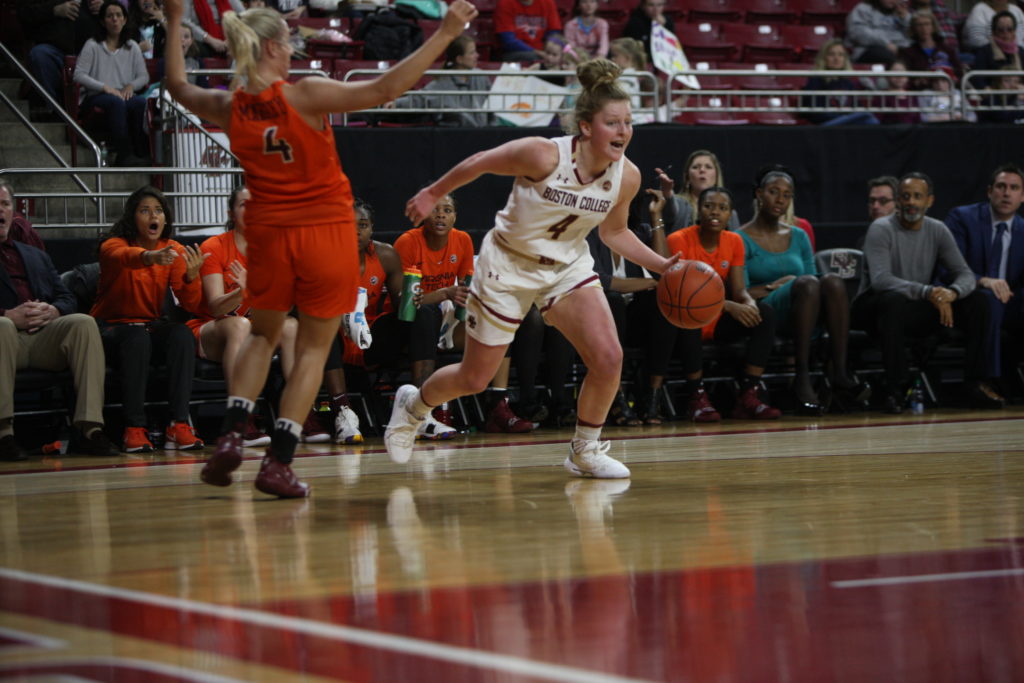 As Taylor Ortlepp dropped to the ground, grimacing and holding her ankle, three of her Boston College women’s basketball teammates helped carry her off the floor to a gracious ovation from the Conte Forum crowd. With just under two minutes left in the game, Ortlepp was forced to watch with an ice pack around her ankle as fans sat perplexed over how the junior’s season-high seven three-pointers were not enough to carry the Eagles to victory.

“That deflated us when she went down,” head coach Joanna Bernabei-McNamee said. “[Taylor] is a consummate hard worker, great leader, and when I say leader, she’s probably the most positive kid you’re ever gonna be around.”

Ortlepp’s 23 points helped to build a 16-point late third-quarter lead on Sunday, but it was a lead the Eagles could not protect. Regan Magarity and Dara Mabrey led the comeback effort for Virginia Tech, combining for 56 points while sporting a perfect 15-of-15 afternoon from the free throw line. The Hokies never quit, erasing the huge deficit by outscoring BC in the decisive fourth quarter, 33-15, en route to a 95-86 victory.

The Hokies (15-7, 2-7 Atlantic Coast) were swarming out of the gate. In the first 90 seconds,  VTech blitzed the Eagles (14-8, 3-6) by hitting a pair of triples and a jumper to open up a quick eight-point lead, forcing Bernabei-McNamee to call a timeout just 90 seconds into the contest. The Eagles responded, though, with Ortlepp nailing her first two 3-pointers and cutting the deficit to two. The first frame was characterized by up-and-down play, as well as hot shooting—VTech made its first eight shots from the field. Both teams were finding success from all over the floor, even combining to go 7-of-11 from beyond the arc in the first 10 minutes.

The Eagles carried a one-point lead into the second quarter, where both defenses began to settle in. Forwards Emma Guy and Magarity were locked in a battle underneath, both of them tirelessly jockeying for position in the paint. Magarity found more success, especially on the glass, when Guy picked up her second foul early on and was forced to the bench.

After the first quarter took the form of a 3-point shooting contest, VTech had trouble putting the ball in the basket in the second frame. The visitors suffered a scoring drought that lasted almost six minutes and notched just four points in the opening eight minutes of the quarter. BC capitalized on the Hokies’ scoring struggles, using 3-pointers from Ortlepp, Makayla Dickens, and Marnelle Garraud to go on a 13-0 run and open up a double-digit lead. Mabrey willed her team back, though, closing the quarter strong by hitting a pair of jumpers to cut the deficit to six at the halftime break. The perimeter continued to be BC’s preferred method of attack—in the first half, the Eagles made seven triples as compared to zero free throws.

BC continued its jump shooting onslaught early in the third quarter. Ortlepp kept finding pockets of space behind the line, where ball handlers—primarily Dickens, who had six assists—distributed her the rock, as VTech failed to close out, time and time again. The Australian junior added three more in the third quarter while Dickens made two of her own to extend the lead to the largest it would become at 16.

While BC continued to rain down deep shots, the Hokies attacked the paint. The 6-foot-3 Magarity was having her way down low and was responsible for 12 of VTech’s 21 third-quarter points. Despite facing the arduous task of fighting their way back into the game, the Hokies used the last 90 seconds of the third quarter to take a chunk out of BC’s lead. With the quarter about to expire, Mabrey hustled up the floor and pulled the trigger from a few feet past halfcourt. The desperation heave landed, cutting the Eagles’ advantage to single digits and shifting momentum toward the Hokies’ bench.

VTech used the opening minutes of the fourth quarter to take a hold of the contest for good. The Eagles appeared complacent with their lead and got very sloppy with the ball as a result. They coughed the rock up six times in the span of four minutes, turnovers which the Hokies were able to take advantage of on the other end. BC had relied on outside shooting in the first three quarters—only 22 of their 71 points had come in the paint. But in the fourth quarter, that well dried up. BC went 0-for-3 on 3-pointers while VTech used the deep ball to take over.

Aisha Sheppard provided a crucial fourth-quarter spark off the bench for the Hokies, especially after the Eagles reserves had outscored their VTech counterparts, 17-0, in the first half. Sheppard tallied all 14 of her points in the final frame off the strength of four 3-pointers, including three in a two-minute stretch to punctuate a 22-4 VTech run.

Ortlepp’s heartbreaking exit literally added injury to insult. The Eagles’ hero for much of the game, Ortlepp laid powerless near midcourt and then watched a near-certain victory evaporate in the matter of minutes. In the closing seconds, BC fought to claw its way back, but it simply traded baskets for VTech points at the charity stripe, where the Hokies shot 10-for-10 in the final minute of play.

The defeat comes at the heels of an inspiring win Thursday night in double overtime against Duke, where it seemed as if BC might have turned the corner on its end-of-game struggles. The contest on Sunday, however, looked characteristic of the Eagles’ bout the game before against Miami, where they saw another fourth-quarter lead disappear.