Boston College football and the number seven are practically a packaged deal at this point—after all, the Eagles have finished five of their past six seasons with seven wins. But on Thursday, the figure carried a far different, and more impressive, meaning.

The NFL announced its list of invitees for the March 4 scouting combine at Lucas Oil Stadium. Of the 300-plus prospects, a school record seven—Zach Allen, Chris Lindstrom, Tommy Sweeney, Lukas Denis, Will Harris, Hamp Cheevers, and Wyatt Ray—will be representing BC, the most in single-season program history and the second most in the ACC. As expected, Clemson and Alabama, which have claimed the past four national titles, lead the country with 11 invitees apiece. But only 13 other programs—Alabama and Clemson included—are sending more players to this year’s combine than BC.

Back in November, the Eagles broke another school record with 13 All-ACC selections. Cheevers, Lindstrom, and Sweeney were named to the First Team, Allen was picked for the Second Team, and Harris and Ray earned spots on the Third Team. Lukas Denis was the only BC player invited to this year’s combine who did not receive All-ACC accolades this season, but just a season ago he finished second in the nation in interceptions en route to Walter Camp All-American honors.

The past couple weeks—especially after a poor Senior Bowl performance—Allen has been popping in and out of the first round of mock drafts, but at the moment is slated to go No. 31 overall, according to CBS senior NFL writer Will Brinson. That would land the edge rusher with the Los Angeles Rams, alongside the best defensive lineman in the game—Defensive Player of the Year Aaron Donald—and his former teammate, strong safety John Johnson III.

If Allen isn’t the first BC player to be selected in the opening round since Luke Kuechly in 2012, Lindstrom could be the one to end the drought. The offensive guard wowed scouts and analysts at the Senior Bowl, and some outlets currently rate him as high as a top-three player at his position.

All seven invitees will likely hear their names called come April, and depending on BC’s Pro Day, another Eagle, perhaps a player like Connor Strachan, could convince a team to take a chance on them on Day Three.

Last year, three BC players—Harold Landry, Isaac Yiadom, and Kamrin Moore—participated in the combine. Landry was selected by the Tennessee Titans with the 41st overall pick, Yiadom was scooped up by the Denver Broncos with the second-to-last pick of Day Two, and Moore was taken by the New Orleans Saints at pick number 189 before being claimed off waivers by the New York Giants.

Once garnering the reputation of an O-Line U, BC is now renowned for producing NFL-caliber defensive backs. Not only is three-fourths of the Eagles’ 2018 secondary invited to this year’s combine, but BC has had four DBs selected in the past three years. Still, the Eagles’ 2019 Draft Class—arguably the deepest in program history—is about more than just one position group.

Twenty-four programs are sending six or more players to this year’s combine. BC is one of just three—the others being Ole Miss and Miami—that didn’t finish the season in either the Top 25 or the receiving votes section of the AP Poll.

wyatt ray
At Debate, UGBC Teams Agree on Diversity and Inclusion
Eagles Continue to Struggle Down Stretch in Overtime Loss to Virginia 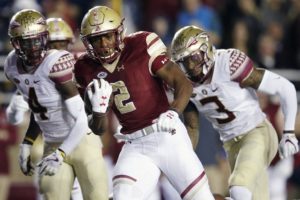 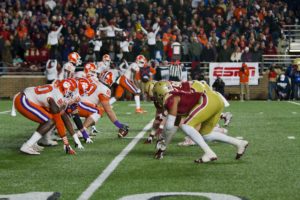 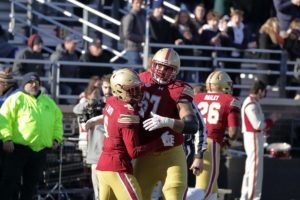