“Study hard, get a good job, find a good wife”—the 19th annual CSA x KSA Culture show “Have You Eaten Yet” showed off Asian culture while also poking fun at the stereotypes and expectations in East Asian culture. With nearly 200 voluntary student performers, the many skits, music, and dance brought some of the spirit of the Lunar New Year to Chestnut Hill.

The night began with a strong display of festive spirit. Traditional Chinese and Korean performing arts ushered in the evening—the first performance was a traditional Chinese lion dance, a style that mimics the movements of lions and takes inspiration from Chinese martial arts.

The next three performances all showcased Korean culture. The first was samulnori, a traditional Korean percussion performance. Student performers sat on the floor with various different percussion instruments, changing tempo and volume in harmony. Talchum, a masked dance, came next. The performance started out in darkness, but as the lights came on and the masks—which traditionally tell stories—were revealed, the audience was delighted at the spectacle. Finally, the Korean fan dance, buchaechum, featured all girls wearing Korean hanbok—the Korean traditional dress—and arranging fans to show beautiful images.

The next performances were Chinese yo-yo and Chinese ribbon dance. The Chinese yo-yo participants dazzled the audience with individual and group tricks, using nothing more than two sticks with a string and a giant yo-yo. The ribbon dancers started with an all-female group, creating flowing imagery with their ribbons to the tune of traditional music. The performance then took a more modern turn, however, as groups of all-male performers came on with more contemporary hip-hop music and shifted the tone from peaceful to high-energy, delighting the audience in the process.

Boston College dance group AerodynamiK came on next with their dance performance to various Korean pop songs, including the hit “Fire” by BTS, and American music such as Logic’s “1-800-273-8255” and Shawn Mendes’ “In My Blood.”

After a short intermission, the show resumed with the performance of dragon lanterns, where performers with lanterns entered from offstage, with nothing but their bright circular lanterns leading the way to the stage, where they created the body of a dragon with their lanterns.

Modern showcases of Chinese and Korean pop culture came next. In the C-pop showcase, dancers performed to Chinese pop music, especially of the hip-hop genre, which has recently seen a rise in popularity in mainland China. Singers came onstage and sang popular Chinese songs of both old and new that stirred up memories among the audience members. The K-pop dance showcase featured popular music from current Korean idol artists that elicited cheers from fans in the audience. The K-pop singers demonstrated an impressive range of vocals with their songs.

The final performances were modern acts that saw different groups—boys, girls, couples, and seniors—come onstage to to exemplify culture changes and the diversity of Asian culture.

In line with the theme of the culture show, a skit about a couple going home for New Year’s celebrations was weaved throughout the show in between performances. The skit is about a more recent Asian American immigrant bringing home his fourth-generation Asian American girlfriend, and the difference in culture between their households.

The skit also shows the different ways that Asian parents show love toward their kids—especially through food—and how cultural clashes between the traditional Asian and American cause rifts but also growth in immigrant households. The skit explores the Asian American experience, and the audience could clearly relate as different moments prompted laughter or groans: When the girlfriend asked for a fork because she “never learned how to use chopsticks,” the audience let out an exasperated sigh.

The CSA x KSA Culture Show blended the old with the new, showing both traditional culture and the evolution and impact of modern pop culture. The culture show included a dazzling array of performances that brought some of the cheer of the New Year to BC. 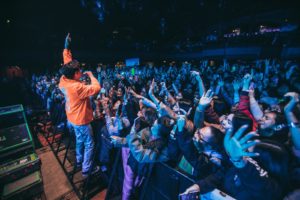