Home » No. 1 BC Starts Season With Dominant Victory Against BU 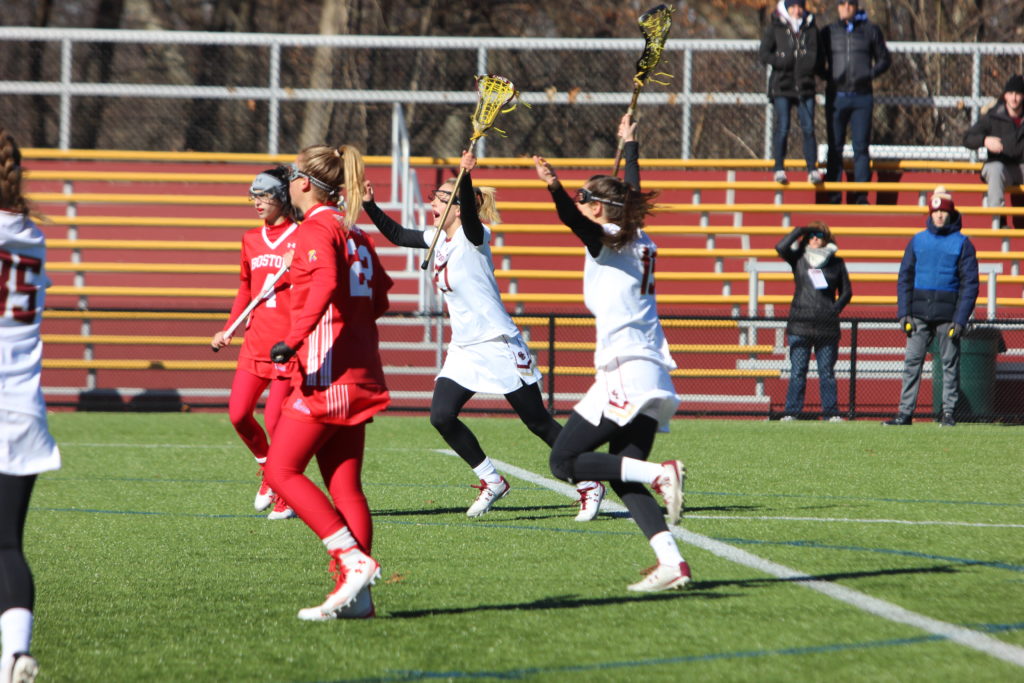 No. 1 BC Starts Season With Dominant Victory Against BU

Kenzie Kent—a dual-sport athlete who redshirted last season to preserve her final year of eligibility for a full 2019 campaign—hadn’t played a game for Boston College lacrosse in 622 days before Saturday afternoon’s season opener against Boston University. Not only that, but she hadn’t worn an Eagles uniform since BC women’s hockey was bounced in the first round of last year’s NCAA Tournament: March 10, 2018, in other words, 336 days.

“It’s the longest I’ve waited since I’ve been in college, so I was very anxious and eager for this game to start—I’ve been looking forward to it for a very long time, over a year,” Kent said afterward.

Despite the time lapse, a period in which the program lost its second consecutive National Championship, Kent didn’t miss a beat. Instead, she picked up right where she left off—literally. The graduate student found the back of the net within the first 24 seconds of regulation en route to a nine-point performance, one shy of her career high, which she last tied against Maryland in the 2017 national title game. She was one of three Eagles to finish with four-plus points, as BC thumped its Green Line rival, 20-6.

The No. 1 Eagles (1-0) entered the game having beaten the Terriers (0-1) in each of the teams’ past nine meetings, totaling 15 or more goals in six of those victories. It wasn’t long before it was safe to assume that BC would once again reach that mark. In large part thanks to a Cara Urbank hat trick, the Eagles logged five goals in as many minutes, putting the game out of reach in a heartbeat.

Reigning Tewaaraton Award winner Sam Apuzzo won the opening draw control and, seconds later, Dempsey Arsenault sped downfield, eying Kent on the perimeter. Her pass was deflected, but the graduate student corralled the loose ball and reset the offense. Soon after, she cashed in on her first goal of the season.

About two minutes later, Kent reentered the box score, only this time she was the one creating the open shot. After jogging behind the cage, she lofted a pass over the net to Urbank, who was cutting through the heart of the BU defense and promptly beat Terriers goaltender Kennady Smith to give BC a two-goal advantage. Following an Arsenault free-position goal, Urbank replicated her previous scoring play, lurking past defenders, receiving a behind-the-cage Apuzzo pass, and finishing on net for her second strike of the day.

Urbank tied off the hat trick with another goal, just 24 seconds later, courtesy of a Jordin Lappin assist. Up, 5-0, the Eagles looked practically unstoppable—they had won five of the first six draws; outshot BU, 6-1; and had yet to commit a turnover.

Perhaps in attempt to slow down BC, the Terriers began to foul. Normally a physical opponent, BU tallied 18 fouls on Saturday—10 more than BC—including eight in the first 12 minutes of action. But the whistles did more harm than good for BU. Head coach Acacia Walker-Weinstein’s team converted eight of its 15 free-position attempts, one of which resulted in the Eagles’ sixth goal of the game: Sheila Rietano sprinted to the cage and hurled a shot past Smith to cap a 6-0 BC run.

Eventually, though, the Terriers got on the board. Recording BU’s second shot on the day and first since the opening minute, Ava Barry made the most of a Kelly Matthews pass, finding twine for her team’s first goal of the year. For a moment, it appeared as if the Terriers were picking up speed, as they won the ensuing draw control—but a BU push would have to wait a few minutes.

In the meantime, BC scored five of the game’s next six goals. It all started with Kent, who tallied three in the span of two minutes and 57 seconds. Facing a 9-1 deficit, Barry capitalized on a Christina Walsh foul and netted a free-position goal. Yet that Terriers’ scoring play was simply sandwiched between two Eagles scoring spurts. The back half of the surge was piloted by Jillian Reilly and Apuzzo, both of whom recorded free-position goals of their own.

For Apuzzo, it was her first time finding the back of the net all day—an outcome that speaks to none other than the Eagles’ depth and Apuzzo’s selfless play style, according to Walker-Weinstein.

“Sam’s not thinking about her points, she’s thinking about the team production and offensive production,” she said. “I knew that that was happening, but I wouldn’t be surprised if Sam wasn’t bothered by it at all.”

Leading 11-2, BC was clearly in the driver’s seat, but the Eagles’ offense came to a halt in the final 11 minutes of the half. Sloppy passing paved the way for five turnovers, allowing BU to see more time on the attack than ever before. Although the Terriers struggled to generate shots initially, Kaitlin Belval and Matthews soon turned a pair of rebounds into goals, entering the break down, 11-4.

The late-period scoring drought was only a blip on the radar for BC, though. The Eagles came out of halftime looking like their normal selves. In fact, BC—a team that was victorious on 60.6 percent of its draws last season—won the first six in the back half of play, setting the stage for a 9-0 run.

Urbank and Lappin got things going with back-to-back scoring plays. Then, Kent and Apuzzo teamed up for two goals—on both occasions, Kent located a wide-open Apuzzo, and the senior playmaker finished with ease. Recording her ninth and final point of the game, Kent took matters into her own hands shortly thereafter, firing a shot past Smith from about five feet in front of the crease.

Once Rietano notched her second goal of the day, BC wrapped up its scoring spree with three consecutive free-position shots on net. First it was Arsenault who stepped up to the plate and delivered, and then Taylor Walker served as the anchor of sorts, logging the Eagles’ final two goals, chasing Smith in the process. BU tacked on a pair of late-game goals with under five minutes to go, but BC had already made a statement.

Kent is back, and so are the top-ranked Eagles.