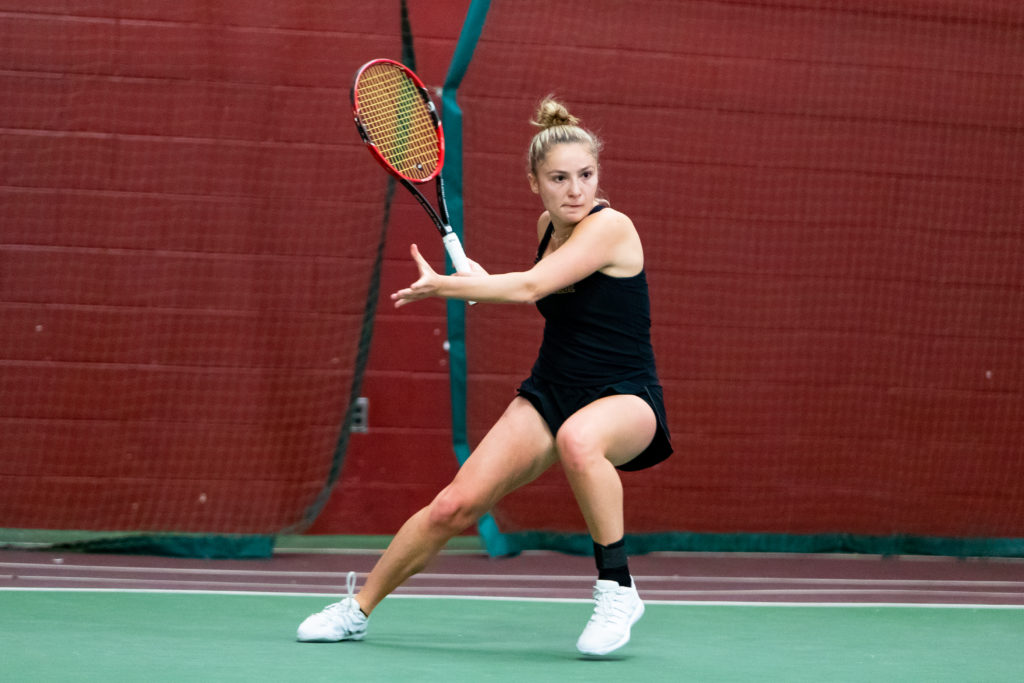 Last week, Boston College women’s tennis recorded arguably its biggest win in program history when it knocked off No. 10 Syracuse—the first time the team had ever defeated a top-10 opponent. It helped the Eagles stay undefeated, and they carried that momentum into the weekend. With a Saturday double header on deck against Boston University and Rhode Island, BC did not slow down, effortlessly completing the weekend sweep with a 6-1 victory over BU and a 7-0 triumph over Rhode Island.

The Terriers (3-2) were the first team to visit the Flynn Recreation Complex, and while BU put up a solid fight—forcing four matches to go to three sets—the Eagles ultimately came out on top. Ever since the Harvard matchup on Feb. 1, head coach Nigel Bentley has trotted out Jackie Urbinati and Yufei Long as his first doubles team. While Urbinati and Long lost a close 7-5 set last time out against Syracuse, they redeemed themselves with a 6-2 victory over BU’s Shelly Yaloz and Emily Kim. Kylie Wilcox and Natasha Irani then notched a 6-3 win to clinch the doubles point for the Eagles.

In singles, BC was pushed. Long looked well on her way to victory after dominating Remi Ramos in the first set, 6-0, but Ramos stormed back and forced a third set. Long prevailed, though, and set the tone for a resilient singles performance. Kylie Wilcox found herself in a battle as well, but the junior sealed the victory with a strong performance in the third frame, beating Yaloz, 6-2. Then, Irani picked up a straight-set win over Kim. Freshman Laura Lopez continued her breakout season, topping Sabrina Faybyshev, 7-5, 7-5. Elene Tsokilauri was the only Eagle to drop her singles contest, but it was a three-set fight. Maria Ross rounded out BC’s single lineup with a three-set victory of her own.

Compared to BU, URI has struggled this year, stumbling to a 1-3 record prior to Saturday afternoon’s match. The Rams once again faltered against the stiff competition that BC provided. While the Terriers made the match interesting by drawing out several three-set matches, URI could not do the same—in fact, the Rams lost all of their matches to the Eagles in straight-set decisions.

BC was once again able to display its prowess in the doubles game. Urbinati and Long further developed their chemistry by winning, 6-3, over Erin Chratian and Mihaela Codreanu. Bentley switched up his doubles lineup for the second match of the day, and it worked splendidly as Reagan Posorske and Loren Haukova beat Halah Davis and Sydney Chratian, 6-0. So far this season, the Eagles have not lost the doubles point, and that allows Bentley’s squad to head into singles play each time with plenty of momentum.

Just like it has done for most of the season, BC dominated in singles. Long, after dueling with Ramos for three sets, found a much easier opponent in Erin Chratian, coasting to a 6-1, 6-0 win. Wilcox was also dominant, overpowering Codreanu in a straight-set victory. Not losing a step, Lopez notched a 6-0, 6-1 victory over Ariel Haber. Ross and Haukova followed suit, but Marion Conklin faced more of a challenge. After Conklin won the first set, 6-3, Sydney Chratian forced a tiebreaker in the second, but Conklin triumphed to clinch the sweep.

Even though Eagles showcased their talent on numerous occasions last year, they were plagued by inconsistency and never quite reached their full potential, finishing with 13 wins. This season, though, ACC play hasn’t even fully kicked off, and BC has already tallied nine wins. With a combination of veteran talent like Wilcox and Urbinati and newcomers, such as Long and Lopez, this team is firing on all cylinders and has a high chance of improving upon its mark of five conference wins from last season. Victories will be much harder to come by against tough conference foes, but as the Eagles demonstrated in their upset of Syracuse, they have the talent to make some noise in the ACC.