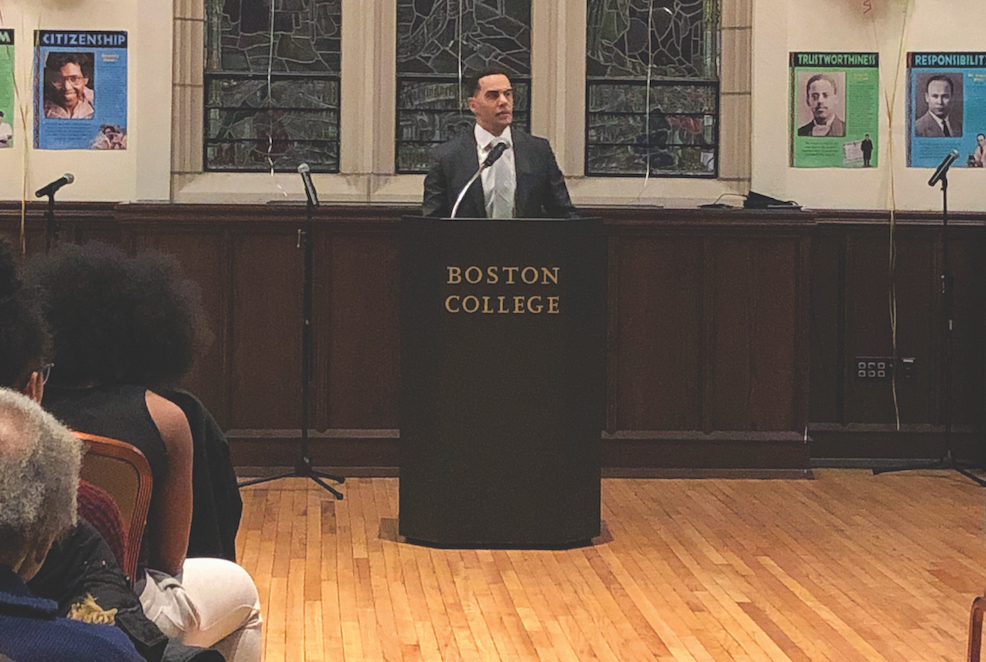 The Thea Bowman AHANA and Intercultural Center (BAIC) hosted a Black History Month Opening Celebration titled “Still I Rise” on Wednesday. During the event, the BAIC hosted speaker Steve Pemberton, ’89, Hon. ’15, current member of the Board of Trustees, and featured performances by F.I.S.T.S., (Females Incorporating Sisterhood Through Step) PATU (Presenting Africa to You), Voices of Imani, B.E.A.T.S. (Black Experience in America Through Song), and BC Slam! (Soul, Love, and Meaning).

Interim Vice President of Student Affairs Joy Moore gave welcoming remarks, and Danielle Date, assistant director of the BAIC, led a prayer to set the tone for the celebration. Both addressed the importance of not only the celebration for BC’s black community, but also the significance of Black History Month for the world in general.

“Although our history is one which endured many struggles, challenges, and hardships along the way, we are not bitter, we are better,” Moore said.

Miya Coleman, MCAS ’19, opened the first portion of performances for the celebration and recited the poem, “Still I Rise,” by Maya Angelou. The performances that followed included a spoken word performance by Grace Assogba, MCAS ’22, and Latifat Odetunde, MCAS ’22, which revealed the injustices that black women faced in history and grapple with today, with the intention of turning “HIStory to HERstory,” as they said in the performance.

Introduced by Amaka Nnaeto, MCAS ’20, Pemberton spoke about how he overcame struggles in his life as a child, at BC, and as a person of color in the professional world. He encouraged students to be the best they can be during their time at BC and to take advantage of the opportunities they are currently presented with. He noted that backing down and being defeated is not an option for black people, as it is always time to be the best you can be.

Students and faculty listened carefully to Pemberton speak about how hard it was for him to  find belonging as a child raised in the foster care system, and his eventual search for his biological family. After getting in contact with his biological family, he read a letter that his alcoholic mother wrote to her father asking for money, Pemberton said. He discussed the implications this deviation had on his young life after he found that this letter included the names of all his mother’s children except him.

It was in that moment, Pemberton said, that he realized he was excluded from his biological mother’s letter because his father was black. Pemberton added that BC was the closest thing to family he could find growing up because of this letter, the injustices he faced as a black child in the foster care system, and his failed attempt to find connection with his biological family.

“I am not now, nor have I ever, been in the business of retreat,” Pemberton said. “Our ancestors will only smile at our responses to struggle, so [we cannot] accept any label that we are beneath or below, unaccepted, marginalized.”

With his story, Pemberton advised that students utilize education and become informed citizens as a means of rebellion. He addressed the importance of protest but furthered his argument that education is the key for tangible changes in the black community.

“I see you, I see you want to respond to the incredible dissonance and cynicism in society, so sit in the front of the class, go to law school, so that you’re the African American female judge who sentences the police officer who thinks that it’s okay to gun down young black boys the age of my son,” Pemberton said.

As an adult, Pemberton said his professional counterparts would comment on how polished and intellectual he seemed for a black man, and told the audience that neither he nor any other black person should be considered an aberration or an exception. He said that black people are a strong reflection of the history that has been in their blood since the beginning of time, and closed by noting that Black History Month is the perfect time to keep this in mind now and for the future.

“It is time now to fully understand and embrace knowledge and celebrate our history, our contribution, and to direct it a purposeful way so that future generations who are counting on us know that this institution, this society, has a place for them too,” Pemberton said. “That is our expectation, and that is our gift.”

After a standing ovation for Pemberton, Coleman performed “Ode to the Negro National Anthem,” followed by numbers from B.E.A.T.S. and F.I.S.T.S., featuring an appearance by BC’s first tenured Black professor, Charles F. Smith Jr., which resulted in a final standing ovation. 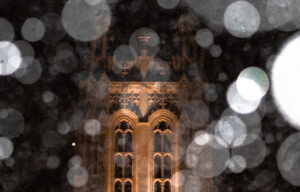