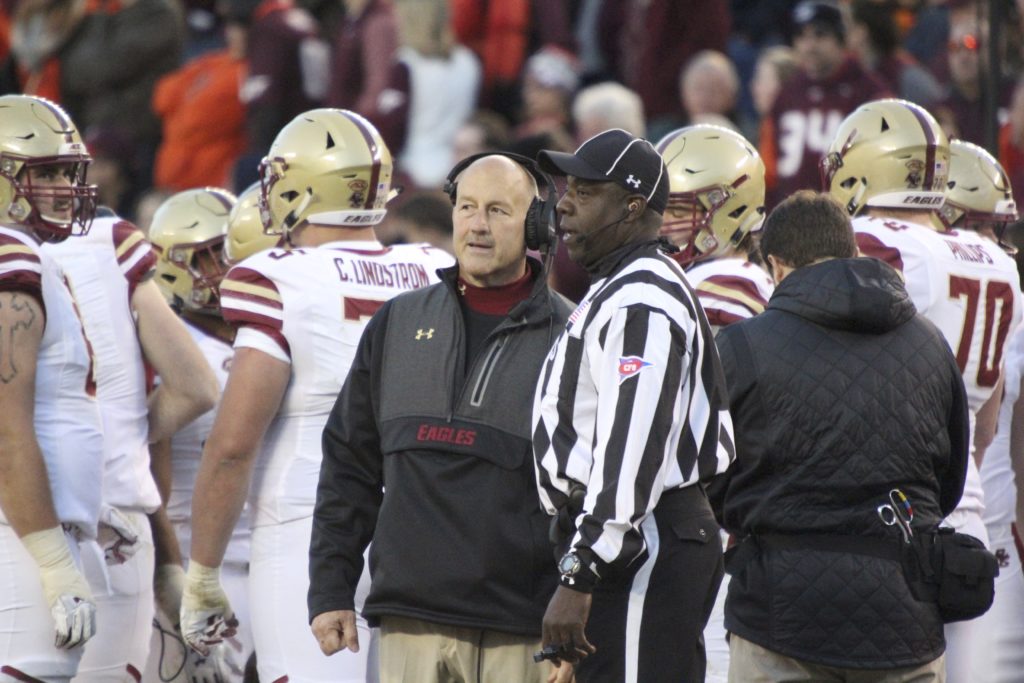 When Boston College football head coach Steve Addazio’s contract extension was announced in December, it was met with groans from the collective fanbase. Addazio, in his six years on the Heights, has compiled a 38-38 record, finishing with seven wins in five of the seasons.

On Monday afternoon, though, that fanbase was given a reason to react quite differently.

Four-star offensive lineman Kevin Pyne, a product of Milford, Mass., announced on Twitter that he was committing to Addazio and the Eagles. The 6-foot-8, 285-pound offensive tackle is the No. 3 offensive tackle in the country for the 2020 cycle and the No. 23 recruit overall, per Rivals, and opted for BC over the likes of an abundance of prolific programs.

He immediately becomes the cornerstone of a class that could be Addazio’s best since his arrival. Pyne, per the same Rivals rankings, is easily the highest-regarded incoming recruit in Addazio’s tenure. This much was clear by the plethora of offers that the Milford High School lineman held, with two College Football Playoff teams and plenty of other familiar names all interested in him.

ESPN has him as the No. 10 offensive tackle and No. 71 overall in his class, while 247Sports was slightly more conservative, ranking him 13th and 108th, respectively. Regardless, Pyne is an impressive get for a program that faded down the stretch in 2018. This year’s class, which featured a lone four-star recruit in running back Patrick Garwo, was slotted at 60th in the country. With Pyne leading the way, Addazio’s next class is already getting off on the right foot.

Pyne will join a long line of talented offensive lineman to suit up in Chestnut Hill. This year, BC placed a program-record 13 players on All-ACC teams, and three of those—offensive guard Chris Lindstrom, center Jon Baker, and offensive tackle Ben Petrula—played up front. He’ll likely have an immediate chance to contribute in 2020, as the Eagles are losing three-fifths of their starting line this offseason and only Petrula will remain the year after. Forecasting that far ahead is often futile, but Addazio has shown no qualms in using freshmen out of the gate on his offensive line.

Addazio’s staff has shown the ability to develop talent well on the line, too, so the fact that Pyne will arrive as one of the best at his position is more than promising. By comparison, none of BC’s five starting lineman this season—even with three earning all-conference honors—entered with anything close to the same hype, all boasting three-star ratings.

Time will tell if Pyne comes to BC and lives up to his high billing, but at the very least, Monday’s news inspires some confidence in Addazio.